After days of negotiations being held between the two CIS organizations, Winstrike and Na’ Vi. Natus Vincere has finally announced the signing of Kirill ‘Boombl4’ Mikhailov as Ioann ‘Edward’ Sukhariev departs.


Edward for now has been loaned by Wintrike and is on a trial period with the team as their new in-game leader. This is the first change ever for the player apart from a small stint with Astana Dragons back in 2013 for a duration of just 4 months. He is one of the original member of the team and has served for a really long time.

Na’ Vi has been struggling quite a lot lately which has led the organization to go ahead and make a few changes. This is the first roster change that the team has made in the last 18 months.

The community had shown great distress after they were tired of seeing Oleksandr ‘s1mple’ Kostyliev carry the team single handedly in more than one occasion while the team struggled to keep up. The fans and critics were voicing various opinions, but the most common amongst them was the one suggesting the replacement of either Egor ‘flamie’ Vasilyev or Edward.

It seems as if the organization had planned something similar. Edward who played the role of an ‘Entry Fragger’ had not been performing all that well. And this struggle had been going on for a long time now, his stats confirm how inconsistent the player had been lately with the overall rating (HLTV) tumbling quite low in the last few years. 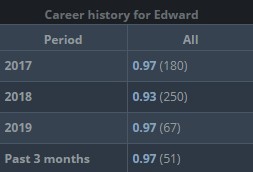 Boombl4 on the other hand has been playing really well lately and belonging to the CIS region just helps him adjust well within the team, the in-game communication will also not be a big hassle for the young athlete.

Along with hopeful transfer of Edward to their side, Winstrike announced the signing of Aleksey ‘El1an’ Gusev yesterday. The 19 year old youngster had been standing-in for the side at the UCC Summer Smash, where he put up a solid performance and impressed the side enough to get him onboard.

El1an has successfully replaced Georgi ‘WorldEdit’ Yaskin as part of an ongoing rejuvenating process, set in motion by their coach Ivan ‘Johnta’ Shevtsov.

The deal is being made at a time when Na’ Vi has almost a month before their next event, ESL One Cologne 2019. Giving them room to settle-in their new squad and enough time to step into the event fully prepared. Winstrike also have their CIS Closed Qualifier for the Berlin Major 2019 coming up in sometime and with Edward already having started practising with Winstrike, the team has a great chance of making it through.

This said, it appears to be a win-win deal for the two organizations. Belonging to the same region the two want players who are fluent in Russian. Along with this, the two teams are getting exactly what they seek. Na' Vi are getting a young player in their squad (Boombl4) while Winstrike who have already picked a young player (El1an) are trading to get someone more experienced (Edward), which will bring some rigidity and balance to the side.

The updated Na’ Vi and Winstrike line-up is as follows,