MiTH reign above all to win the SEA Fire Championship 2018

The SEA Fire Championship 2018 continued with the Playoffs being held on the final day of the tournament.  The semifinal showdown witnessed some intense matches being played between the four teams that qualified through the Group Stages followed by the Grand Finale, the winner of which would be crowned as the champion along with being presented with a cash prize of $4,500 USD.

This is how the Playoffs went down on the final day of the event, 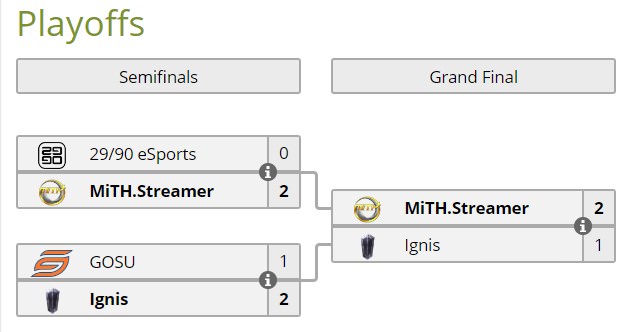 29/90 eSports, the first team that made it through to the Playoffs were no match against the might of the Thai team MiTH.Streamer, who beat them in two straight matches with a series score of ‘2-0’.

The first match saw the two teams fight it out on Inferno where MiTH.Streamer took a huge lead in the first half. 29/90 fought back in the latter half and tried to come back into the match but the lead attained by MiTH helped them limp their way to victory as they took down 29/90 with a score of ‘16-12’.

The second match was held on Mirage where the first half witnessed really heavy competition from both the sides but MiTH took the win in the second half backed by a solid T-sided run that helped them gather multiple rounds in quick succession. MiTH beat 29/90 with a score of ‘16-12’.

29/90 eSports were eliminated from the championship as MiTH.Streamer moved on to the Finals.

GOSU took on Ignis in the second semifinal match-up of the day. The series which went down to the wire was one of the best, so far.

Ignis took the victory on Mirage with a score of ‘16-10’. The two teams put on a fantastic game of CS going hard at each other right from the very first second. Exchanging the rounds competitively in the first half, Ignis was the one to break the loop and ran away with the match backed by some incredible rushes and death-defying skills.

GOSU held nerves of steel in the second match as they took down Ignis on Train with the scoreboard reading ‘16-9’. Although under immense pressure, GOSU operated calmly and effectively taking rounds away from Ignis even after facing multiple 3v5 or 2v1 situations.

The decider between the two teams, GOSU and Ignis was played on Inferno where the two teams were at each other's neck, punishing the slightest mistake that the other was foolish enough to commit. Ignis were the ones who were able to clutch out a win this time around as they defeated GOSU with a score of ‘16-14’.

GOSU move on to the Finals to face-off against MiTH.Streamer whereas Ignis gets cut short on their path to victory.

The finals took place between the Thai team, MiTH.Streamer going up against the Japanese powerhouse, Ignis.

The two teams clashed on Dust 2 in their first match where a heavy competition ensued on for a long time, forcing the match to go into overtime. The first overtime would have gone the way of Ignis but MiTH.Streamer ensured their safety by winning two rounds in succession and turned the tables on their opponents by winning the match in the second overtime with a score of ‘22-20’.

The second match marked a comeback for Ignis on Inferno. Ignis although under immense pressure continued to play a bit aggressive, going for wide peaks and confident smoke rushes and surprisingly everything worked in their favour which led them to a comfortable victory with the scoreboard reading ‘16-10’.

Both the teams played out the decider on Train, almost similar in skill and experience the difference lied in execution and confidence. Both the teams fought tooth and nail, intensity rising with each passing round. The first half witnessed Ignis coming out on top with a small lead but MiTH came back from behind once again to scramble up their set momentum and started string several rounds together which helped them attain victory over Ignis with a score of ‘16-14’.

MiTH.Streamer reigned above everyone after a hard-fought tournament finally came to an end. MiTH will be walking away as the champions of the SEA Fire Championship 2018 along with a cash prize of $4,500 USD.