Day 5 of the Supermajor saw only lower bracket matches as 4 teams left the competition ending their DPC 2017-18 journey.

The day kicked off with possibly the most anticipated match of the tournament, the two NA giants facing off against each other. Obviously, PPD’s and Zal’s previous stints with EG make the matchup more personal and Sumail and PPD’s go at each other on Twitter earlier in the season obviously made the encounter spicy. 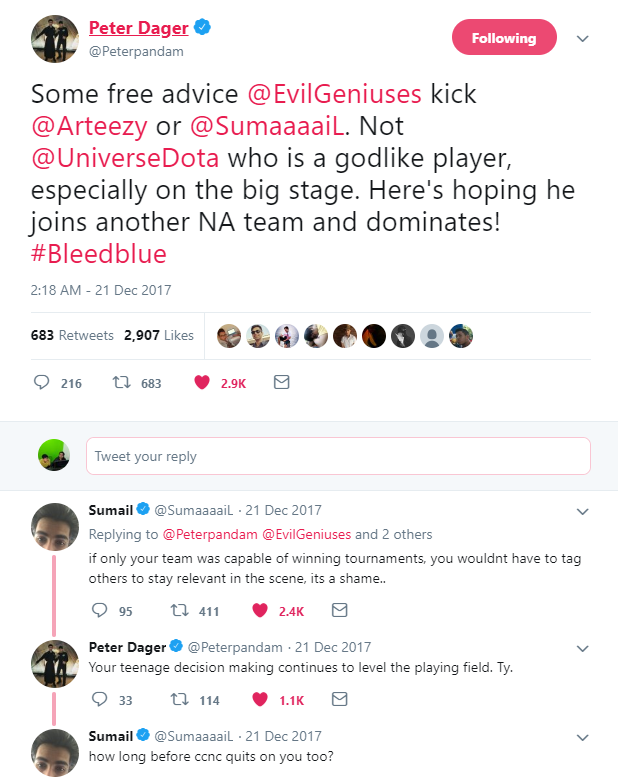 Both teams had a solid draft in game 1, but just like many games in the past OpTic’s offlaner 33 took it upon himself to win the game for his team. He was involved in 22 of the 27 kills his team got as they repeatedly found Arteezy in the mid game shutting him down quite effectively. It was a close game till about 30 minutes or so but EG spiralled out of control with 33’s Beastmaster taking over the map and constantly keeping EG on their toes.

In game 2, OpTic rendered s4’s NS useless picking a tanky tri core of Omniknight, Visage and DK who were near impossible to gank. OpTic’s sustain in teamfights along with their tower taking ability made for a pretty potent combination that EG could only beat in the late game. However, OpTic never allowed them the luxury and space to reach there, finishing the game by 37 minutes and taking the series 2-0.

TNC need to finish in the top to qualify for TI8 directly and they took a step in the right direction taking down VG.J Storm in the lower brackets. After losing game 1, both Armel and Raven stepped up massively to win 2 straight games and take the series. Game 3 was quite close and for a moment it looked like Resolution’s PL would be able to carry Storm through but Armel’s 28-1 Mirana performance was enough to get the win.

VG persevere in a 3 hour series against Mineski

Mineski bowed out of the Supermajor after a gruelling 2-1 defeat in the hands of VG. Game 1 was a 1.5 hour long bloodbath where Moon picked up 30 kills on his Storm Spirit. However, Mushi’s WK was unable to do too much with VG having tons of control. He redeemed himself in game 2 with a solid performance on Luna. His CK looked like it could carry Mineski in the lategame with VG lacking any real carries, but the Chinese side never really allowed any space for the CK. An underfarmed CK was unable to have too much impact and Moon went for the desperation play with a Divine Rapier pickup on his Gyrocopter. Unfortunately it was too late by then as VG took down the throne to take the series.

The last game of the day was an all Chinese showdown and both sides looked poised for a lategame showdown. But Sccc and Moogy had already crippled Thunder with devastating performances on the Zeus and Slark making their lategame much easier to execute. In game 2, Thunder picked up the Slardar for Sylar but he wasn’t able to have the same impact that Moogy had in game 1. Thunder’s lack of burst hampered their ability to kill Moogy’s Weaver and the hero soon snowballed out of control. Newbee forced the gg at round the hour mark, taking the series 2-0.