The IEM Sydney 2019 continued on with the Playoffs starting today. In the first clash of the day, MIBR went up against Mousesports, knocking them out of the event after beating them in two back-to-back matches. With the ‘2-0’ victory MIBR moves ahead to face Team Liquid in the semifinals.

This is how the map veto went, 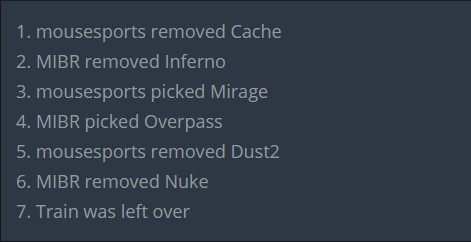 The first match on Mirage was quite a struggle as both the teams wanted to best the other in order to get a strong start by achieving an early victory. MIBR playing as CT was able to gather a good lead in the first half but mouz was able to turn things around in the latter half by eight rounds in succession.

The match went on to second overtime after which went in favour of MIBR. Fer playing away from the squad was able to constantly pick off favourable duels which always gave MIBR good opening along with plenty of information to work with. Even coldzera was in top form holding his own with an HLTV rating of 1.25.

The match continued with the teams fighting it out on Overpass where MIBR once again went on to gain an advantage over the opposition. Mouz did give hope of a comeback as they started strong in the second half but MIBR shut them down hard by winning four rounds in succession which they converted into another victory for them.

Though Mouz gave MIBR a great fight they could not make their way past the Brazilian juggernauts. Woxic and chrisj played a big part in their effort to topple MIBR holding an overall HLTV rating of 1.15 & 1.11 respectively.

With this mouz has been eliminated from the event as MIBR prepare themselves to take on Liquid in the semifinals tomorrow at 10:30 IST.