A lot was on the line as Team Secret went up against Liquid, both teams being captained by two legends of Dota and former teammates as well as friends. But along with with the old guard, both Kuroky and Puppey have been responsible for grooming a new breed of young talent, the likes of whom have taken over the Dota world by storm. The matchup encompassed all these feelings. Two legendary captains, leading two great teams of young talented stars and with elimination just around the corner for one of them, everything was on the line.


Game 1: Cheese vs cheese but Liquid come out ahead


Secret made a big mistake by not banning the Matumbaman Broodmother and he took over the early game as Secret’s laning phase fell apart. Ace’s Alchemist was pressured heavily no matter where he went and it looked like Liquid would force a quick gg out of Secret. However, Secret cut their losses and farmed whatever little they could, eventually mustering up a Radiance on Alchemist. At around the 26-minute mark, despite Liquid being ahead by 5k gold, a clutch initiation by Yapzor allowed Secret to wipe Liquid giving them some hope of getting back into the game.

However, once Liquid respawned, they found repeated kills on Midone who was already very far behind with Miracle and Gh chaining their silences perfectly to control the elusive hero. Secret were relegated to their base and resorted to using a very cheesy play involving Chen’s send-back and Storm’s zip to keep the creeps from reaching their base. However, Liquid still farmed the whole map and built up a 20k gold advantage, eventually using it to brute force highground and take the gg. A dominating early game followed by complete map control allowed Liquid to take a labored but ultimately comfortable victory in game 1.


For the second time in a row, Secret didn’t show Matu’s Broodmother the respect it deserved and just like game 1, they were punished heavily for it. This time starting off in the bot lane, Broodmother once again took over Secret’s jungle and created acres of space for Miracle and Mind_Control to come online. Secret tried to experiment with Midone’s MK and Ace’s PL but Team Liquid had the superior teamfight as Invoker, WW and Dark Willow provided too much aoe control and damage for Secret to deal with. Just like game 1, Secret were forced to huddle up in their base as Liquid farmed the entire map and built up a massive lead. With the Liquid players all on their comfort heroes, they played a safe and no-nonsense game and closed the game pretty comfortably. Secret’s refusal to not ban Broodmother against Liquid cost them heavily and they now find themselves eliminated in 5th/6th place, their best finish at a TI ever. 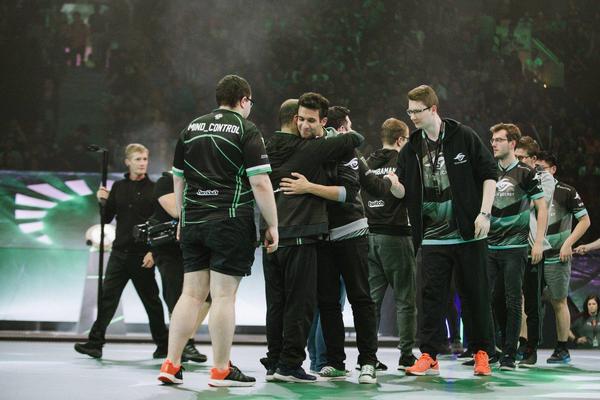 Respect pours out from both teams after the series
Source: @DOTA2