Lotac, Tigers and Team Admiral knocked out from the Bucharest Minor: Open Qualifiers

In a shocking turn of events, the winner of the first Minor of the season: Tigers were eliminated from the open qualifiers of the Bucharest Minor 2019 at the hands of Sterling Global Dragons. With the favourites being eliminated from the tournament, the two slots in the SEA Open Qualifiers remain wide open for the taking.

Clutch Gamers who look like they’ve finally settled upon a roster, looked quite impressive in the SEA Open Qualifiers when taking down EVOS Esports for a spot in the quarterfinals.

Sterling Global Dragons had one of the harder paths to the quarterfinals, having to go up against Goliath and Tigers. But both teams were convincingly beaten, as SGD performed spectacularly on the day, successfully utilizing their coordination and securing a quarterfinals berth.

The SEA Open qualifiers also saw more shocking upsets, as 4SGK brought down Team Admiral in their Round of 16 match to book a spot in the quarterfinals and Team Momo eliminating Lotac in their round of 32 match. Momo would unfortunately, lose to ZeusSEA in the next round.

WG.Unity had to tackle the hard-path to find themselves in the quarterfinals, bringing down Alpha Red and Execration in their first two matches before beating Psdn in their Round of 16 matchup.

ArkAngel, Neon Esports, and BigBrain have also made it to the quarterfinals. With the road to the Closed Qualifiers now wide open, which team will capitalize on the opportunity and begin their road to the Minor? Here’s today’s bracket to help you figure that out. 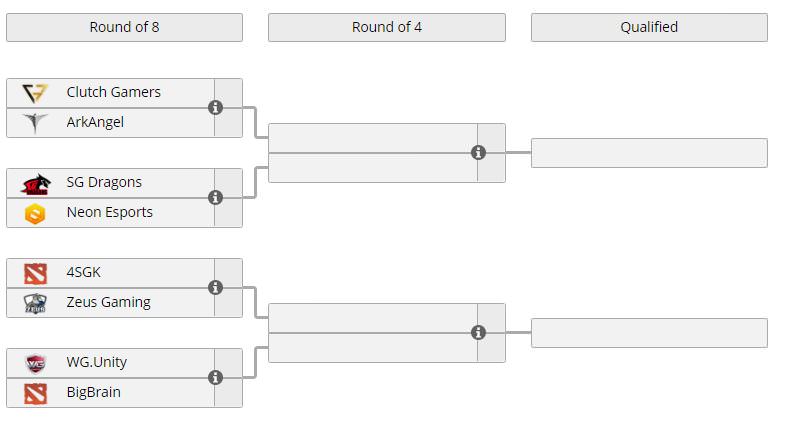