The quarterfinals came to an end in Montpellier today as the ESL Pro League Season 9 - Finals advances towards the semifinals with Liquid and G2 Esports making their way through to face off against Mousesports and NRG respectively.

The highly anticipated match-up between the top two teams in the world Liquid and Astralis was the most intense three-match series witnessed yet in the tournament. The stakes were really high in this one, many predicted this to be the Finale but the two met each other on the opening day of the playoffs. 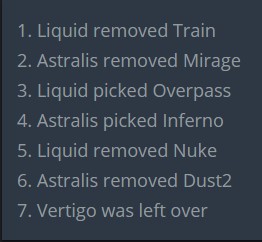 The map picks were as expected with both the teams getting their hands on their strongest maps. With the decider being left on to the newcomer, Vertigo.

In a turn of events, neither team was able to claim victory on their own map picks but even in this situation the real pressure was on Liquid, as they were the one to lose on Overpass first. It was a do-or-die situation for the boys in blue as they stepped on Inferno, a map on which Astralis has a really good hold. 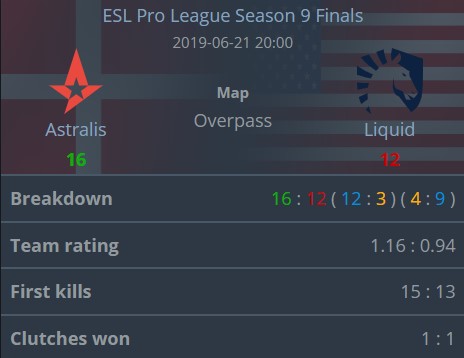 Starting out on Overpass, Astralis played a solid CT-side and though Liquid fought back well they just did not have enough to work with leading to an early disadvantage. But the real shocker was still to come as Liquid went on to give their best performance ever on Inferno’s CT-side.

They secured fourteen rounds by the halftime mark and despite a solid start by Astralis in the latter half chipped away the remaining two to play out the decider on Vertigo.

Vertigo was a close one with both the teams showing exceptional skill on their respective T-sided performances but it was Liquid’s day today as they won the decider and sealed the match, dismissing all that the haters had held against them.

They had faced Astralis as the number one team for the first time and proved that they were worthy enough to dethrone them.

You're a fucking god @EliGE

EliGE has more kills than the rest of Liquid combined

In the other quarterfinal, FaZe ran low on fuel as G2 outplayed them bad. What many believed to be an uphill journey all the way for G2 turned out to be a stroll in the park. A win on their own map Train bolstered their confidence going into the enemies territory on Dust 2 and boy what a treat it was to watch them outclass FaZe.

After gaining an advantage playing CT, G2 had made their victory quite achievable. The second half went in their favour as FaZe failed to hold on to the sites. The French squad will be mighty happy with their performance tonight and can cause serious troubles for NRG as well.

"I'm very proud of them. Everything was on point, the team was perfect" - @G2kennyS

Let’s see how the teams fair in the semis tomorrow. Does Liquid go all the way through the Finals? Do we see a real upset and witness G2 fight it out in the finals? We will find out in a few hours.