The second last day of the ESL Pro League Season 9 -Finals came to an end with G2 Esports & Team Liquid making their way through to the finals. The two teams will be meeting each other in the finale of yet another tournament after playing earlier this week in the GG.Bet Cologne Invitational.

Imagine playing 2 Grand Finals in the same week vs the same team.. from the same location..

That is a possiblity if G2 and Liquid meet in the final.

This went down on Monday for the final ESL One Cologne spot. #ESLProLeague pic.twitter.com/lj29UzqYtu

It was not easy for G2 who had to go up against NRG. The match turned into an all-out brawl and G2 did well to make it through to the finals. On the other hand, Liquid was pushed to their very limits to make it through without going down to the decider.

G2 Up For A Revenge 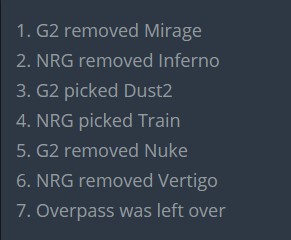 G2 and NRG started off by picking wins on their respective map picks, Dust 2 and Train. G2 edged out NRG playing T-sided on Dust 2 and then broke the opposition's momentum in the second half to run off with a victory.

NRG returned the favour on Train by taking a healthy lead in the first half after multiple successful executes. Their teamwork and expertise on the map was too superior for G2 who continued to struggle on the map even in the latter half.

With the score tied the two team played the decider on Overpass where G2 ran hot playing CT-sided in the first half, it is one thing winning the half but G2 just ran over NRG taking a massive lead and though NRG hit them back in the second half, G2 was able to sneak in a round every now and then to chip away a victory for themselves and move on to the finale.

KennyS was in a phenomenal form today as he hit an overall rating of 1.42, single-handedly taking care of the team on multiple occasions. He was lethal on Dust 2 and top fragged for the side on the losing map as well. Amanek was able to outdo him on overpass but kennyS was right behind him to ensure their victory.

He also became the player with the most number of kills in recorded counter-strike history, overtaking players like f0rest, GeT_RiGhT, JW, etc. 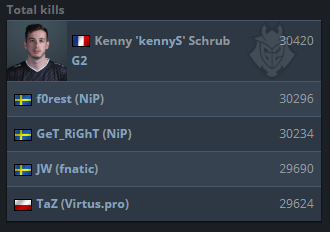 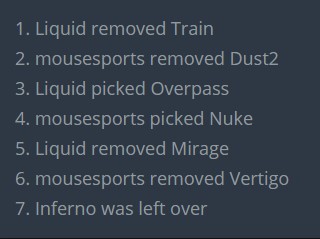 Liquid was a lot to handle for Mousesports and wiped them quite easily on their map pick Overpass. They gave them a treat of their formidable T-side on Overpass and then went on to secure the map by claiming the latter half as well.

Mouz was not going to give up this easy and were determined to equalise the score by claiming victory on Nuke but tables turned on them after Liquid went on to take a map winning lead playing as CT in the first half. Low on morale but not broken yet, mouz slowly crawled back into the game and took it onto overtime. 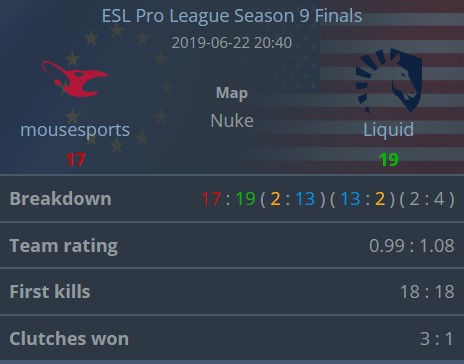 It was a celebration but one that was short lived as Liquid were finally able to put a stop to their seige and went on to win the map, qualifying for the finals.

Elige was in the spotlight once again, leading the team on Overpass while having a huge impact on Nuke as well. He held an overall rating of 1.27 finishing just behind Twistzz, who himself was quite the heavy lifter today.

The two winners will be facing off in the Finale tomorrow, while Liquid will be looking forward to claiming victory in another major tournament and secure their third victory in the Intel Grand Slam Season-2, G2 just want to avenge their earlier defeat at the GG.Bet Cologne Invitational and win this event.

Who do you think will be walking away as the champions?