Kuku vs China Saga - The Fallout

With Valve finally concluding the Kuku vs China issue, earlier yesterday, we can finally expect to see the Dota 2 Pro circuit return back to normalcy. The issue drew an unprecedented amount of attention from all across the globe and to some extent, has split up the Chinese Dota 2 scene and the rest into two separate entities.

Plenty of downright racist remarks were posted in public forums yesterday, as Valve’s crackdown was largely perceived to be a controversial move with many fans deliberating that the statement was inconsistent and unfair.

However, the TNC management has accepted the penalties that Valve has imposed and has since announced that they will be assigning a new team manager to replace the one responsible for misleading fans.

First of all, we are sincerely apologizing to the whole Dota community for the troubles this issue has caused. We are respecting Valve’s decision regarding the matter.


The penalties/fines imposed by the organization (TNC) to Kuku and Paulo (Manager) will still apply. A new team manager will be assigned to the team.

This has been a learning experience for us and we will continue to work harder to be a better organization.


Carlo "Kuku" Palad, on the other hand, made a few unsavoury comments on his Twitter ID before deleting it, perhaps fearing further repercussions. 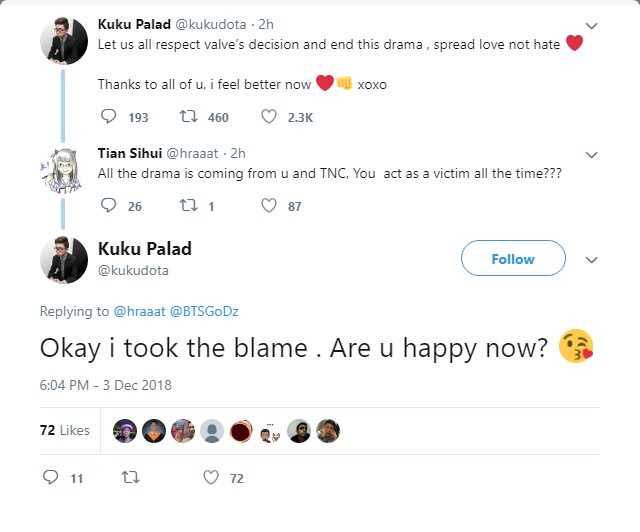 Kuku, will however still stream the Chongqing Major and donate the revenue towards Chinese NGOs.

With several racist remarks flying around in the Dota 2 community, with some demanding the ban of  Bai "rOtK" Fan who made an unsavoury comment about the Filipino diving team in 2016 amongst many other accusations, popular community figure Wykrhm Reddy made a post trying to explain the delicate situation that the community has been thrust into, and tried to calm the storm.

One thing is clear, a huge precedent has been set by Valve after this incident - teams are responsible for their players' actions and that there will be severe repercussions if they’re mismanaged.

However, it is quite evident that the lack of communication between Valve, TNC, Starladder, and IMBATV is the root cause of this issue. Perhaps it is time for Valve to hire a community manager? Or an esports commissioner like the Overwatch League? For it is clear that someone needs to bridge the gap between Valve, the teams, the players and the fans.
About UsContact UsServicesRSS
DisclaimerAdvertise With UsArchiveEditorial Team