Kuku apologizes on Weibo, but gets called out for misleading fans

After reports of a Chinese team refusing to scrim against an SEA team, TNC Predator’s offlaner Carlo "Kuku" Palad apologised on his personal Facebook account.

Later, Kuku registered a Weibo account to apologize to Chinese fans and purported that the Tiny, against whom he made the “Ching Chong” comment was named as “Ching Chong” in an attempt to exonerate himself. 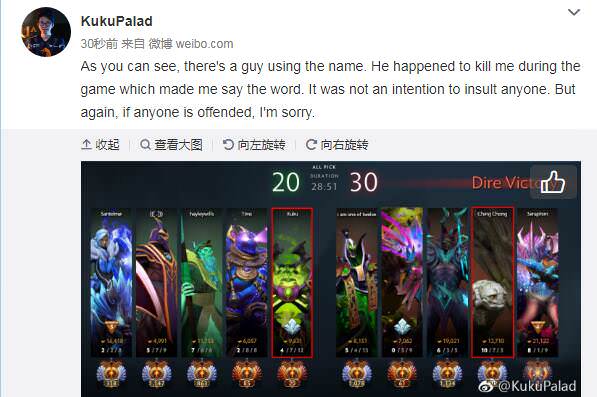 The Tiny player's name, in the match where Kuku used those inappropriate comments, is now “Ching Chong” indeed. However, Steam Logs show that the Tiny only changed his name from "Losing Streak" to "Ching Chong" after the situation made its way to Reddit.

When Chinese fans pointed this out to Kuku, Kuku deleted his Weibo account.

At the time of writing this, the TNC organization is yet to make a statement regarding this issue.