The league stage of the Kings Cup 2 SEA came to an end with 3 teams moving forward into the playoffs. Earlier it had been announced that only 2 teams would qualify but after TNC dropped out, the number was increased to 3. The 3 teams will join Fnatic who are already in the playoffs as they fight for a spot at the Summit 10.

Lotac were the top placed team in the round robin system with wins against Execration, DeTonaTor, EVOS and Tigers. They were also the only team who didn’t lose any of their matches, drawing even in the other 3. The European and SEA mixed team of Clutch Gamers also got off to a good start in what seems to be their first test in SEA as they took second place with 4 wins, 2 draws and a loss.

The other team which managed to have success in the Kings Cup were DeTonaTor who recently added Sam_H to their roster. The Filippino squad looked solid with 3 wins, 3 draws and a loss and will now play in the next phase of the competition. 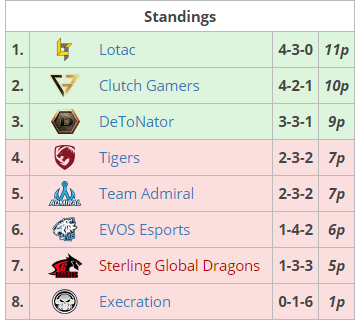 Both Tigers and Admiral will be disappointed with the round robin results as they were the more favoured teams to go through. Admiral’s recent performances have been positive but the team looked super shaky in the Kings Cup online matches. As for Execration, the team that played at TI once, now look like a shadow of their former selves and with 6 losses in the league, they took a woeful last-place finish.

Fnatic will now face DeTonaTor while Lotac go up against Clutch Gamers in the double-elimination playoff brackets.