JDL Season 13 - The Playoffs are set

The final game of the group stages in The JDL Season 13 is over, and the brackets of the playoffs have been decided. 4 teams have been relegated, Entity Gaming, TNC Tigers, Young Minds, and Veterans while 2 teams have been eliminated from the playoffs Signify and EVOS Esports but 4 still remain to battle for a prize pool of $4,000.

Team Highground, Clutch Gamers, Execration and Rex Regum Qeon will battle it out over the next few days for their shot at JDL’s $4000 prizepool. 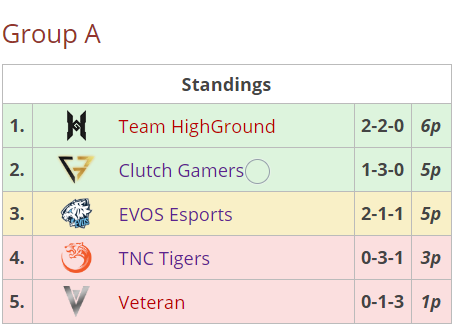 One of the most surprising results in Group A is TNC Tiger’s 4th place finish. The team who were 1 win away from making it to TI were relegated to a lower league thanks to their disappointing run where they drew 3 series and forfeited 1 finishing with just 3 points.

It was Team Highground who were the best performing team in this group as their unique picks, and crisp execution saw them finish in 1st place with 2 wins, 2 draws and 0 losses. The 2nd playoff berth was a lot closer with both Clutch Gamers and EVOS Esports finishing the season on 5 points, forcing them to play a tiebreaker to decide who moves on to the playoffs.

The tiebreakers were not as close as we expected them to be, with Clutch Gamers easily outdrafting, outplaying and outexecuting EVOS Esports to book their place in the playoffs. 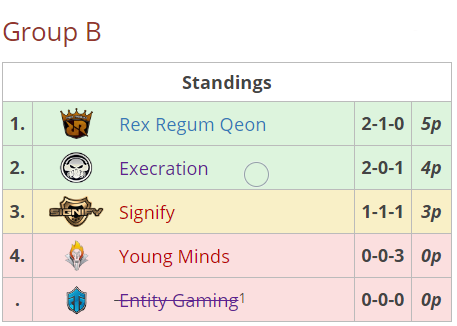 Entity Gaming’s withdrawal from JDL in the middle of the season made the group relatively easier for all the other teams involved.

Rex Regum Qeon turned up the heat in Group B with two clean sweep victories over Execration and Young Minds and a single 1-1 draw against Signify which catapulted them to a first-place finish in Group B.

Apart from the 1 loss to RRQ, Execration was also in good form. They managed to secure two relatively easy 2-0 victories over Young Minds and Signify to finish in 2nd place and move on to the Playoffs.

The bottom team in this group, Young Minds, had disappointing results to say the least. They failed to win a single series as they got 2-0d by Signify, RRQ, and Execration, relegating them from the 1st division.

Here’s a look at how the playoff brackets have shaped up at the end of the Group Stages: 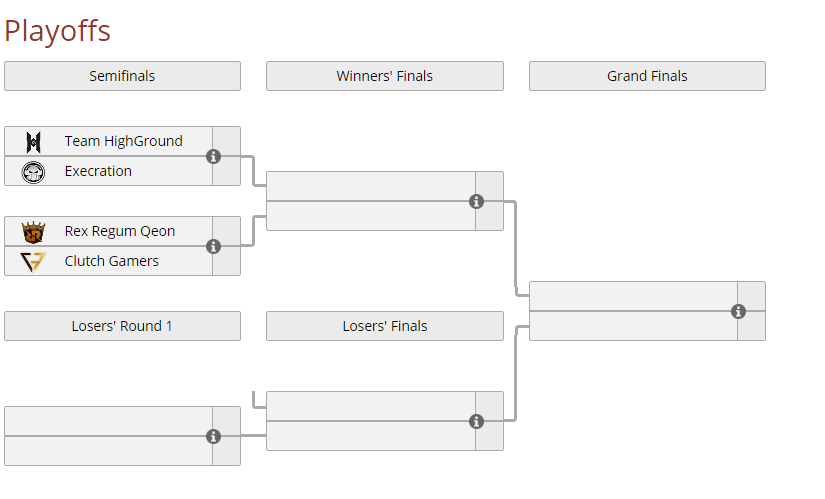 No official announcement about when the playoffs bracket will kick off has been made by the JDL staff. But we expect it to take place before The International 8 kicks off.