Today marks the start of Iesf World Championship 2018 where 26 teams representing different countries are going up against each other in the city of Kaohsiung, Taiwan at the Kaohsiung Arena.

The 26 teams have been divided into 8 groups with every group facing tough competition to make it past the group stage and onto the Playoffs that are scheduled to start from tomorrow 10th November. Every group will witness the top two teams moving ahead to the playoffs.

Turning our attention towards Group – C. Team Invictus, the Indian representatives have already played their first match against TNC and are waiting for their second match to take place against Team Virus from Lebanon.

This is where the teams in Group – C stand currently: 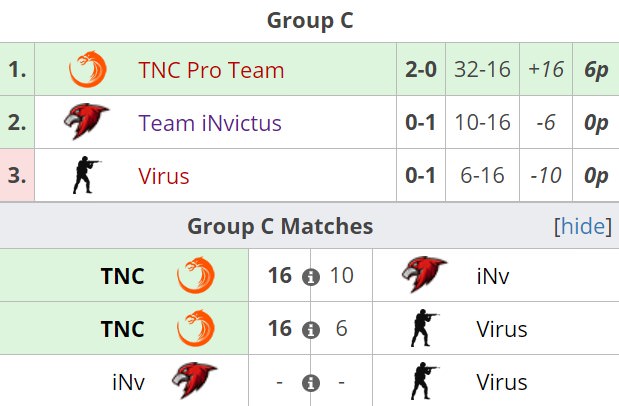 The first game of the Group was played between TNC and Invictus on Train. Both the teams were on equal footing for the first few rounds after which TNC shifted gears and picked up the pace to build quite a momentum, Invictus played well but were not able to shut TNC down only managing to steal a round every now and then which lead to a deficit of 5 rounds at halftime.

The second half observed a more disciplined Invictus who were adjusting well to the situation and tried hard to recover but TNC retaliated evenly and took the game away from the Indian squad with a score of ‘16-10’.

Following this game, TNC went on to beat Virus on Overpass with a score of ‘16-6'.

TNC finished their group stage run as predicted, by winning both their match-ups and finishing comfortably at the top of the points table.

Team Invictus did bring out a great fight towards the later stage of the game against TNC. If they continue that form with the same gusto and confidence, it will surely result in a much better performance. Of course, the last minute departure of Tejas 'Ace' Sawant from the Invictus line-up due to health issues might be a huge blow for the Indian contingent, but they seem to be able to hold their own pretty comfortably once they get into the flow of the game.

It is still not over yet for Team Invictus as they play the Decider Match against Team Virus at 17:30 (IST) today evening. The winning team will be placed second on the points table while also qualifying for the Playoffs.

So, come show your support and cheer for your favorite team towards a decisive victory. The match can be streamed live at: