Another qualifier for the PLG Grand Slam 2018 tournament reached its conclusion yesterday with INTZ eSports moving on to the Main Event, representing the North American Region.

The qualifier witnessed 37 teams participating in the Open Qualifier which was hosted online on FACEIT.

The qualifier followed a BO1, single elimination format right down to the quarterfinals after which the remaining four teams underwent a BO3 series for the semifinals and finals.

This is how the qualifier went down, 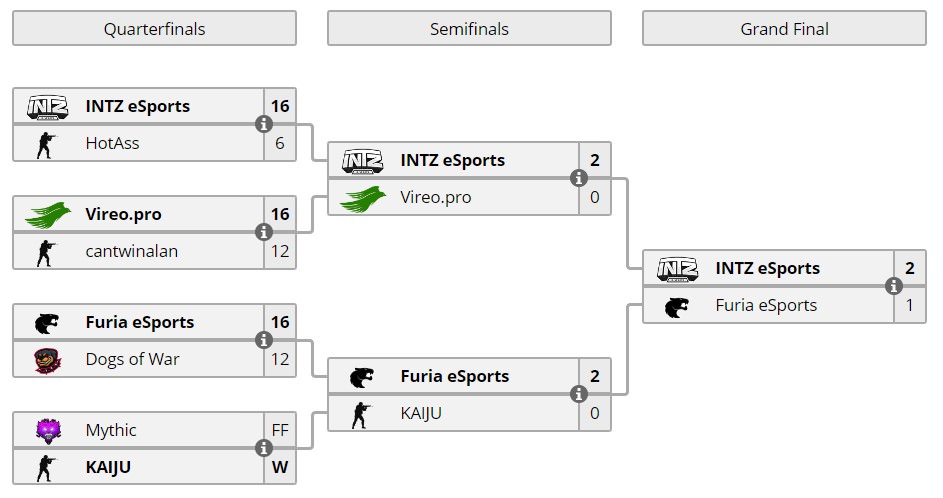 Journey To The Finals

INTZ reached the finals backed by a solid performance against HotAss in the quarterfinals followed by a '2-0' wipeout of Vireo on Cache and Mirage with scores of '16-11' & '16-5'.

Furia who were the favourites coming into the Qualifier did stand up to everyone's expectations, beating DoW by a score of '16-12' on Overpass. Moving on to the semifinals Furia went up against Kaiju. The game turned out to be a single sided affair due to the sheer difference in skill and experience in-between the two sides. Furia bested their opponents on Inferno and Nuke with a score of '16-6' & '16-1' to book their slot into the finals.

The finals took place between INTZ and Furia where Furia started off strong by winning on Mirage with a score of ‘16-10’ but INTZ stepped up to equalize the series with a win on Overpass. The decider was played on Cache where INTZ stomped over Furia who were unable to cope up with the pressure and were constantly making mistakes that led to them losing out on the match along with the series.

INTZ eSports won over Furia eSports with a series score of ‘2-1’ and move on to the Main Event of PLG Grand Slam through the North America Qualifier.