Hello everyone! Welcome to another episode of ‘MewMents with Catslayer’.

While attending the recently concluded ESL One Mumbai 2019, I got an opportunity to converse with a few gentlemen from Intel Corporation, the key sponsor for the event.

We started on a good note, hitting it off instantly as we began a curious discussion on the zoom microphone I held. Clearly fascinated by its intricate design we took our seats to talk about Intel’s future in the world of esports. We went on to discuss Intel’s involvement in Indian esports, what drives Intel to promote esports in a particular region and much more. So read on and enjoy.

Q - What are Intel’s thoughts on the future of esports?

As a matter of fact, the real battle in esports is a battle for other types of media like; Do people watch movies or do they enjoy these streaming events? Because some of these events have almost 200 million unique viewers at a given point of time for a final event.

You gotta imagine, some of the sports team must be looking at that and thinking “My God! What’s going on here?!”.

So, when I think about the future of esports globally, it's just becoming the new form of entertainment and everybody wants to be entertained!

Everybody plays a card game, gaming is just fundamental to the human condition. So that’s why I don’t think there is going to be really any slowing whatsoever with esports, it is what we are.

Q - I think everybody considers India and China as upcoming markets for esports. There is a lot of untapped potential in these regions. What are Intel’s future plans regarding Indian esports?

So, I think the first thing we are going to test is how well does ESL One do here. Based on the result, if they are pretty good, that will sort of give us an indication about how we want to go ahead here and what sort of investment will be required. So, I can’t really comment about the future of esports for India from Intel and ESL specifically, but I will say this market looks very similar to what we did in Australia three years ago with IEM. And if the early views are any indication then I feel that there is a strong potential for us to continue esports related events here.

Lee Machen - (continuing on the topic with a focus on China)

I would love for us to work together to help India become what China has become with esports.

In China we run an IEM, we also run an independent series of events called Intel Master Challenger, which are more of an amateur event, but they are still very large events. The viewership that we get for the events that we run in China, as well as the events that companies like Riot, run in China in Overwatch, and the amount of viewership that results from that, is just staggering.

And I have no reason to think that India doesn't have that same sort of potential if the growth that started in the past couple of years continues.

Q - You mentioned Sydney. I noticed that IEM has been venturing back to Australia since the last three years in succession, to host the event in Sydney. I have never observed IEM go back to the same location three times in a row, so what is it that brings Intel back to Sydney time and again.

I think Australia is a good location and its well situated in the region. It’s been showing pretty good gaming growth and that's what makes it easier for us to keep coming back again because there is a pull for gaming in the area.

Just a slight correction, we consider IEM in the US to be just in the US and we have done IEM in the US 4 times now. We did San Jose, then Oakland twice and then Chicago and it is very likely we will be back in Chicago, in the US this year.

Also, we have been in Poland for 7 years now, definitely longer than we have been in Sydney. Sydney was an addition to make sure we had an event on this side of the world.

We have also actually been doing IEM in China for a while it's just been inside of a gaming convention there called China Joy. So, it’s been in China, it hasn’t been of the same size of what we do in Poland or the US or in Sydney, but I hope that we are able to continue to have that grow as well.

We put the IEM’s in four different parts of the world and try to make them regional events and what we found is that when you come back to the same place a few years in a row the crowd really starts to expect it and it becomes something that they reserve on their calendar and the interest, the viewership, and the live attendee base grows every year.

Q - Talking a bit about sponsorships. Intel has sponsored a lot of ESL and IEM events over the years but CS is a game that has some terms that are not in good taste like Terrorist and CT, they also showcase maps like Nuke or a hijacked train station because of which there are many companies that give this game a big ‘NO’ when it comes to sponsoring teams or events. Has this ever been a hindrance for Intel?

In my experience, it has not been a hindrance at all. In fact, if you go to any of the events where we play counterstrike the sponsorship involvement has grown incredibly over the past couple of years to the point where we have companies wanting to be involved who had very little to do with gaming, so companies that make drinks or razors or anything that the young audience would want even if it has nothing to do with gaming we have had to figure out at our events how to make room for more sponsors it hasn’t been any kind of a hindrance at all that it’s a violent game.

Q - This has been your first venture in India sponsoring an event of this size and this is a dota event, but India as a whole is known to be more inclined towards CS. So does Intel have any plans on any future CS:GO events in India?

So, we can't talk about future options here, but nothing is off the table, I have heard that commentary before if we had done CounterStrike then somebody would have said Hakimo is my favourite game. The other thing they also do is that these partnerships also take decision making between the content provider, ESL, and Intel. We found it easier to bring Dota here, it doesn't mean other things are out it just means this was our first start.

It can also depend on the availability of the teams, CS has its own worldwide calendar of events where other top teams are trying to figure out where they can be, same thing with Dota so to be honest I think ESL was the one that figured that Dota was going to be what we are going to play at this event but I know there's a lot that goes into those decisions. 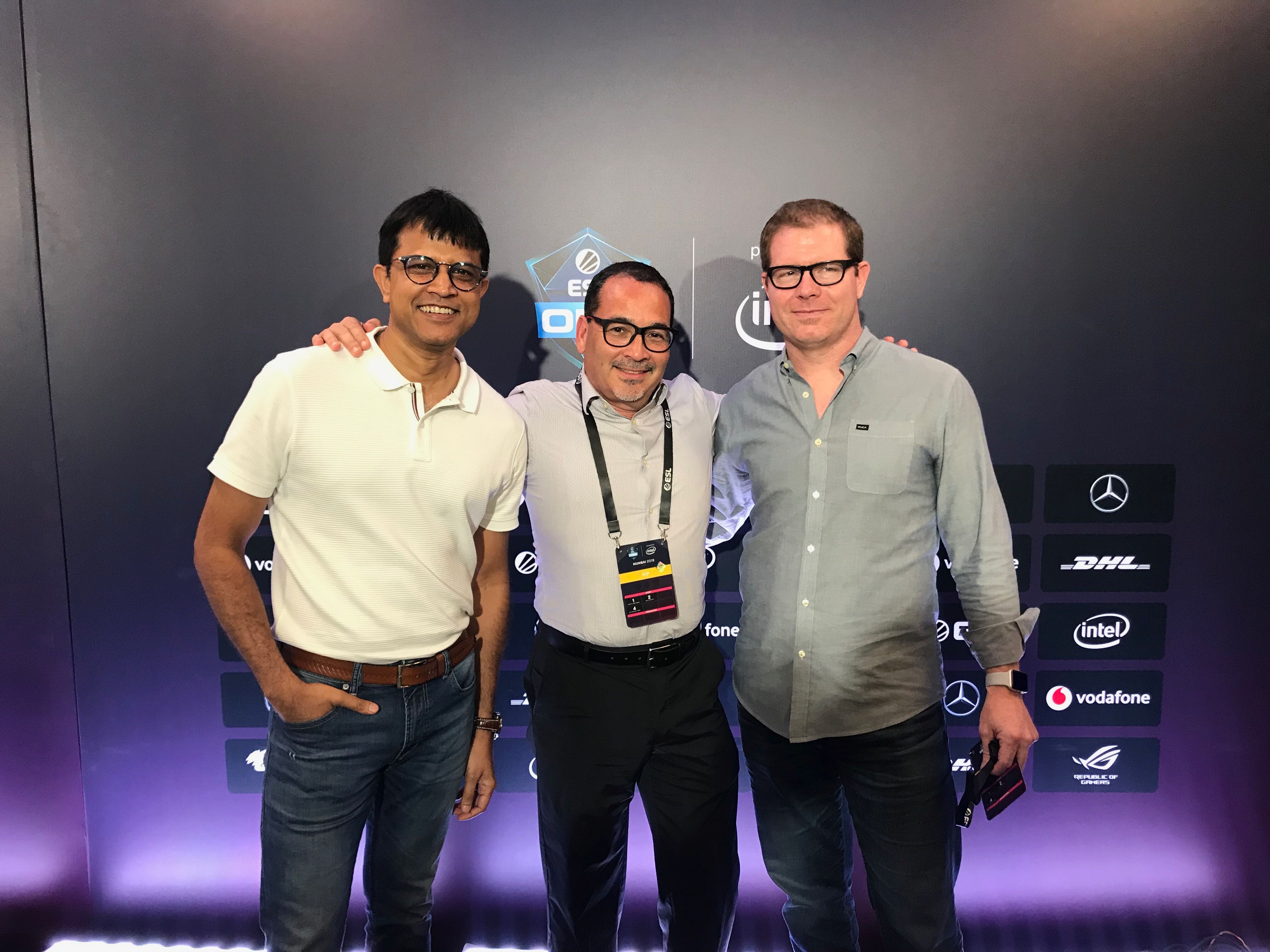 Thank you for your time and for sharing what Intel thinks and does for esports. It was a pleasure catching up with all of you. Had a wonderful time talking about the business aspect of esports, something I had limited knowledge of.

That was my time with the Intel representatives at the ESL One Mumbai. Hope to see you guys back in India with more such events, sooner rather than later!

Check out the previous editions of 'MewMents with Catslayer' below.