The first ever international CS:GO event for Belgium, Charleroi Esport is well on its way to the Main Event as it's Regional Qualifiers come to an end with B.O.O.T-d[S] qualifying through the last remaining Asian Qualifier.

The event which is scheduled to take place from 12th-14th April will witness a total of 8 teams participating in it. Out of the 8 participating teams, four have been directly invited while three make their way through the qualifiers.

The last remaining team was supposed to qualify through the North American Qualifier but due to lack of participants the qualifier was cancelled and it was instead decided that the last slot will be occupied by another Direct Invite.

The Asian Qualifier witnessed a total of 60 participants out of which only 1 team qualified onto the Main Event.

Amongst the 60 participants were three Indian teams Entity Gaming, Signify CS:GO and Global Esports, unfortunately, none of them were able to reach even the Quarterfinals losing out to FrostFire, TNC Pro Team and DHftw, respectively.

The final showdown was a one-sided affair with B.O.OT-d[S] taking down FrostFire on both Mirage and Inferno to qualify for the Main Event.

Charleroi Esport has also announced its partnership with Scoup Esport, who are an Esport event management company that specializes in renting and selling of computer equipment.

Scoup Esport will be providing all the computers, monitors and gaming chairs both on the Main Stage as well as in the Training Rooms for the event. 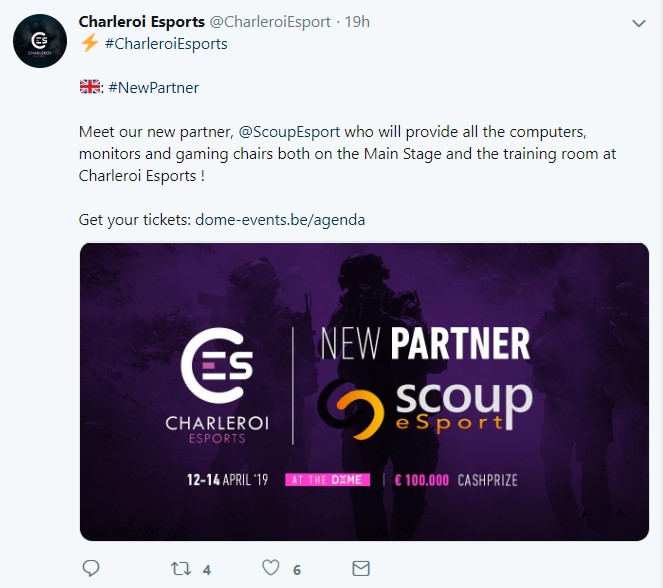 The following teams have been confirmed for the event till now: