6o, Feb, 2017
A big part of Dota’s uniqueness and rewarding gameplay is the system of patches and versions which keep getting updated from time to time. Over the years we have seen, played, loved and hated the numerous patches that have been released, with the last one, 7.00 proving to be a major curveball. I hear a lot of my fellow Dota players complain when a patch comes out saying ‘Oh! They destroyed the game’ and ‘Oh! It’s not even Dota anymore’ but I am firm believer of the quote ‘All change is good change’. This applies to all things in life as well, but we’ll leave the philosophy for another time.

I myself started playing Dota back in the WC3 days and have seen the game evolve and grow to it’s current version. Not going to go too in depth but I vaguely remember a time when Roshan didn’t exist on the map and Aegis could be bought with 3 charges. I also remember Slark getting added to the hero pool and Razor having a skill called Frenzy but I guess most people won’t remember these things. The point is, the gameplay has changed over the course of many years and many patches and many of us have been witness to this. So instead of complaining about the changes, embrace them. Because before you know it, Icefrog will lead us into another blind turn and all you’ll be left with is memories of a bygone era.

In all honesty, the evolution nowadays is a lot more influenced by the competitive scene which was not as mainstream in the earlier days. Back in WC3 days, the concept of a broken hero/broken build wasn’t as prevalent simply because people didn’t consume so much content and were more than happy to pick whatever came to their minds and try and win. Sure there were guides and stuff on playdota, but there was no RTZ stream to watch or a Miracle autowin build to follow so most of us were simply spitballing most of the time. But as the times changed, so did the approach and mentality, and we pretty much have a more or less standard way of playing the game nowadays.
But enough of my ranting, let’s get down to business. Here we take a look at the last few big patches and walk down memory lane as we visit the heroes, the builds and the metagame that we played out in the last year or so. Be it cancer, be it stale, be it broken, these were the meta’s that we all remember playing. 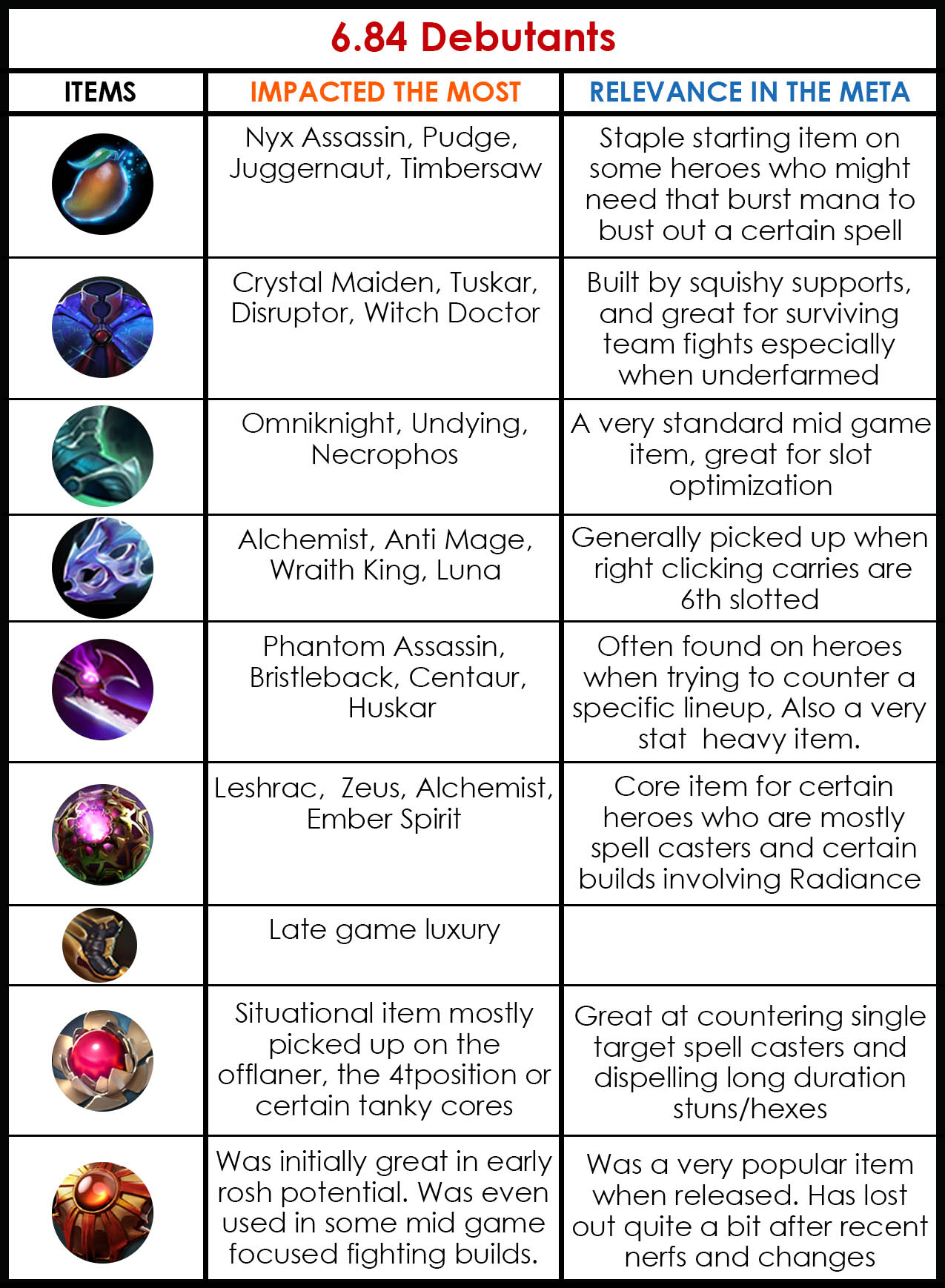 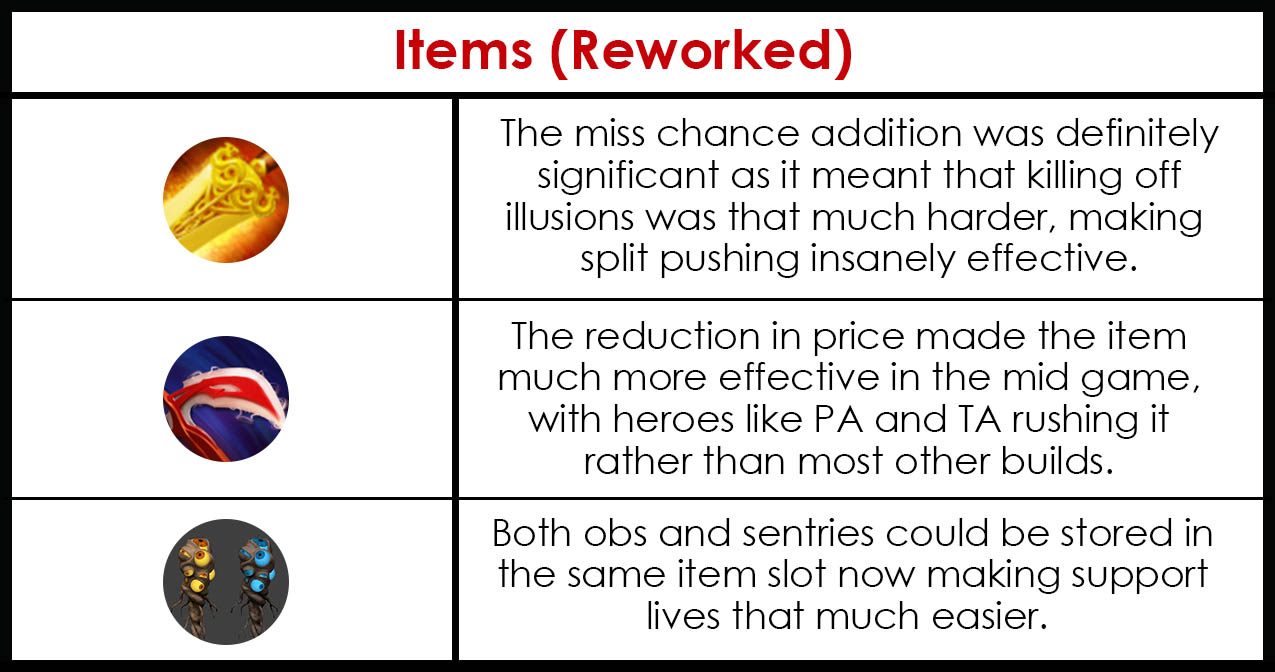 TI5 was fought out on this patch as well. All in all a pretty great patch, with magic damage forming the crux of most lineup’s cores. Personally I enjoyed spamming Leshrac quite a bit as well. (Sorry. Not really though)

6.85 came as a welcome relief after TI4 and while shortlived, this patch provided a respite from the 6.84 meta. Leshrac, Gyrocopter and QOP were hit by significant nerfs and deservedly so while Alch’s low pick rate in competitive games warranted another buff (4x bounty rune to 5x). Techies too received a much needed nerf, much to the relief of many and Undying’s Aghs upgrade as changed to 10 Strength steal on Decay. Hook and Arrow also became tougher to land with siege creeps changing from magic immunity to 80% magic resistance. The patch barely lasted 3 months hence it isn’t that significant or relevant except for the fact that the Frankfurt Major was played on it.

The first major patch since TI5, 6.86 brought about a host of new changes that completely revamped the game and became the backbone of 2016 Dota.
? 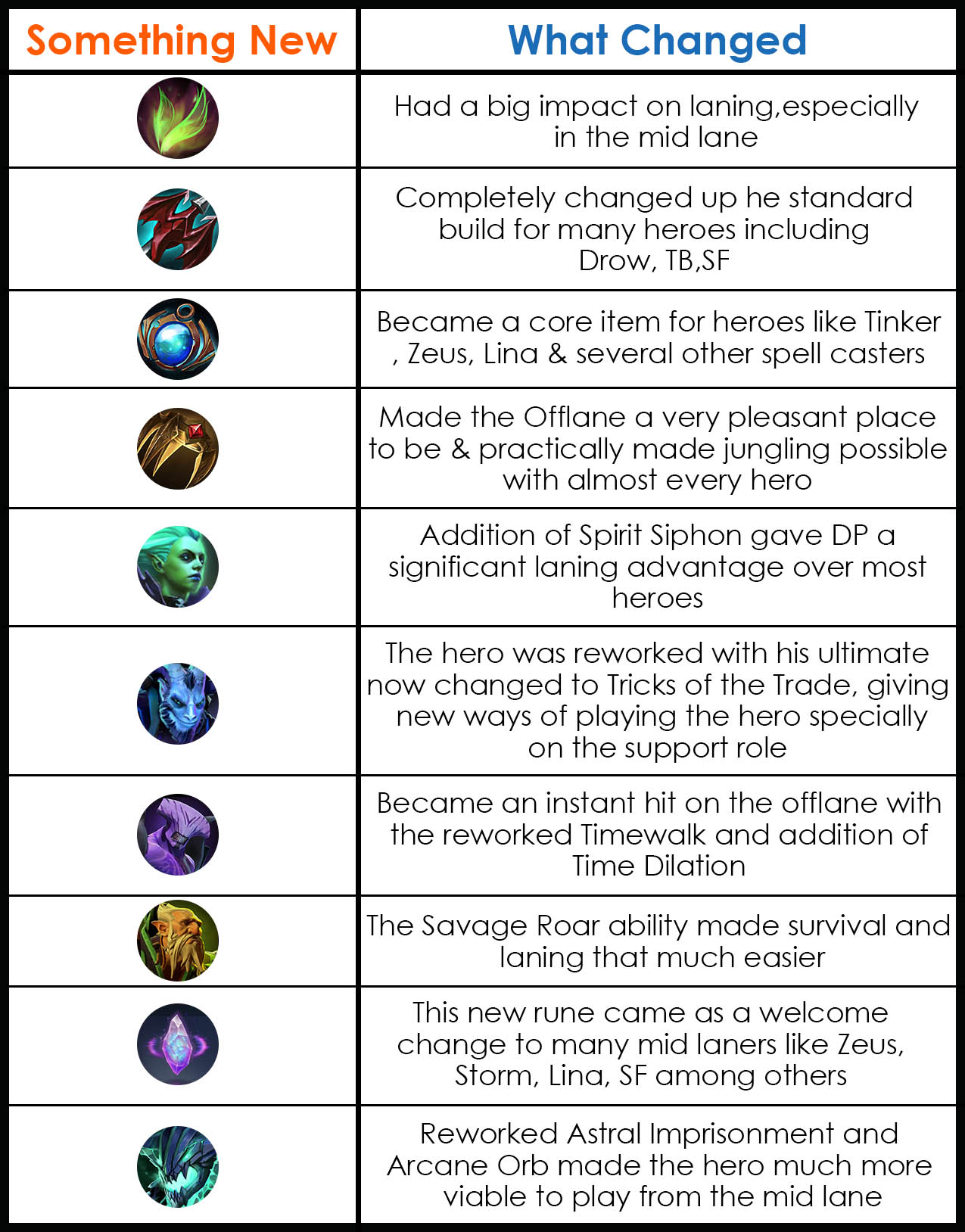 Most notably, the Shanghai Major was fought on on 6.86 with Secret picking up the trophy on the back of picks like Windrunner, Invoker and Nature’s Prophet.

I honestly expected 6.87 to be more of an inbetween and a stabilizing patch considering that it had been only 4 months since 6.86 but what Icefrog delivered hit me like a doozy. New items had been pouring into the game for a while and 6.87 was no different.  But undoubtedly the best feature introduced was the addition of the ban feature in Ranked All Pick. 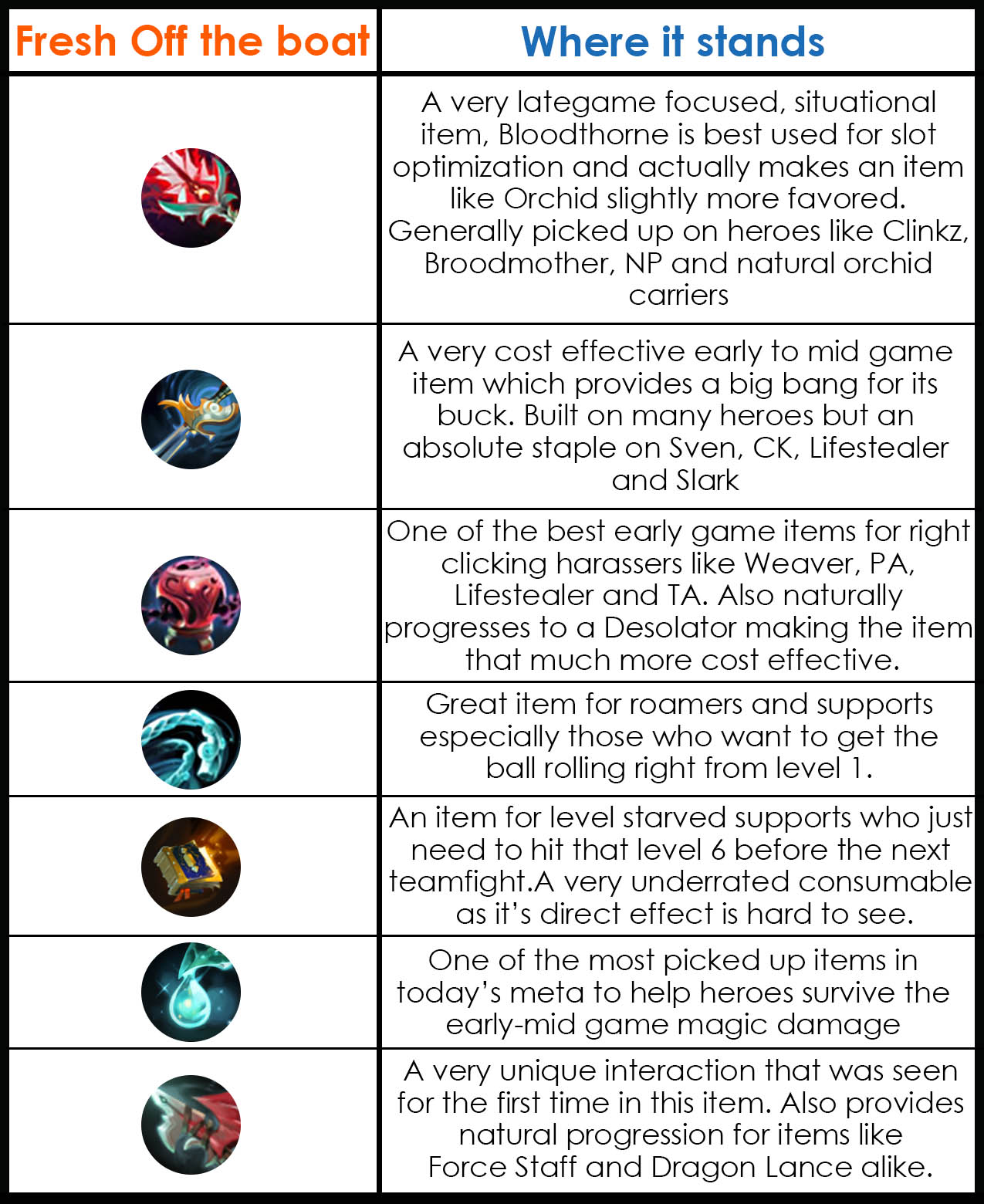 The Manila Major was fought out on 6.87 where OG took the win with popular picks being the DP, Alchemist, Sven, Mirana, Slardar, Beastmaster, Void and Disruptor.

This was the last patch to come out before TI6 and it would be unfair to label it as anything more than a balance update. In more ways than one, 6.88 was an extension of 6.87 and it had numerous sub patches to speak of. But it was the patch that we saw in action at TI6 and the entire meta leading to the tournament had made most heroes viable in the competitive scene, at least in certain cases. Only 5 of the available heroes remained neither picked nor banned (Lina, Leshrac, Bloodseeker, Treant and Visage). Mirana, Batrider, Timbersaw, SD, Ogre, Elder Titan and Void remained as popular as ever. But let’s not forget that a significant amount of bans were used for keeping out other strong heroes like Io, Drow, Alchemist.

6.88 was tweaked and played with all the way till after the Boston Majors until Patch 7.00 came out in mid December 2016 but the crux of it more or less remained the same. Heroes like SF, Warlock, Luna, Legion Commander all started gaining popularity towards the end of the patch but come 7.00 the entire meta was revamped. 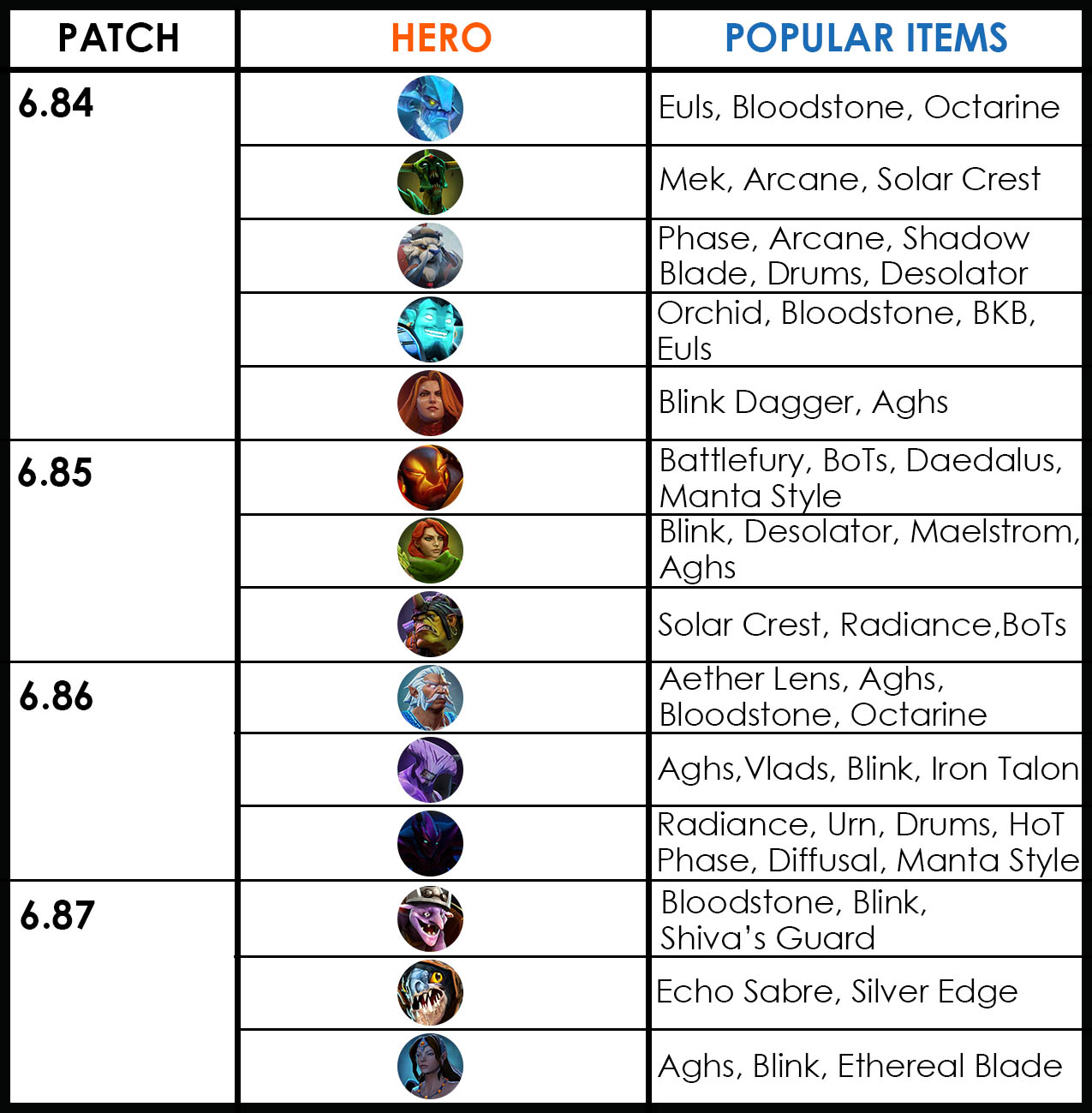 Invoker has been in the meta for quite a while now and shows no signs of leaving. Be it the QW Orchid Urn build or the straight up QE Midas Euls build we have seen Invoker haunt pubs for a long long time now. Spectre was really popular during the ‘Badman’ phase where his new style of playing made him a very difficult to deal with. Ember’s meta shift is remarkable on the other hand, with his build having been completely switched up in patch 7.00 with the addition of the talent tree. Alchemist too was an extremely popular pick from 6.86 onwards with builds varying from time to time until it stabilized at the Radiance+BoTs+Manta Style build. Many heroes came and went like Zeus, Leshrac, Undying, Enchantress, Lina and Tuskar among others. Some heroes were seen in different roles in different patches. For example, Tuskar started out as an offlaner but ended up being a 4 position. Earthshaker was seen in both offlane and support positions as was Slardar.

In conclusion I’d like the say it seems fairly obvious that the game has changed drastically from patch to patch in the recent times. It takes a while to get used to the new stuff, but once you do, it’s hard to imagine the game without it. So stop hatin, and start playin. The patch is still new and still fresh, so go on out there, patent some wonky builds, discover a new type of cancer (No. Not MK), Borrow some ideas from previous patches, make some up of your own because eventually one day we’ll be reminiscing about 7.00 the same way I do about the days when Navi was the team to beat.