Iceberg Esports accused by CS:GO Player of failing to pay its players

1st, Mar, 2018
Rising Canadian Esports organization Iceberg Esports is being accused of not properly paying the players by Tom “tconnors” Connor, one of their CS:GO players, in a Tweet. 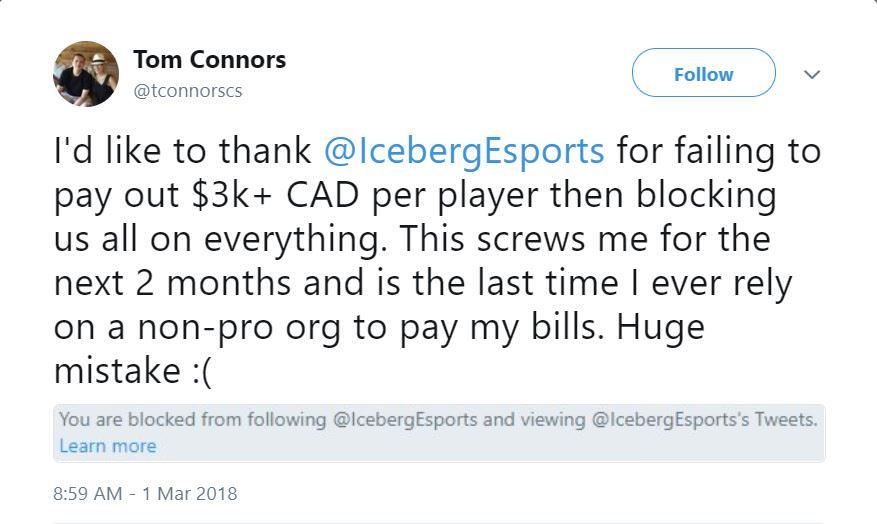 tconnors claims that Iceberg Esports has failed to pay each of its CS:GO players 3000+ CAD ($2300+) and has blocked them all on “everything”, attaching a screenshot along with the tweet.

The tweet has since accrued the attention of the CS:GO community with a front page appearance on /r/globaloffensive subreddit.


It should be noted that Iceberg Esports had also recently acquired ‘Animal Planet’, a Dota 2 team consisting of ritsu, bryle, MoonMeander, AUI_2000, and Kitrak.

It looks like the cat seems to have escaped the bag early, but we're proud to confirm and announce that we have officially signed team Animal Planet as our DotA 2 team. @Aui_2000 @MoonMeanderated @bryledota @kitrakdota @ritsudota @hellofronz pic.twitter.com/aDNQAW0PMR

AFK Gaming has reached out to Iceberg Esports for a statement and are awaiting a possible revert or a public announcement from their end regarding the matter.

Update 1: AUI_2000 confirms that the Dota 2 players have also left the Iceberg organization, implying that they too haven't received their salary either

We're no longer under contract with iceberg. Back to animal planet

Update 2: Iceberg Esports has made a ?public announcement from their end

A full statement will be released in the coming days. For now, we'd like to reiterate for everyone that during previous meetings with our players, Iceberg already confirmed that all salaries will be paid up to their respective end dates despite early terminations.