Have the tournament organizers been partial to Chinese teams?

Up until TI7, Valve has been in charge of deciding how to invite teams for the event. Every year, a select few teams would be invited to TI while the rest of the spots would be decided via qualifiers in each region. In the regional qualifiers as well, each region would have a mix of invited teams and open qualifier teams, again, as decided upon by Valve.

Here’s how the system worked in theory. The top teams would get invites directly to TI, a few would be invited directly to the Regional Qualifiers while everyone else would have to start off in the Open Quals. The process worked for the most part, simply because it isn’t that hard to decide on 6-8 teams who are better than the rest. However, with ever increasing amounts of money being injected into Dota prize pools, the need for a more transparent and fair system was called for with well defined parameters with which teams should be invited and which teams have to play regionals.

After TI7, Valve revealed plans for the Dota Pro Circuit, which consisted of Minors and Majors, events which would provide points to teams commensurate with their placing in tournaments. At the end of the season, the final standings would end up in determining which teams would get the chance to be directly invited for TI. Clearly the system was more transparent.

However with the new season came new problems. With 22 tournaments planned across a year, the sheer number of tournaments was hard for teams to deal with. It meant that even the top teams would have to pick and choose events because it simply isn’t possible to play at so many tournaments across the globe with such frequency. The second problem was of course scheduling of qualifiers. Multiple times throughout the season, teams have complained of qualifier disputes arising between organizers, the price for which was ultimately paid for by the teams.

And finally coming to the topic of discussion today, is the question - has the DPC been as fair as possible? Or are there more opportunities for certain teams/regions to earn DPC points?

Now this leads to a lot of questions being asked? Why should certain teams have more chances of getting DPC points over others? What criteria is being used to determine how many teams from a certain region get invited to a tournament?

From the TO’s perspective, inviting popular teams to ensure maximum engagement seems like a sound business strategy. This might not necessarily be fair for deserving teams with better performances but with a lower fan following. In this article we take a look at what we feel is an overrepresentation on Chinese teams at DPC events.

For the purpose of this analysis we have considered data from all the DPC events barring ESL One Birmingham and the Dota 2 SuperMajor, who were yet to announce the exact details of at the time of writing. 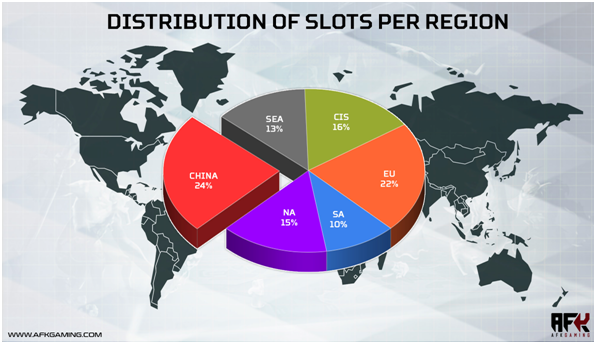 China has the maximum percentage of spots across all the events. Now, this can be attributed to many factors. As a region, it is quite large compared to the others with more teams competing at a higher level. In terms of viewership as well, China is reported to perform better than the other regions combined. Some of the events which were organized by the Chinese TOs, like PW Masters or MDL invited a majority of Chinese teams to their events. But let’s see how this worked out in the overall scheme of things. 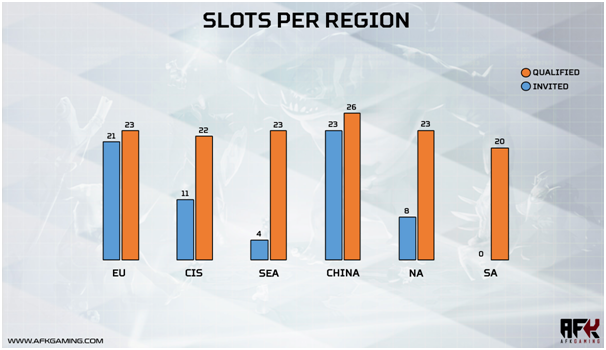 Here’s the distribution of DPC points acquired by each region as compared to the number of slots they received. 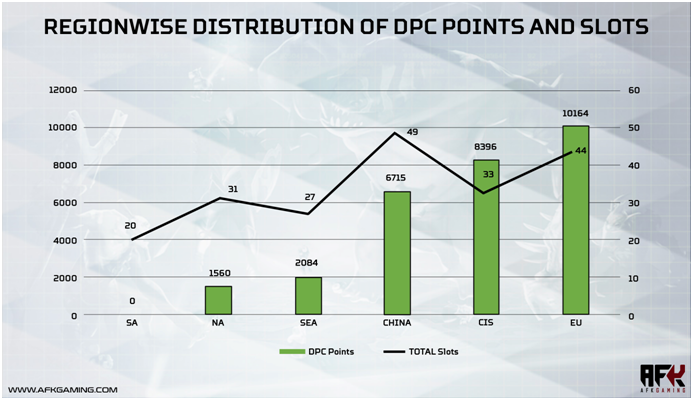 It’s fair to say that both EU and China have a better points to slots ratio than China. Despite an absurd 49 slots going to China across so many events, the top placing Chinese teams occupy only the 4th, 5th and 6th positions in the rankings table at the moment. Only one Chinese team has managed to win this season; Newbee with 2 wins in 14 events. No Chinese team has won a Major yet. 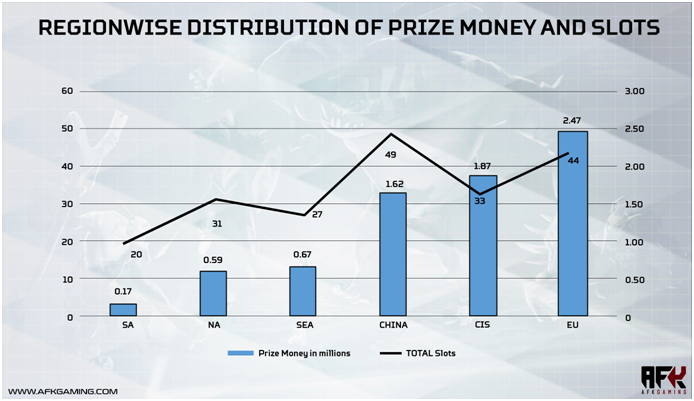 The Perfect World Masters invited 2 Chinese teams and had 2 qualifier spots as well just because the event was in China. Often, competitive regions like SEA and NA had just one spot dedicated to them despite the regions having multiple top teams who have in fact been able to challenge the Chinese teams. MDL Macau, for instance, had 2 Chinese invites and a Qualifier making it it so that 3 out of 8 teams at the event were from China.

It’s pretty clear at the moment, that Chinese teams have had more opportunities at DPC events, than other regions. But their performance at these events haven’t necessarily reflected their representation. With 5 events remaining and 2 of them being Majors which will be held in China, the numbers are only going to increase.

At the end of the day, since the DPC points directly translate to qualification for TI, other regions may well be underrepresented at Vancouver, at this rate. Is it time for Valve to step in and make changes for the next season? Should organizers be at their own discretion to be able to invite teams to their events, even when these events have a direct influence in qualifying for TI? And most importantly, has the system been fair to all regions?