Asia Minor Championship 2019 has reached the end of the second day of the playoffs and with it we witness the first team making its way through to the Major. Grayhound Gaming had to bring out their 'A-game' to barely cross the finish line as MVP PK fought through the lower bracket to reach the losers final. 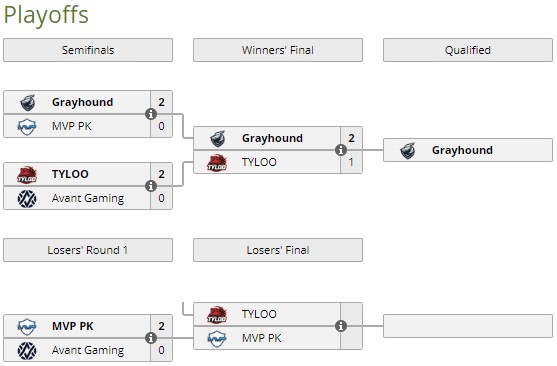 Hounds Off To The Major

The winners final was an all-out brawl between the best that Asia and Oceania have to offer. Grayhound Gaming had to dig in deep and play their level best in order to qualify for the Berlin Major.

Tyloo were as powerful as ever and fell short by just a bit. They are still very much alive as they still have a second chance to qualify for the major.

The three-game series went down to the wire as Grayhound claimed victory on Inferno which was picked up by the Chinese squad. It was a close affair but Grayhound claiming the map put Tyloo under tremendous pressure.

Following this, the two met on Dust 2, a map on which Grayhound is known to be quite dominant. But also being a classic pick for the Asian teams, Tyloo had a few surprises of their own, as they went on to claim the match ‘16-6’ in its favour and level the series.

The two met on Train for the decider and it was the most intense map of this tournament yet, both the teams were going ahead all cylinders blazing. Tyloo took a bit of a hit in the middle but came back strong, stringing four rounds in succession to take the game into overtime.

It was still pretty close for both sides but Grayhound in the second overtime was able to clutch a few rounds which lead to them running away with the game and lock the series in their favour, ‘2-1’.

MVP PK, on the other hand, kept themselves in contention for the second spot by taking down Avant Gaming ‘2-0’ pretty comfortably. Avant really could not step up their game against a hungry MVP who took charge and followed through to the losers final where they will now be facing off against Tyloo.

It has been an exciting day of Counter-Strike in Berlin with Grayhound proving that they have indeed grown a lot since Katowice back in January. With another killer losers’ final setup for tomorrow, let’s see if Tyloo can make it through in their second attempt or do MVP give them hell.