The much-awaited show match between FURIA Esports and AVANGAR played under EMF CS:GO World Invitational 2019, part of the ongoing e-Sports & Music Festival Hong Kong 2019 came to an end today with FURIA walking away as the winner of the five-match series and winning $500,000 HKD ($64,000 USD) in cash prize.

It was more than just an exhibition match for the Brazilian hotshots, FURIA, who was playing this match to settle an old score against AVANGAR. The CIS based team had defeated FURIA in the finals of DreamHack Open Rio earlier this year, bagging a cash prize of $50,000 USD while walking away as the champions in Rio De Janerio.

Since that encounter though, FURIA has really turned over a new leaf as they have raced ahead to stand 9th in the world rankings according to HLTV while AVANGAR has dropped quite a lot to stand at the 27th position.

This is how the match proceeded,

After taking an early hit on AVANGAR’s pick Inferno, the Brazilians hit back on Vertigo to level the series ‘1-1’. With the momentum on their side, FURIA went on to defeat AVANGAR on Mirage once again to win two games in a row and take the series lead ‘2-1’.

AVANGAR now under pressure was not able to come back into the series and take it down to a decider, as they faltered for a third time on Overpass, losing the five-match series ‘3-1’ and granting FURIA what they had eagerly sought since their last encounter. 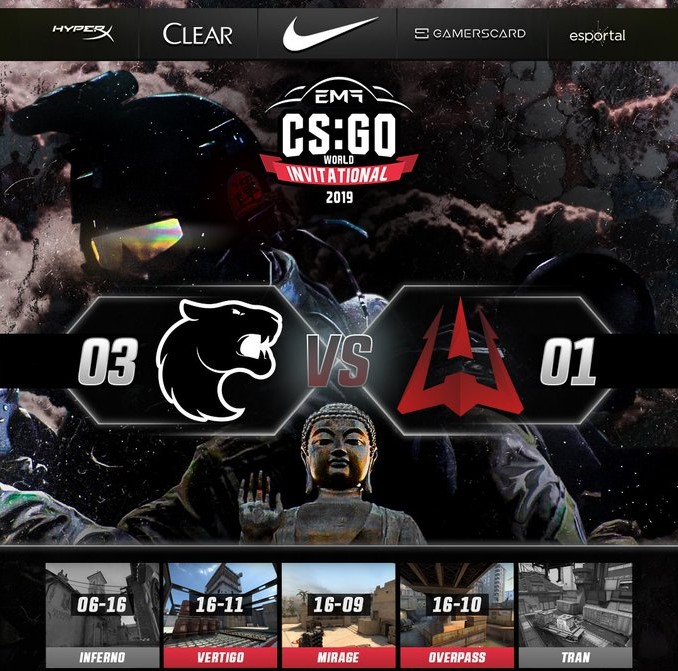 With a satisfying victory over their CIS opponents, FURIA and AVANGAR both gave one hell of a series to everyone watching. With the exhibition match coming to an end both the teams will be preparing for the coming Berlin Major 2019.

FURIA will be playing in the Challengers Stage after having qualified through the Americas Minor Championship, while AVANGAR having had an exceptionally great run at the previous major will be starting their campaign from the Legends Stage.

Let’s see how the two teams perform in Berlin and hopefully we might even see them face each other in an all-out high stakes match-up.