Four reasons why Liquid might win ESL One Cologne 2019

Team Liquid has been on top of the global Counter-Strike scene for quite some time now. The hype that started from Australia after Liquid were crowned the champions of IEM Sydney 2019, has gained momentum as the team went on to win DreamHack Masters Dallas and the ESL Pro League Season 9 - Finals. Not only this, but during their successful run at these events they also dethroned Astralis and became the numero uno team in the world of competitive CS:GO.

Now aiming for their fourth consecutive victory, Liquid is determined to claim both the title of being the ‘Champions of Cologne’ and the winners of the ‘Intel Grand Slam Season 2’. Here are the four reasons why Liquid might just be able to make this a possibility.

The way Elige has been playing recently, he is just unstoppable once he gets into the rhythm. He's not known to be a player who gets into the mood right from the start but picks up the pace a few rounds in.

He has been deadly with his aim, not only trading effectively but getting multi-kills on multiple occasions to give his side the advantage. Plus with him being an absolute madman on the AUG, he has been a big winning factor for Liquid throughout these events. This is despite the fact that the scoped rifle has been nerfed.

The fact that he won the MVP award both at Dallas and Montpellier only bolsters his identity as the anchor for Team Liquid at the moment.

See you guys in Cologne! pic.twitter.com/yw2MX7obh3

Even after claiming victories in premium events such as IEM Sydney, DH Masters Dallas & ESL Pro League Season-9, they are still not picked out as the clear winners for any tournament that they participate in.

Despite claiming the number one position in the world, Liquid are not known to be an absolutely dominating team. They face their fair share of tough matches and close shaves, at times clearing a match just because the opposition makes a mistake. Compared to Astralis who they recently dethroned, they haven't been perceived as a similar level of threat coming into an event.

But all this seems to have just added on as motivation for the NA side who keep performing better after every match to prove themselves. And this seems to be working for them as they have successfully claimed a spot in the semifinals of ESL One Cologne 2019 and are just two matches away from claiming victory in Cologne.

"It was inevitable. You can't knife me. I'm un-knife-able."
-- @nitr0 pic.twitter.com/XmzNoggV7T

Liquid has a tendency for one of its players to stand out in every match. Sometimes it is Stewie2K with his insane aggression with the AWP, while on other occassions it is Nitr0 with the jump on the opposition. Twistzz & NAF have also had their moments, especially Twistzz who won the MVP award for his brilliant performance in Sydney. 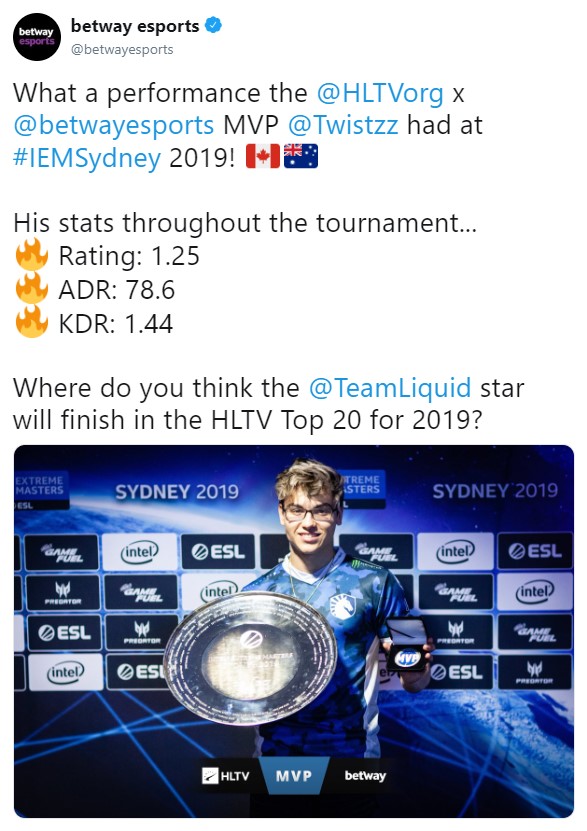 This unexpected rise in performance enables Liquid to bring out different strategies accordingly to outplay their opposition.

They do have Elige as a rock to support them but he is no S1mple or Zywoo. And as is the mark of a truly polished team, their victory does not rely too heavily on any single player, an ace that can help them out of every situation.


4. Primary AWPer? Are you kidding me!

Team Liquid in its own way have broken the barrier of keeping a fixed position for an AWPer. They are one of the only top teams to actually function without a primary AWPer and honestly, it seems to be working out well for them.

From time to time we see Nitr0, Stewie2K or NAF pick up the AWP but it's not a regular thing or their go to weapon. Most likely Liquid are just holding five rifles, a mix of them between the M4A4 and the AUG.

It might not be a meta thing as most of the teams are still sticking to the routine of having a primary AWPer but this seems to be working for Liquid in a big way, giving them that extra bit of versatility and a fresher play style. Let's see if it actually turns out into an all-out phenomenon down the line or not, but while it works for Liquid and gives them an advantage over others, it becomes a valid reason that points towards their victory.

These are some of the facts that put Liquid right up amongst the teams that are most likely to claim the trophy in Cologne. Feel free to comment below if you guys think that some points might be missing or you disagree with the reasoning.