The final day of the PLG Grand Slam 2018 witnessed the Playoffs coming to an end with Fnatic reigning on top as the winners of the tournament held in Abu Dhabi.

This is all the action that took place on the final day leading to Fnatics victory. 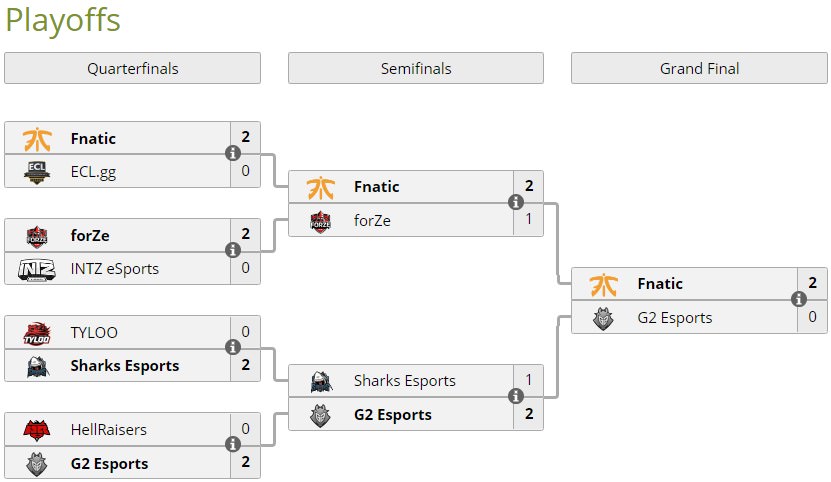 The first semifinal match of the day observed a hustle by Fnatic against ForZe who won the first match on Mirage after clutching multiple crucial rounds, winning by a score of '16-14'.

Fnatic surely low on morale trod carefully on Overpass as they gained momentum and defeated ForZe with an overwhelming score of '16-4'.

The decider was played on Inferno where both the teams went neck-to-neck, taking the match into the third overtime where Fnatic was finally able to attain victory with the scoreboard reading '25-23'.

The second semifinal match played between Shark Esport and G2 Esport was also quite competitive with both Sharks and G2 winning a map each. While Sharks won on Train with a score of ‘16-6’ and G2 won on Dust 2 with a score of ‘16-4’, it all came down to a decider.

The decider witnessed a horrific defeat for Sharks as G2 destroyed them ‘16-0’ on Nuke. Sharks were just not able to break G2’s momentum as they were pummeled pretty bad facing elimination from the event.

The finals between Fnatic and G2 was not as grand as the semifinal match-ups but certainly witnessed a great effort by G2 in both the matches as they lost by scores of ‘16-11’ and ‘16-14’ on Dust 2 and Mirage, respectively.