The ESL India Premiership has been one of India’s most consistent and popular events in the past few years and one that is purely about esports. This year is the 3rd year of the tournament and it’s back with a new format and a massive prize pool of USD 160,000. Let’s take a look at what this season brings where they got it right and where are the areas which could be potentially problematic.

Just like last year, the 2018 edition is divided into three seasons - namely the Summer Season, the Fall Season and the Winter Season. Each of these seasons are identical and will have three rungs in which the competition will take place. The highest level of competition will be the Masters League, followed by the Challenger Series and then the Starter Cups. Each season will have one cycle of the Masters League, 3 Challenger Series and 3 Starter Cups.

The Starter Cup - The Starter Cup consists of 128 teams and will be an open qualifier of sorts with a single elimination format and the top 2 teams moving onto the Challenger Series.

?
A lack of competitors in the Masters League

In theory, a 12 team league system sounds like a pretty comprehensive format which will ensure that consistency is rewarded. However, the top heavy nature of the Indian esports scene is going to be a concerning factor. While the Counter Strike teams are more closely matched, it's still going to be only 3-4 teams who are actually going to be able to output truly high quality matches. Now this is true for any sports league; after all, there is only one champion. However, the problem is that 12 professional teams don’t really exist in India for Dota 2 and CS GO at the moment which could lead to complications. Since all the Masters League games are broadcasted live, it will demand a strict schedule and teams to show up on fixed days. While this is not hard for a team with management behind them to follow, it might not be the case for other teams who aren’t at a place where they can commit to showing up for a complete 3 months.

For Dota, the situation is even worse. Signify haven’t lost a LAN in forever and currently, no team is even close to their level. With Indian Dota 2 viewership already falling drastically, the one-sided match ups are not going to do much to stem the bleeding. Most of the teams who participate will in all likeliness be teams who the general audience hasn’t heard of and while everyone is game for a good underdog story, a quick look at LANs in India last year will tell you just how top heavy the scene is. Scheduling might pose to be another hurdle for the tournament. Any team worth their salt should and will be trying to qualify for DPC events and no team should be restricting themselves to playing exclusively in the ESL India Premiership. Considering how hectic the DPC scheduling can be, with qualifier after qualifier after qualifier this might prove to be a hindrance to teams playing across 3 seasons (approx 8 months) in the ESL India Premiership.


The Challenger Series - An effort versus reward mismatch

The Challenger Series format has been tweaked with this year consisting of double elimination brackets being played out thrice in one season. Now one obvious problem is that teams in the Challenger League have no hope of making it to the Masters for that particular season. At best, they can qualify for the next season. For a team playing in the Challenger Series, this seems like a huge ask. Very few of them are going to be professionals and certainly many of them are uncertain about their futures and whether they can continue playing for months on end. Not only are they committing to playing for 2.5 - 3 months at a stretch, their primary reward also only comes in the next season.

The format of the Challenger series could prove troublesome too. It’s quite obvious that the first 2 cycles of the double elimination format are going to be futile for many teams. As long as they can avoid being one of the first two teams to get knocked out, the rest of the bracket seems pretty inconsequential. There is a 10,000 INR bounty for the winners of each phase but after taxes and shared between 5-6 players it seems like a very insignificant amount for an 8-team double elimination bracket. The teams who want to play in the Masters league will try only in the third phase. Also by definition, a double elimination format is meant to eliminate teams. Here it doesn't seem to be the case unless you are one of the first 2 teams to be eliminated.

One possible solution to improve the Masters League is to invite SEA teams to take part. But in the previous editions, teams were not compensated for travel and stay however saving from winnings were meant to soften the blow to their wallets. Since the prize money per season is not enough to cover the cost of travel and stay, this seems like a hard task.

Let’s look at it in detail here. The first prize for each of the LANs is INR 5,00,000 or approximately $8,000. A round trip flight ticket from the Philippines is roughly about INR 30,000 or $400. From Malaysia or Singapore, it’s slightly cheaper at about $310. Let’s say the entire trip is for a period of 5 days. That’s approximately another INR 30,000 or about $460 per person for food + stay + conveyance. Now if we add all these up that’s somewhere around $4,800 (6 members) for an entire team. That is, they only make about $3,200 from the winnings. Now considering that each of the seasons have about at least 2 months of online play and LAN finals, the amount definitely doesn’t do justice or make it worthwhile for a team to travel to India. 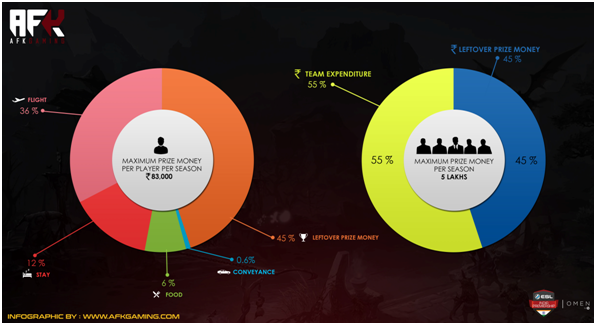 Another solution could be to have lesser teams in the Master League so that the skill difference between the top and bottom teams isn’t as bad.

The Challenger Series as well could be tweaked to allow teams to have a more immediate reward system. A possible solution could be that the winner of each cycle of the double elimination bracket could get a slot in the Masters for the next season.