The action at the grand finals in ESL India Premiership 2017 – Winter Season Finale has concluded. Two undefeated teams, Signify and ROG Titans went head to head with each other in a great series.

Here is a quick recap of what happened in the last series of the ESL India Premiership 2017.


Game 1: The first game of the long-awaited affair opened much like one would have expected it to. While ROG Titans picked safely, as they were rightly worried of their opponents strength in the early game, Signify, in their customary style, came out swinging. The first three picks more or less decided the pace of the game, with Signify showing pure aggression in these three picks (Puck, Tusk, and Tiny). ROG Titans' overaggressive composition of Earth Spirit, Shadow Shaman, and Gyro was followed up by Clockwork and Sw1fty’s Medusa.

The games laning phase played out in the favor of Signify. ROG Titans’ customary dual roam style would try and maintain the tempo, but this gameplan was obvious, as Signify saw right through it. By using the strength of the Tiny and Tusk, they completely crushed Archmage in the top lane before bringing the entire force of their ganking lineup upon the Midlane Medusa.

Having read ROG Titans’ fairly obvious gameplan, Signify started pushing and securing towers using the BlizzarD TerrorBlade. Indeed, therein lay the flaw in the Titan's gameplan. While their early advantage in the bottom and mid lanes should, in theory, have allowed them to transition into a strong midgame, the fact that they lost the Top Lane so hard was what led to their doom. A farmed TerrorBlade, Tiny and Puck took apart ROG Titans' squishy heroes while their Gyrocopter lagged behind without farm.

The problem was that ROG Titans’ lineup had an extremely low margin of error in which all of its early game goals (win mid and top, then force continuous teamfights with their superior Teamfighting lineup, at an advantage while denying TerrorBlade farm) needed to be completed by the 15-minute mark. With such a lofty gameplan, a single setback would have meant defeat against the monster that is Signify, and it did.
? 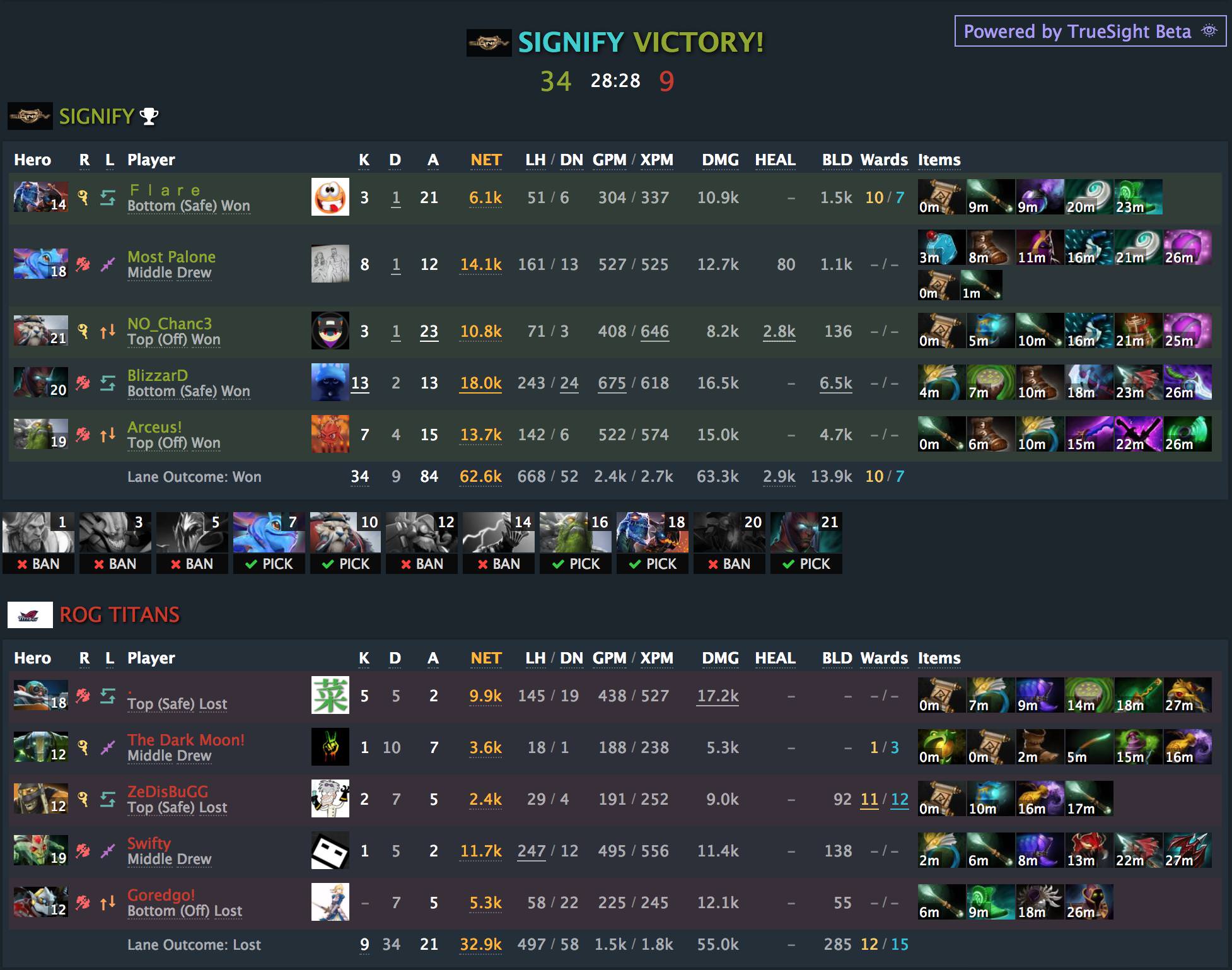 In what would be the deciding game of the series, Signify decided to surprise everyone when they sent BlizzarD Mid on the Storm Spirit instead of Crowley and it proved to be a great decision. Holding himself well in lane, he persevered against the highest-ranked Indian player in the Dota 2 leaderboards, Sw1fty. He bulldozed Sw1fty’s Mirana all by himself, allowing his side lanes to push for an early game advantage.

As the game progressed, kills kept on going in the favour of Team Signify, with them using their ganking heroes of No_Chanc3’s Tursk and PasoLL’s Bane helping BlizzarD rake up a ton of Bloodstone charges and this allowed them to secure a lot of map control advantage over the RoG Titans. The gold lead also helped Crowley and Negi on the Razor and Tiny respectively establish themselves with a strong early game farm.

Against the mobility of Storm and Tiny, and the control of the supports, RoG Titans found themselves unable to exert the strength of their lineup as the team was cornered in the base which allowed Signify to secure all objectives with ease and have complete control of the runes which allowed BlizzarD to decimate any hero he spotted past 17 minutes.

ROG Titans once again picked themselves into a corner with a lineup that required a commanding advantage in the early game, which simply failed to produce any results against a team as experienced and individually skilled as Signify. 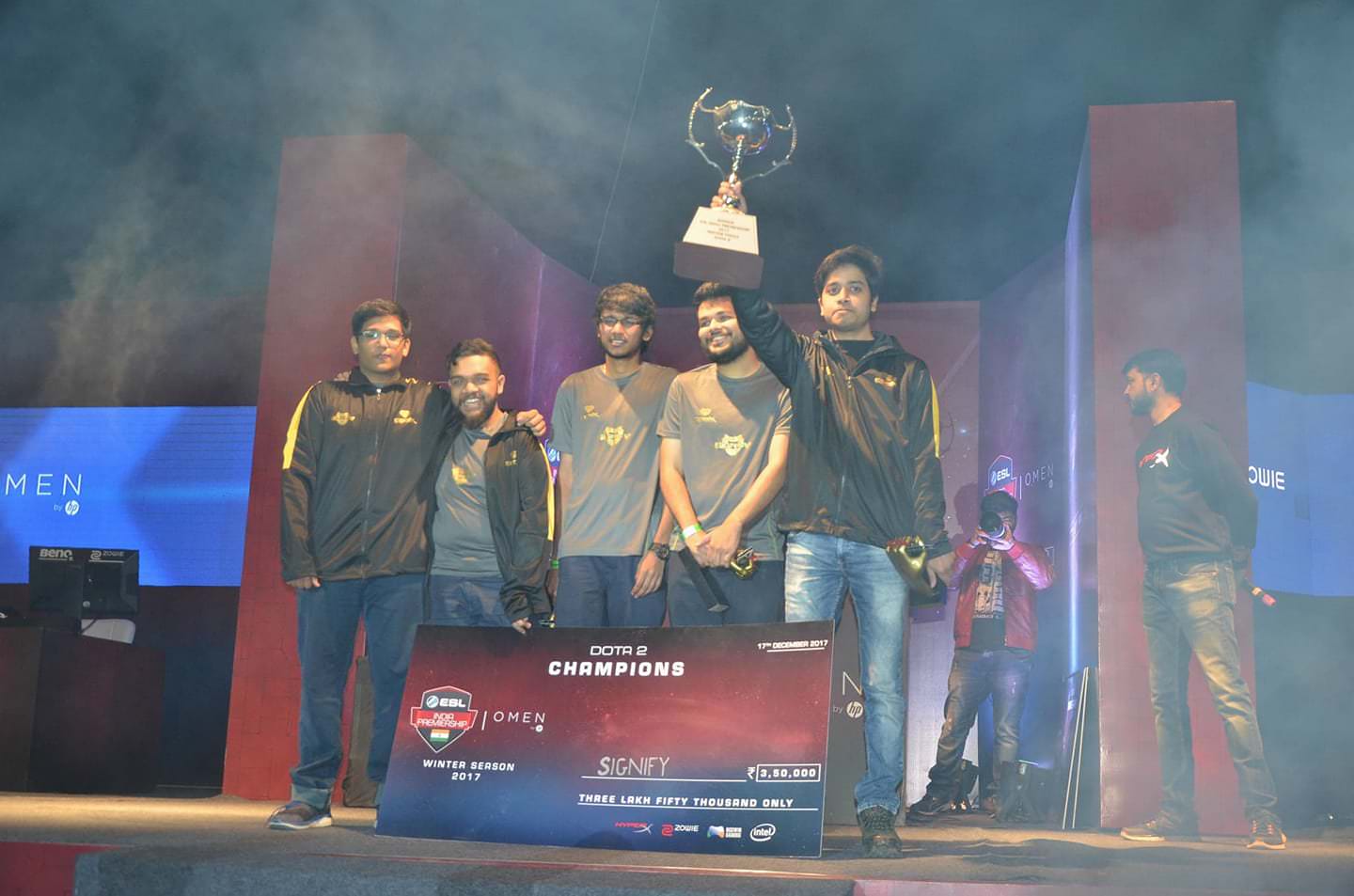 Hence Signify won the series 2-0, securing first place in the Finale and a cool 3.5 Lakh rupees along with it. They have become by far the best Indian Dota 2 team we’ve ever seen.

The CS:GO Grand Finale between 2ez Gaming and Entity Gaming at the ESL India Premiership Winter LAN was absolutely lit. This very heated and intense match will make you momentarily forget about the freezing Delhi evenings. Entity Gaming won 2-0 to lift the trophy; 16-8 on Overpass and 16-13 on Cache.

Entity did their homework

The first map was 2ez’s map pick – Overpass. 2ez started on the terrorist side. Entity won the pistol round and quickly got a 4-0 lead. However, they made some mistakes by overcommitting and trying to go ahead to get picks alone, which gave 2ez the man advantage and let them get to 4-3. Once they got the money to buy again, HellrangeR displayed some very fine lurking and outflanked 2ez, while Marzil was on fire all the time, landing shots and spraydowns to simply outaim 2ez. He even picked up an insane triple spraydown; letting Entity take the lead to 9-3. After a long streak of winning rounds, HellrangeR made a mistake while lurking; 2ez fixed the mistakes they were making and traded well and got the score to 9-4. Too bad, it did not last too long and Entity won the next 2 rounds, sealing the half at 11-4.

Entity won the pistol round of the second half and went on to win the next  3 as well, to get the score to 14-4. Tito and Rexy went ham on the buy round and broke Entity’s momentum, forcing them to eco the next round and bumb their score up to 14-7. However that eco was very expensive for 2ez, as Marzil was able to get 2 free frags, a knife kill and the bomb plant as well. This allowed Entity to buy the next round and win that round to get to map point. They secured the win without wasting much time at 16-8.

2ez stared out as Terrorists and won the first three rounds. When the buy round came around; Entity decided to go for a double AWP setup, which destroyed 2ez. The score was 3-1. Expecting an eco B rush from them the next round, Entity set up a B stack. But instead, 2ez rushed A; and got a plant since Entity played for retake. But Entity had no molotovs to clear out the 2ez members who had set up crossfires at great angles. 2ez managed to win that eco round, effectively breaking Entity’s economy; letting them extend the lead to 1-8. However, things started going south when Entity was able to buy again. 2ez rushed B, and were shut down in every possible way. They tried several more rushes and executes, but Entity stopped them in their tracks every time, and bridged the score gap to 5-8. 2ez tried to do a split-and-fake strategy, spreading Entity’s defenses thin and won another round. But Entity did not slack far behind; ending the first half at 9-6 in the favour of 2ez Gaming.

On the CT side, 2ez pushed out to B, and they shouldn’t have done coz Entity players picked them right off, leaving B site ripe for the taking. Entity won the pistol round and the following rounds; equalizing the score at 9-9. 2ez did a very good job at retaking bombsites and won an rounds, once again taking the lead at 9-10. SpawN pulled off a 1v2 clutch and took it further to 9-11. One thing that 2ez did very well in this match was make eco rounds count. They made Entity bleed so much even on eco rounds, and kept their hope alive. It should have been a cakewalk for Entity if 2ez wasn’t so good on eco rounds; or perhaps if Entity made several mistakes on Anti-eco rounds. Rounds exchanged, shots fired and after a back and forth, when the scores were 11-12, we witnessed the sweetest play of the year! In the writer’s opinion, this is the sickest play he has seen in a very long time! A Molotov + flash combo by Falken roasted two 2ez players to death before any shots were in fired in the round. This absolute beauty of a play broke 2ez on the buy round that was critical for them. The scores were now tied at 12-12. Breaking 2ez on the crucial buy round, Entity forced them to eco. Even then, 2ez did not go out without a fight as they picked up another round on a force buy and get the score to 13-13.

Marzil got bored of this back-and-forth match and went beast mode, single handedly picking up 3 kills at B, which destroyed 2ez Gaming, paving the way for Entity’s victory. The map ended at 16-13. 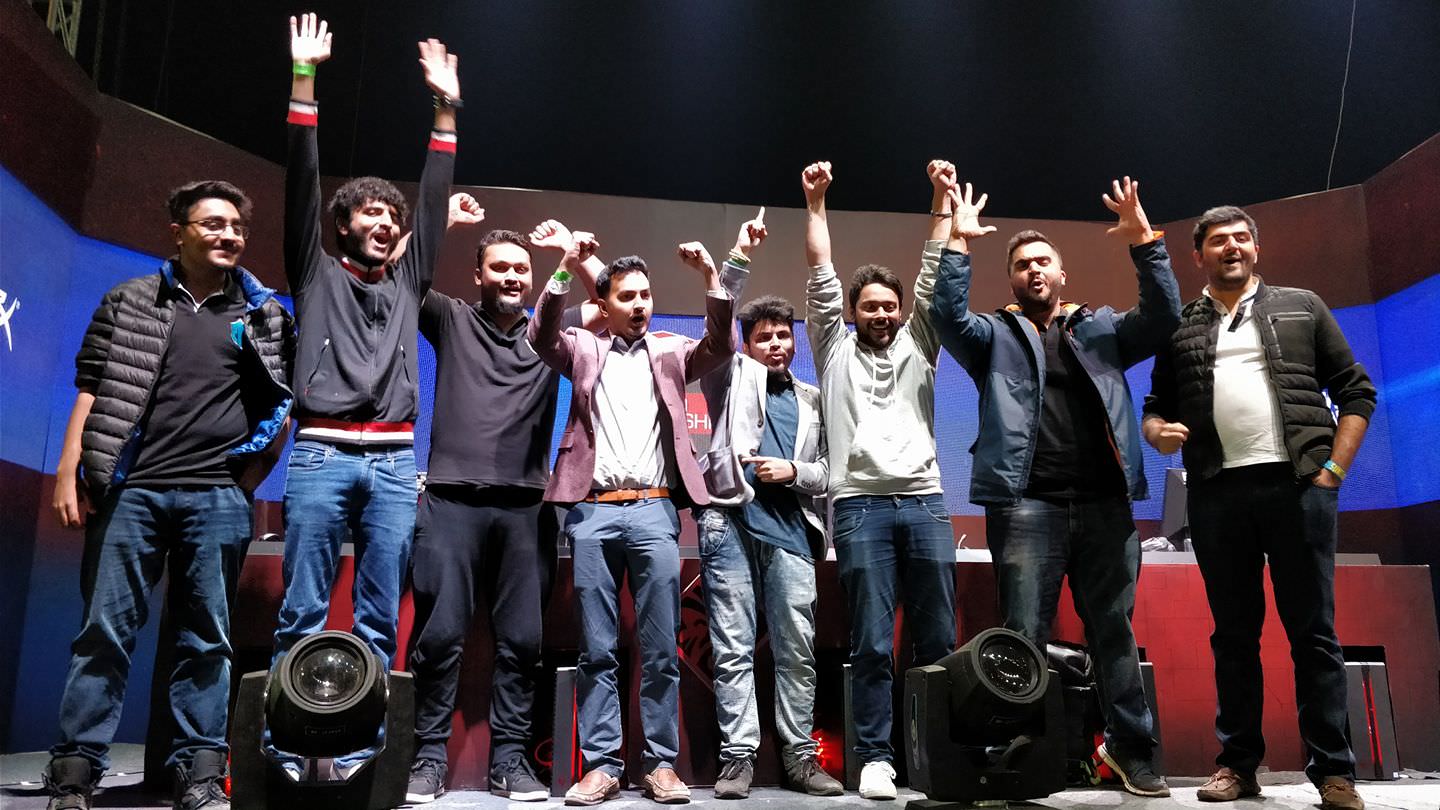 Congratulations to Entity Gaming for this amazing victory. Hardly any time has passed since this team was formed, and they have already picked up the biggest tournament of the year! We wish they keep getting better and take on bigger teams!
About UsContact UsServicesRSS
DisclaimerAdvertise With UsArchiveEditorial Team