Nazara Technologies who announced in 2017 that they would invest 20 million $ into esports and India, in particular, has announced that ESL has acquired a minority stake in their company. This comes after their recent announcement that they themselves have acquired a majority stake in NODWIN Gaming.

NODWIN themselves had been working with ESL for many years and have also signed a license agreement with them, allowing them multi-year exclusive licensing rights for the ESL system and ESL community platform for organizing and operating ESL competitions in India. NODWIN also secured media distribution rights of ESL global content to local and linear digital platforms in the Indian subcontinent.

Co-founder and CEO of ESL, Ralf Reichert quoted “Our goal is to bring esports to the players and fans all around the world. We believe that Nazara, one of the leading mobile game companies will help us in expanding our ESL operations through strategic local partnerships.”


Nazara has been working behind the scenes for a while now and has received investments from IIFL Asset Management and Rakesh Jhunjhunwala recently. It already has existing investments in mobile gaming companies like NextWave Multimedia, Mastermind Sports, Moong Labs and Hala Play. Its focus has been markets in India, SEA and the Middle East and the process of building a network wide enough to reach all these markets is already underway.

Manish Agarwal, CEO of Nazara Technologies was upbeat about ESL’s involvement and went on to say “We believe that our partnership with ESL and NODWIN Gaming will enable us to leverage the strength of the global experience of ESL, the execution experience of NODWIN Gaming and on ground networks of Nazara across different countries in emerging markets.“ 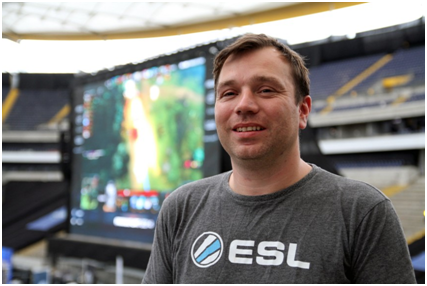 ESL CEO, Ralf Reichert
Source: TVOvermind
With a big player like ESL showing interest in India, we can only hope that some of their big-ticket LANs like ESL One, ESL Pro League or Intel Extreme Masters find place in India. With big money and established names investing into the scene (also read : Over 1 Crore to be won in esports in 2018 from NODWIN Gaming), there is a long-term vision and focus on the Asian markets with India as one of the prime targets.
About UsContact UsServicesRSS
DisclaimerAdvertise With UsArchiveEditorial Team