The Africa Closed Qualifier for the StarLadder Berlin Major 2018 concluded today with Energy Gaming making its way through to the Asia Minor Championship - Berlin 2019.

Eight African teams took part in the closed qualifier, all of them making their way through the open qualifiers. The closed qualifier which took place over the course of three days witnessed some top-level CS action from the region and this is how it all went down. 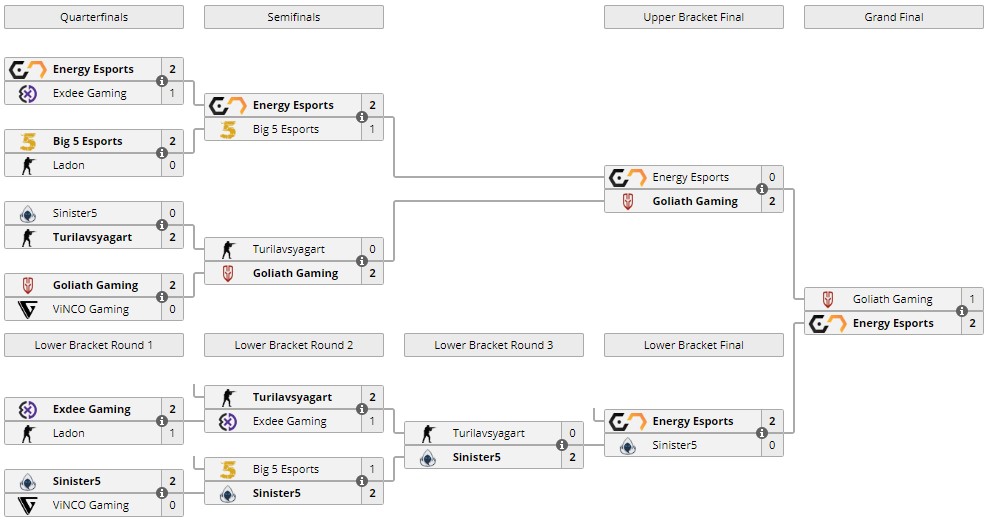 Energy had a pretty rough start going ‘2-1’ against both Exdee Gaming and Big 3 Esports, both of whom are considered to be great teams.

Energy had to bear a lot of stress against Exdee after they secured the first match on Mirage, Energy retaliated hard in the following two matches to secure their opening game. Mistem found his rhythm a bit late but in time to not let the team drop down to the lower bracket.

Again in a fix in their match against Big 5, the team managed found its way through in the second overtime. Looking forward to picking a comfortable victory on Dust 2, Energy fell on its own map but destroyed the opposition on Overpass to attain revenge and secure the series.

The semifinal clash against Goliath witnessed a heart-wrenching defeat as Energy were outplayed on both Nuke and Overpass quite badly. But the team came back and faced them in the finals after defeating Sinister5 in the lower bracket finals.

Energy adamant on avenging their earlier defeat struck victory on Inferno but were stopped shut on Nuke. The decider was played on Train where some crafty tactics by Energy gave them the upper hand over the opposition securing them the series and the closed qualifier.

GG!
Energy Esports takes down Goliath Gaming in the Grand Finals of the StarLadder CS:GO Asia Minor CSA Closed Qualifiers!
We'll have more info to share soon, well done to our opponents and thank you to our supporters for your support! pic.twitter.com/kUXF85n7Iy

The team will be seen in action in the Asia Minor Championship - Berlin 2019 which will be taking place from 24th-28th July in Berlin with a prize pool of $50,000.