The first semifinal of the DreamHack Masters Dallas 2019 comes to an end with Liquid qualifying through to the Finals. The top NA squad were up against the dark horses of the event, FURIA Esports and boy was it fun to watch this Brazilian squad play such fearless CS till their very last moment.

This is how the two maps went down, 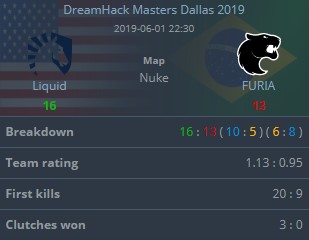 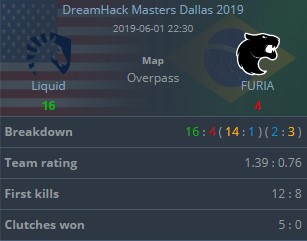 The first match took place on FURIA’s pick Nuke, though most had predicted Liquid to go through, there was some doubt because of the way the boys in blue had been performing on the map lately.

The way FURIA started put it looked as if Liquid were totally out of control and this would all be over quickly, but in the fifth round Liquid were able to choke FURIA at squeaky which lead to a shift in momentum as Liquid kept pressuring FURIA for the A execute.

The counter aggression did wonders for Liquid as they were able to attain a healthy lead at the halftime mark after a disastrous start. This was followed by FURIA once again taking the upper hand with their fast paced executes.

Liquid inched towards the map point but all hell broke loose when FURIA strung four rounds in succession to creep up on Liquid. EliGE won a close 1v1 clutch against arT to help Liquid reach map point which was followed by another triple by him to close out the map in favour of Liquid.

Hey @EliGE do you have any problem with me, bro?

The victory was a huge confidence boost for Liquid who transitioned it well into their map pick overpass, which is one of those maps where FURIA struggles quite a bit. And this became evident when Liquid went on to stomp them by a score of ‘16-4’ out of which 14 rounds came in the first half itself.

Stewie2K was the king of this match with his aggression at an all time peak against a team that has no fear and literally flies through the map to catch the opposition off guard. 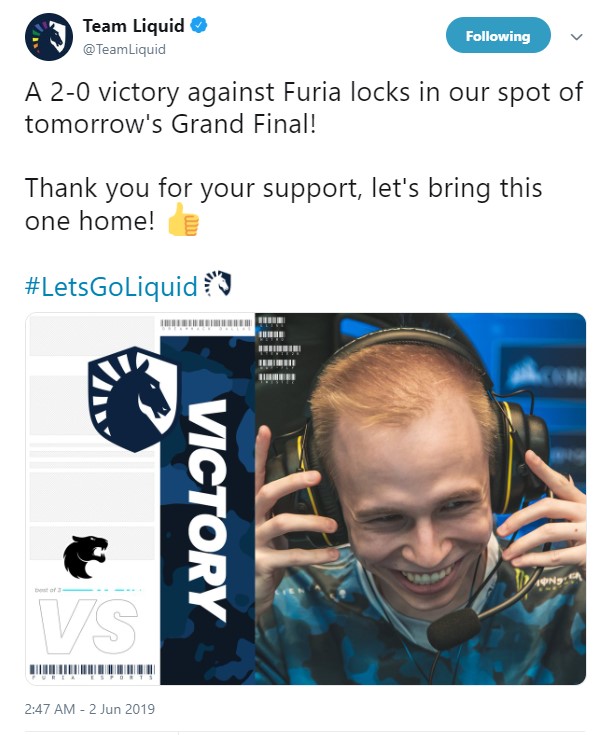 FURIA played the best CS of their life here in Dallas. They were phenomenal and not because they practised a tried and tested method or formula, No. But because they got a freshly baked recipe of their own, which bamboozled each and every opponent that the team has gone up against.

They have been overly aggressive, fearless in their execution, beat the timings at certain areas where they catch the opposition off guard, come up with out of the book rotates and were performing much better individually as well.

Even ENCE had to take a breather against them. But Liquid did a fine job today against them, they did not stick to the book or try to break it down tactically. They replied with effective use of utility to choke them, flush them out and break their aggressive rushes. Some unorthodox rotates from NAF and aggressive awping by both Nitro & Stewie2K also worked in their favour.

They simply boiled it down to individual skills and raw aggressive mentality. It was certainly close on Nuke but it did work.

Let’s see how does it go down between FaZe Clan & ENCE. Who gets to face Liquid in the finals, to be declared as the Champion here in Dallas.