DreamLeague S9: Secret take the trophy with a clinical 3-0 over Fnatic

The finals of the DreamLeague Season 9 Minor came to a close with Team Secret coming out on top. Puppey and his boys finished the tournament without losing a single game, and this is their 3rd DPC event win after DreamLeague Season 8 and Captain’s Draft 4.0. And for the second time this season, Fnatic placed second and were unable to go the entire way.

In game 1, Fnatic got off to a good start, pressuring Ace’s LD quite a bit in the early game. However, they neglected Fata and Midone who started picking up the pace. Soon enough, Midone was able to get solo kills on his own and started pressuring lanes quite a bit with his Helm complete. This finally freed up Ace, who quickly moved over to the jungle to catch up in farm. Fnatic despite leading in net worth were unable to get much done as their attempts at taking objectives with the Shadow Shaman wards was easily thwarted by the Visage familiars and the LD's bear.

Fnatic lost map control and objectives and had no way to initiate team fights especially against Secret’s superior vision. All of Secret’s cores were now leading the net worth and soon took down Fnatic’s base with no contest. The game was all about Secret waiting patiently for their power spike and farming their core items before finishing off the game in one swift move. Fnatic made very defensive items on their cores and lacked damage to actually take fights.

Game 2: The closest of the lot

In game 2, Fnatic got their hands on the LD, a hero they had run successfully in the past. However, Secret quite literally had an ‘Ace’ up their sleeve in the form of a carry Bristleback. The rarely picked hero looked overpowered the way Secret played him and the fact that he was backed up by a Wisp, didn’t help Fnatic either. Not only did he finish the game without dying, he kept Fnatic occupied for much of the game, creating space for Midone’s PL to hit critical mass.

While the Fnatic cores farmed well and had good item timings, they never could engage head on and come out on top. 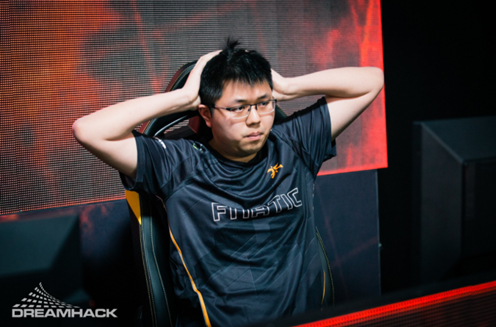 In game 3, Secret paired up Midone’s signature Kunkka with Puppey’s BH in the midlane, something that Abed was not quite prepared for. Much of the early game was Fnatic responding to the BH’s movements and this allowed Secret to take control of the game. Despite a few deaths on Puppey, their cores looked much better than Fnatic’s and started to come out on top. With more objectives and map control going their way, Secret effectively locked out Fnatic who tried their best to dodge fights. With an Aegis on Tiny, they successfully baited Fnatic into a bad teamfight at the 31 minute mark. Secret got all 5, only giving up 2 heroes in the process. At that point, Fnatic were miles behind and hoping for a miracle to turn the game in their favor. However, none came their way as Secret took another clinical fight at the 33 minute mark to force out the gg and walk away as the champions of the series and the tournament.

Secret maintain their 3rd position on the DPC leaderboards, while Fnatic have slowly cut the gap between themselves and Mineski to just 16 points. They currently sit at 10th place.