5th, Apr, 2018
At the end of day three, there are still eight teams remaining as no elimination matches were played today. LGD Gaming, Team Liquid, Mineski and Vici Gaming are in the winner bracket semifinals whilst in the loser's bracket, there are 2 NA teams, one SEA, and one CIS team remaining.

Kicking off the day was a match between Evil Geniuses and LGD Gaming, this best-of-three series had viewers on the edge of their seats especially after PPD’s comments yesterday. He said "NA Dota, excluding Virtus Pro, is the Best Dota in the World". The first game of this best-of-three series was very back and forth. At 29 minutes into the game, EG had a 6,500 net worth advantage, but at the 33rd minute, the advantage was lost to LGD Gaming and six minutes later, the advantage was back up to 4,000; it was at the 43-minute mark that LGD Gaming broke the cycle and won the game. Riding on this momentum, LGD Gaming took the series, winning game two with an 11/2/8 Gyrocopter. Ame, in particular, was on fire for LGD gaming today.

The next game of the day featured the favorites to take the event, Virtus.Pro, against the reigning TI champions, Team Liquid. Team Liquid drew first blood in perhaps the most closely contested game of the day with Miracle showcasing why he is considered the best player in the world playing a phenomenal Nature’s Prophet.


The next game was won by Team Liquid in a convincing fashion with Matumbaman’s signature Lone Druid leading the way towards victory. Although the scorecard might not show it, Matumbaman was the architect of the victory with a 15-minute Radiance making it impossible for Virtus.Pro to gain any sort of momentum.

Mineski had a fantastic start to the game, finding kills and towers around the map, but OpTic were not too far behind as they were able to find essential pick offs on Mineski’s cores which kept them in the game. But even so, Mineski were able to continuously farm a lot faster than their opponents, racking up a 10k net worth lead in under 20 minutes. After this point the SEA squad claimed an aegis and were looking set to take the first game of the series as they dropped all outer towers on their opponent’s side of the map. With just over half an hour gone, Mineski had complete control of the game and claimed another aegis – the fight that proceeded this saw them destroy OpTic once more and the NA team had to call GG.


The second game had a similar start with Mineski taking the early game by creating tons of pressure and playing very aggressively in the early moments. The game just escalated from this, as Mineski just continuously found kills even cleaning up 4 from the NA squad’s line up in a fight that was turned around really quickly. Looking absolutely unstoppable, Mineski dominated their opponents – with Jabz Nature’s Prophet being the playmaker for the SEA squad in both games, it took just over 25 minutes for the 2nd one to be over.

TNC Predator was on point in the first game against Vici Gaming. They dominated the entire game from start to finish and looked like they would take an easy 2:0 from the Chinese team. VG wasn't that easy to roll over twice though and they lashed back in the second game with incredible team fights with constant saves to keep TNC Predators’ aggression at bay. TNC just couldn’t find any kills/pickoffs thanks to Vici Gaming’s composition. Vici Gaming abused this to take constant teamfights and secured Roshan with which they pushed into TNC’s base to take the match and push the series to a third deciding game —the first in the main event so far.

TNC started the game very much on the front foot, constantly picking off Zhang ‘Paparazi’ Chengjun’s mid lane Dragon Knight. Vici was able to find some kills on the map but TNC were playing their usual fast pace and had complete map control as they dropped all the outer towers by 25 minutes. But Vici were able to hold out for a long time, quelling the pressure from TNC – but they were still at a massive gold deficient. The game turned around completely though as Vici kept their composure and turn around everything that was thrown at them. As the one hour marked approached Vici had almost claimed mega creeps, but TNC held firm for now. However, the next fight came with an Aegis-equipped and it ended the game as the GG call came out.

This will, of course, be followed by the kick of the 1v1 tournament 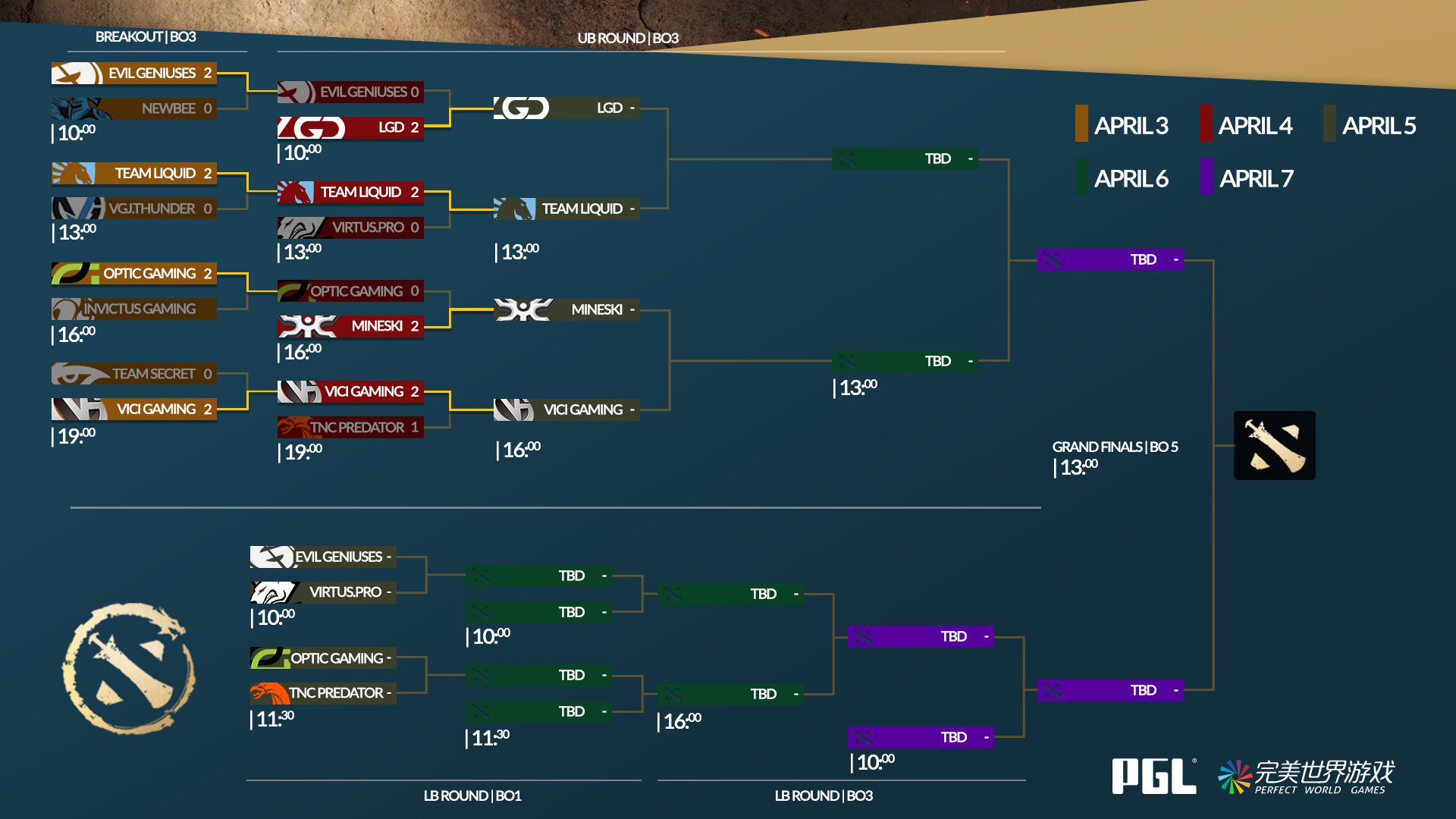