1st, Apr, 2018
Day 3 of the Dota 2 Asia Championships has finally come to a close and with that, we have our first eliminations and our first confirmed Playoff entrants.

We also saw the first Pangolier pick since the patch dropped on Thursday. All in all, today was just as good as the first two days of the tournament with some great games, and overall has been going quite smoothly for fans and the production team.

Here’s what happened on Day 3 of the Dota 2 Asia Championships 2018.

This group continues to be a highly contested one with several teams vying for the top spot, and several teams battling to not be in the bottom 2. In fact, Keen Gaming with 1-5  scoreline happens to be the only team whose fate has already been decided at the end of Day 3.

OG is second from bottom with a 2-4 scoreline after losing both games today, they need to win their final match tomorrow against LGD Gaming to have a 2nd chance at the tiebreakers. Newbee, after a rather disastrous start to the tournament, managed to claim wins in both of their games today and stabilize themselves in the middle of the group. The top of the group was held by Team Liquid, LGD Gaming and OpTic Gaming who were all on a 4-2 record after Liquid demolished the North American team in under 20 minutes and LGD were able to take down Vici Gaming late in the day.

Once again, TNC Predators started the day poorly with a fairly quick loss to Team Liquid’s aggressive push draft. Their Ember Spirit pick which did some work in the mid-game was unable to hold the game against the combined might of Team Liquid’s cores.

They later took on OG, a loss here would push them to the bottom two risking elimination. However, Raven’s tried and tested Gyrocopter was the architect of an easy victory with a whopping 16/1/10 KDA. Not ever Jerax’s surprise Pangolier pick was able to hold off TNC Predators.

Group B is almost done and dusted. No matter what the outcome of Day 4, Virtus.Pro will be the top ranked team in the Group as they continued to be unbeatable, now boasting a 7-0 win-loss record (Perhaps, they are gunning for a place on our ‘Perfect runs’ list Kappa). They will, however, face their toughest test yet, against Team Secret, tomorrow.

With the release of patch 7.12 just a few days ago and the introduction of  Pangolier  would make one of the biggest games of the group for the day Team Secret’s match-up with Mineski which saw Pangolier get picked up by the SEA team as iceiceice (really, who else?) threw the hero around the map – while Secret attempted to counter it with a Bloodseeker, it was nowhere near enough as Mineski crushed them and ended the day with a 5-1 record.
?
With a win in their next match of the day against VGJ.Thunder where they completely rolled through the Chinese team with a push heavy draft featuring a 4-position Jabz Nature’s Prophet, they go into Day 4 with a 5-1 record.

They will take on Evil Geniuses, who are also on a 5-1 record. The winner of this matchup will directly qualify for the playoffs while the loser will have to play in the Breakout bracket. 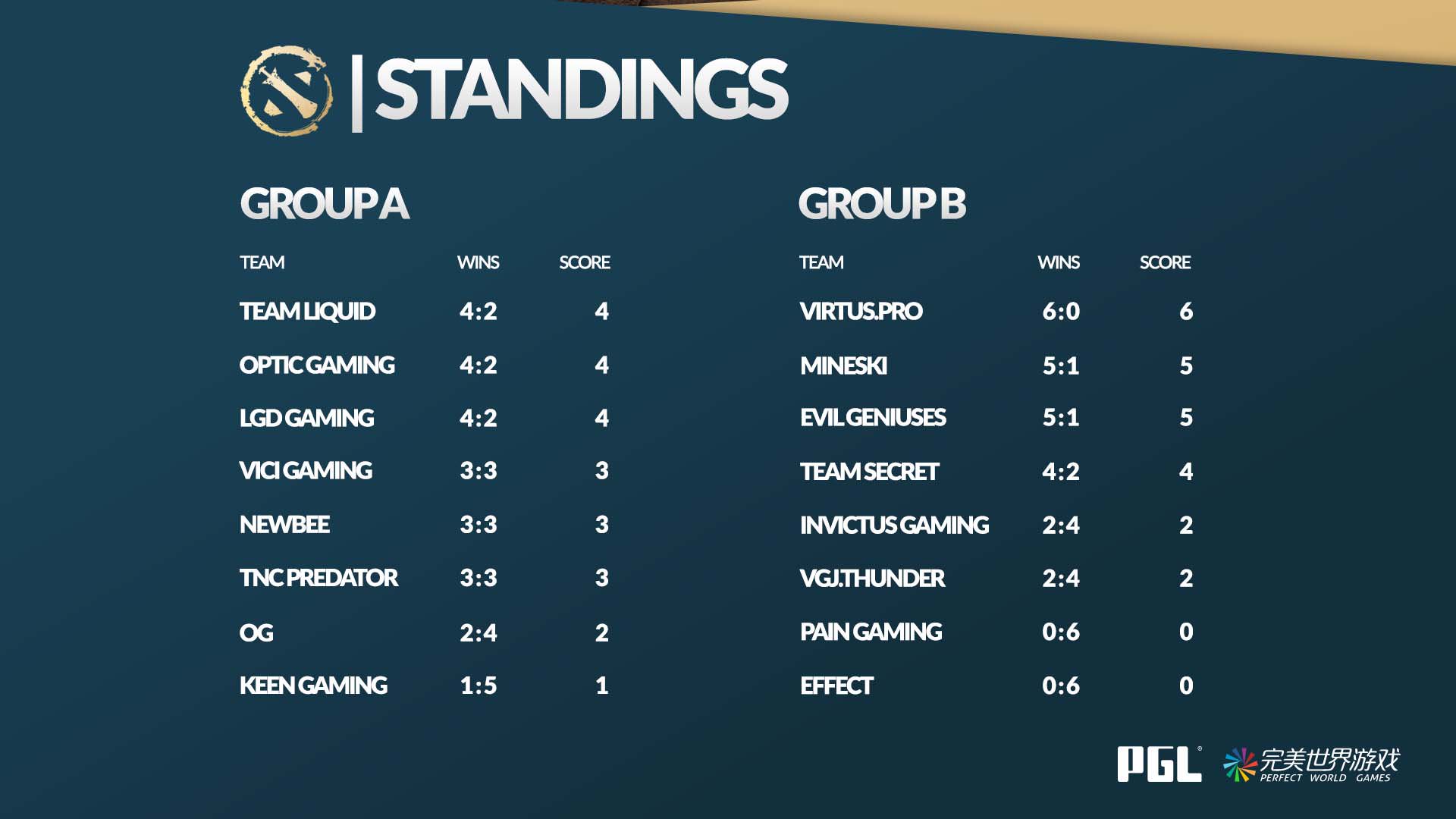 Tomorrow will bring on the closure of the group stages and we will finally find out which teams will move on directly to the playoffs. Group A’s matches, particularly OG’s matches, will be the matches to watch out for as they would definitely need to put out a performance of the highest order to stand a chance to stay alive at the tournament.

Tomorrow will also bring us the first stages of the 1v1 Tournament. The way the bracket is set up guarantees an East vs West matchup. Here's the schedule for tomorrow: 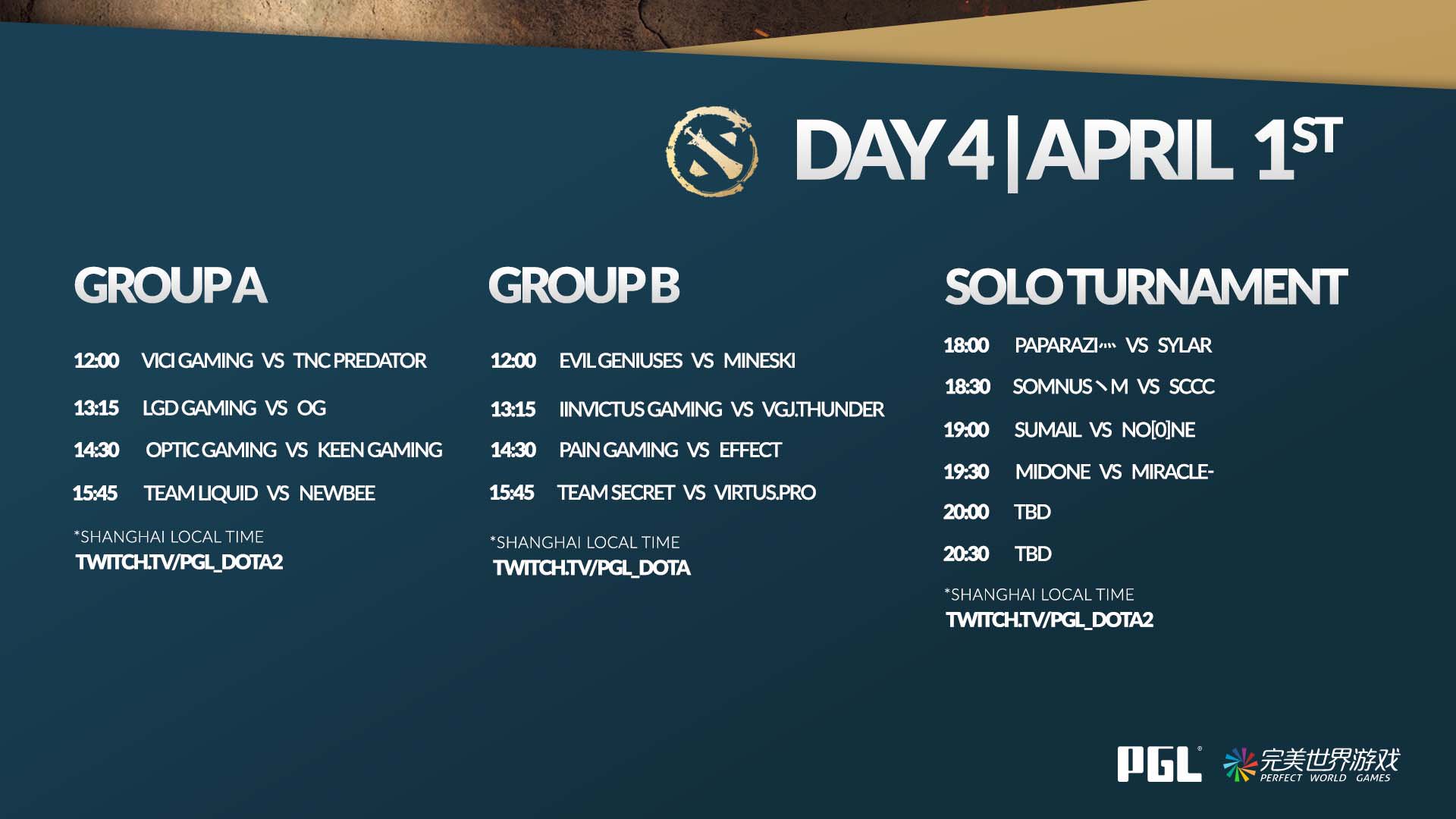