31st, Mar, 2018
We’re now past the halfway point of the group stages, all 16 teams have now played 4 of their 7 matches and with the conclusion of Day 2, we now have a clearer picture of the how the playoff bracket and the breakout bracket will be formed.

The matches kicked off with OG going up against OpTic Gaming. It turns out that 7mad was right, after all, the standin Coach almost single-handedly carried OG past Optic Gaming as they finally handed out the first loss in the tournament for the NA team. OG repeated their result from yesterday, winning one and losing one. Other teams following a similar result were, Vici Gaming, and Team Liquid, who are now the middle of the pack in Group A.

Surprisingly, LGD Gaming came back swinging hard from yesterday and established their place at the top of the group along with OpTic Gaming. Sadly, Newbee does not seem to be in their top form in this tournament, although they did win their second game of the day against TNC to avoid an embarrassing 0-4 result on the board. Keen Gaming, share the bottom place of the group with Newbee at the moment. The Team Liquid versus OG game, one of the most anticipated of the day, ended in favor of the former who played with their full roster. They, unfortunately, did not achieve the same against Vici Gaming, who completely outplayed Team Liquid’s experimental draft with Lina and Faceless Void.

TNC Predators started off the day with a fresh draft seemingly inspired by reading yesterday’s patch notes. A Leshrac-Timbersaw-Slardar lineup saw them crush Keen Gaming in under 30 minutes as the Chinese team just couldn’t keep up with the pace of TNC Predator’s aggressive lineup. The 2nd game also started off well, TNC dominated Newbee for well over 45 minutes before they ran into a brick wall which was Newbee’s lineup. An Underlord, Nyx with Aghs, Pugna, Dark Willow and Gyrocopter made it impossible for TNC to approach the high ground, and impatience from the SEA squad caused them to throw the game despite being in a comfortable position.

Virtus.Pro still show no signs of slowing down. The number 1 team on the Dota 2 Pro Circuit table, still haven’t lost a single game at the major and have shown that it is gonna take something special to know them of their perch. Meanwhile, Effect and paiN Gaming are still yet to register a single win at the end of Day 2.

Evil Geniuses showed that they are slowly closing down the gap between the top 3 teams (Team Liquid, Team Secret and Virtus.Pro) with a scintillating victory over Team Secret with a unique draft including a Leshrac and Slardar in light of their 7.12 buffs. VGJ.Thunder was once again in the spotlight as they played in what turned out to be the best match of the day, against Team Secret.

Mineski dominated the 1st match of the day against Effect with an iceiceice Chen and Moon’s Invoker stealing the spotlight, as they completely took over the game with some brilliant rotations. An overwhelming gold lead saw them easily take the highground and close out the game. The 2nd game of the day saw them get completely runover by Virtus.Pro’s flawless plays. Iceiceice and Jabz were the only two players who could somewhat match VP’s aggression, but that too was shut down after VP had way too many items to beatdown Mineski. 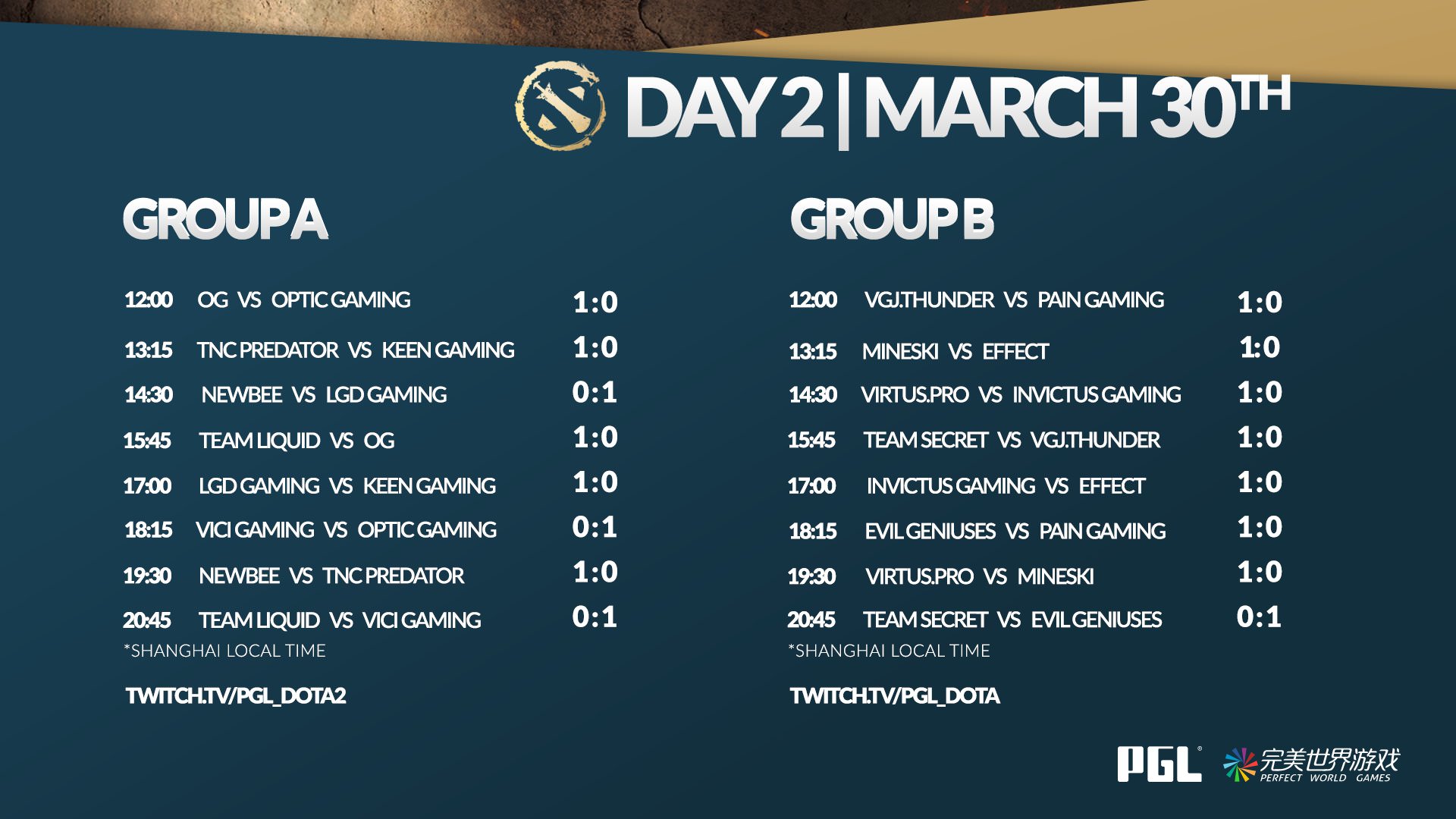 Tomorrow will be the penultimate day of the Group Stages where we will most likely find out which of the teams are making it directly to the Playoffs. paiN and Effect Gaming desperately need a win to stay alive at the tournament. The same goes for Newbee and Keen Gaming, who need to start building on their solitary win if they want to progress.

Here’s the schedule for tomorrow: