CS:GO records its Highest User Gain in the last 6 years!

CS:GO has witnessed a slump since the first quarter of the year. But all has changed since the month of December, when the game went free to play and received a mini Battle Royale mode among other updates.

The game's user stats and viewership for the month of December have seen a monumental improvement as witnessed on both Twitch and Steam.

Running out of Steam?

The last 30 days have been great for CS:GO, with an average player count of 371,291 which is the highest number in the last 9 months. An incredible peak of 746,548 users was witnessed on 8th December. This was the highest recorded peak user count for the year 2018, giving them the much-needed boost.

The game also witnessed a gain of 61,205 unique users, which is expected to further increase till the end of December. This is the highest recorded number since August 2012 mostly because of CS:GO going free-to-play.

All the stats mentioned above clearly point towards the update breathing new life into CS:GO. 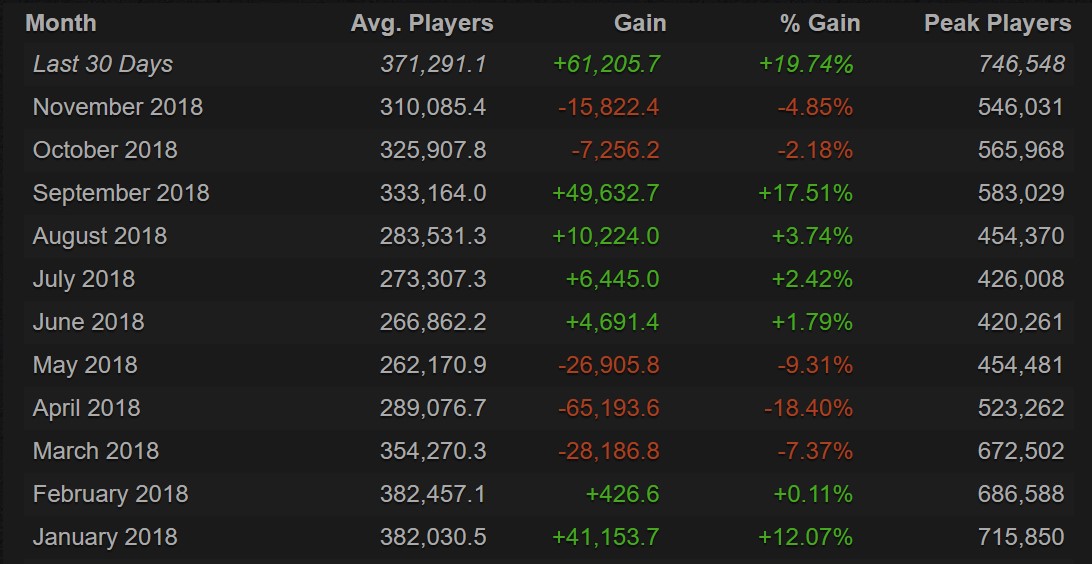 
Twitching to the top

The game witnessed fair amounts of success on Twitch as it shot to the very top of the charts as 'the most viewed game' in December with a peak viewer count of 273,267. At the time, this number even surpassed the viewership for a game like Fortnite which was observing the first day of the start of its seventh season.

It also observed an average viewership of 37,306 accumulating about 22.3 Million Hours, due to many CS:GO  streamers having a ball of a time streaming the new Battle Royale mode.

This is a great achievement for the game as it is very unusual for CS:GO to jump to the top position in the absence of any tournaments taking place.

Steam was not officially launched in China until June 2018.

The Steam Community page was banned in December last year in China but everyone still had access to the Steam Store and Steam itself. Now finally partnered with Perfect World, Steam China is poised to attract a lot of users towards itself while also being the go-to destination for a lot of local game developers. This coupled with Asia's high adoption rates for free to play games ought to be a major driver for CS:GO's userbase.

Earlier this month,the Chinese government's 'Online Ethics Committee' is rumoured to have banned 9 popular game titles in China. This list does not include CS:GO. With the game now due to be published in the country via Steam China, it's likely that compliance with local censorship laws will not be a hindrance to its release.

Could these factors lead to a CS:GO explosion in the Asian region? If it does, will the core game be enough to retain the new users? Only time will tell. What do you think Valve needs to do in order to acquire and retain a larger player base for Counter Strike?