9th, Jul, 2017
In 2016, INR 76 lakhs was paid out as prize pool in Indian esports tournaments. 2017 has looked a lot more promising with the frequency and prize pool of tournaments trending upwards. However so far, this hasn’t resulted in a proportionate rise in participation or viewership. 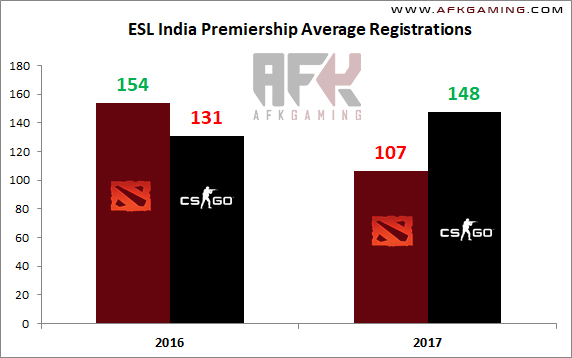 Assuming that the numbers on ESL.gg are credible, a quick analysis of the same reveals the following key observations:
The conclusion of the ESL India Premiership Summer LAN Finale marks the end of another season in Indian esports. As the Fall season commences, here are three tournaments that YOU can sign up for.

Also See : 8 upcoming Indian esports events that you must attend in 2017
About UsContact UsServicesRSS
DisclaimerAdvertise With UsArchiveEditorial Team