CQ Major SEA Regionals: Tigers stumble as BOOM ID and Mineski through to the playoffs

Minor champions Tigers, dropped out of the Chongqing Major SEA Qualifiers with a loss to BOOM ID while Mineski brushed aside Lotac in Group A to move onto the playoffs. With this, we have the 4 teams who will play for the two spots at the Major. TNC will take on BOOM ID while Fnatic squares off against Mineski in a double elimination header, tomorrow.


WG.Unity fail  to pick up a single win in the qualifiers


In group B, Malaysian side, WG.Unity failed to pick up a single win as they fell in the eliminator to BOOM ID who looked to be pretty much in control. The TA pick coming out of BOOM ID in both games, worked a number on the WG.Unity lineup who seemed ill-prepared to take on the hero. The rest of the lineup pretty much snowballed off of TA’s momentum as BOOM ID found wins within the 35-minute mark in both games.


Elsewhere, in Group A, Mineski looked to qualify for their first DPC event of the season as they took down Lotac in a clinical 2-0 performance. The addition of pieliedie seems to have made the difference as Mineski look significantly stronger than they did in the previous qualifiers. Game 1 saw Febby’s Wisp and JT’s Gyrocopter lay in on the Lotac lineup while Nana provided the control in teamfights with his Ember. The game stayed even in the laning phase till Gyro decided to rotate and the game quickly fell apart for Lotac from that point onwards. In game 2, JT once again went uncontested on his safelane Morphling and with kpii’s Brewmaster and Nana’s Puck providing ample crown control, teamfight’s were quite easy for Mineski to take. By 30 minutes, the Morphling was way ahead of the rest of the pack and Mineski feared little as they stood their ground and forced out the gg.


Back in Group B, the Tigers took on BOOM ID for the last remaining spot in the qualifiers. Game 1 was close with BOOM ID leading in much of the early-mid game only for Tigers to win some clutch teamfights and take the win. BOOM ID made the crucial mistake of ignoring the DP who dealt way too much damage in the teamfights as they lost consecutive fights and the game. In game 2, Fervian’s 20-1 performance on the Morphling sealed the Tiger’s fate as they were never able to go toe to toe with BOOM ID. In the final game of the series, the Tigers draft looked way too passive and BOOM ID punished them for it with an early Blink Dagger on the Axe and a mobile Monkey King. While Inyourdream’s PL found the farm, the heavy aoe damage from the BOOM ID lineup made it difficult for him to get into teamfights as the Indonesian team took one good fight after the other and forced out the gg. 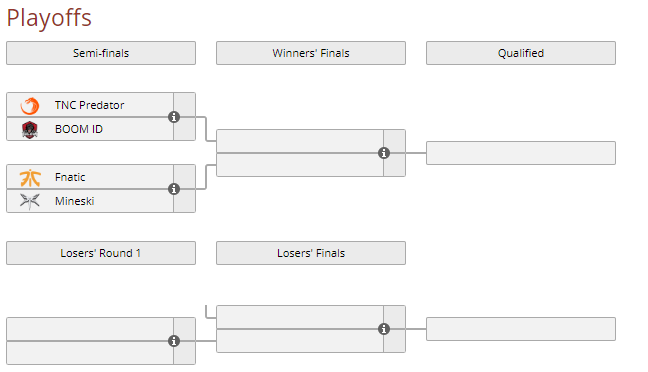 
This leaves the Tigers once again in the same spot they found themselves last time, having to fight it out in the Minor Qualifiers. BOOM ID have their work cut out for them as they take on a dominant TNC while iceiceice and pieliedie both square off against their former teams when Mineski take on Fnatic.