CQ Major SEA Regionals : Fnatic through to the finals after taking down Tigers in Group B

Fnatic became the second team to make it to the playoffs, joining Group A’s TNC as they emerged as top seeds in Group B, taking down Tigers 2-1 in the GSL upper bracket. Both teams had little trouble in their opening games, but Fnatic edged out the reigning Minor champions when it came down to the decider.


Fnatic had little trouble against BOOM ID, dismantling them in a quick series 2-0 to move onto the winner's matchup. Abed’s dominant performance in game 1 on the TA sealed the deal for BOOM ID who could never get their hands on him after a flyer of a start. Despite the obvious laning weakness against Razor, Abed was some given some early help from Jabz and he made use of it beautifully, finishing the game with 16 kills and 0 deaths to his name. In game 2, the Indonesian side, BOOM ID found themselves outmatched in the laning phase, and heroes like Abed’s Alchemist had little trouble in building a massive gold lead for his team. MP’s Drow would finish the game with a scoreline of 16 and 0 this time as Fnatic found the quick 2-0.


InYourDream shows off on the meta carries


In the other opening series, Tigers took on the Malaysian side, WG.Unity but were barely made to break a sweat in the series. InYourDream playing heroes like the LD and the Naga Siren, put on a masterclass while AhJit took on the mid role, playing an extremely important part in the wins. AhJit’s ability to control the tempo of the game on heroes like the Lina and the PUck was instrumental in creating space for InYourDream, who showed up with his items and cleaned up whatever was left of the WG.Unity lineup. 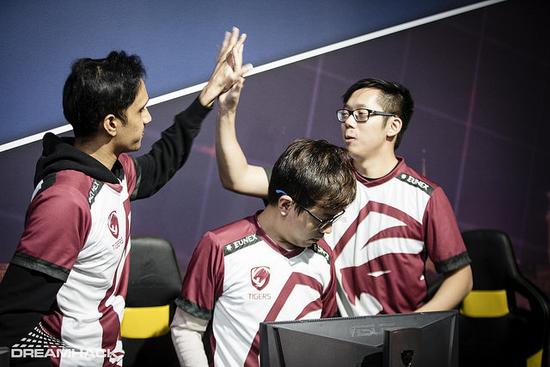 
Once again, MP’s LD gave Fnatic the early lead in the series as he looked simply unstoppable, having yet to die in the days play. Coupled with iceiceice’s initiations on the Axe, InYourDream’s PA was unable to play the fights without overcommitting and Fnatic took full advantage everytime an engagement broke out. In the end, MP’s farm was too much for the Tigers to contend with as they called the gg. A smart draft from them in game 2 however, rendered much of Fnatic useless as the in your face, high armour, high HP cores like the Timbersaw and Abaddon found easy pickings against a Drow and Lina. The game never looked like it was going Fnatic’s way who were very single target heavy.

In game 3, Fnatic brought out their infamous Io+Gyro combo, as they won their lane heavily and started making early rotations putting tons of pressure on the cores of Tigers. Fnatic played a fast pace, high intensity game and with the low cooldown on their ultimates, they never stopped pressuring, building themselves up a significant lead. While Tigers found a couple of good teamfights based off of their AOE control and damage, the lead was simply too much for Fnatic as they closed out the game.

With this Fnatic move onto the playoffs stage while the Tigers still have one more shot at it.