Eternal Envy’s Complexity, faced a shock loss at the hands of Timado’s Infamous, in the lower bracket, eliminating the NA side from the minor. CoL had previously beaten the SA mixed stack in the group stage quite convincingly but fell short in the playoffs. Elsewhere, Na’Vi had little trouble in dispatching Vega Squadron, making them 4-0 against their former player Dendi in this tournament.


Infamous failed to draft against CoL’s second pick Phoenix in game 1, allowing the NA side to take easy team fights and a 40 minute win. The Magnus pick gave Complexity enough aoe to shut down Timado’s PL as Skem had a great time with the Empower on his MK.

In game 2, it seemed as if Complexity had the upper hand with Skem’s PA powered by Sneykings’s Magnus going to town on infamous in the early and mid game. The SEA carry player would end the game with 33 kills out of the total 56 his team had in the game. However, some smart itemization from Timado, allowed him to survive the PA’s burst. CoL were heavily reliant on Skem’s PA for damage with all their other players building heavily towards utility and the Aeon Disk pickup on TB allowed Infamous to win a decisive team fight and force a third game.

The South American side closed out the series in game 3, playing a heavy teamfight and control based lineup as once again, Complexity found their support pair rendered usesless. And the heavy single target focus on their cores made it hard for them to take teamfights and Infamous were able to win the game off the back of their advantage.

And @Natusvincere beat @VegaSquadron 2-0 again! They push on and are now in the Top 4 of #DHDreamLeague as we say goodbye to the players in Vega. #DHDreamLeague pic.twitter.com/SkosTKu7Q8

In the other lower bracket matchup of the day, CIS side Na’Vi found themselves a much easier win over Vega Squadron. The EU stack who are playing with a standin in the form of Dendi haven’t looked their best in the competition and for the second time got absolutely dismantled by a new and improved Na’Vi roster. Na’Vi pretty much outplayed Vega every step of the way, with Crystallize’s Clinkz going to town in game 1. Vega’s decision to force the Gyro+Io strat two games in a row was quite appalling as Na’Vi seemed more than prepared to take them on. In game 2 it was Magical who did Vega in, with a dominating performance on his Storm Spirit. 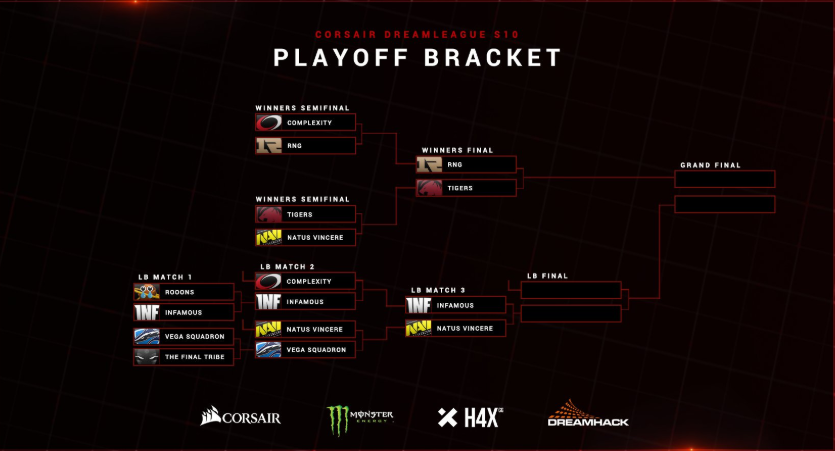