The ESL Pro League Season 8 – Oceania Qualifier continued on with a lot many matches being played on 23rd and 24th October.

Grayhound defeated Chiefs ESC quite convincingly with a series score of ‘2-0’. They defeated the ZOWIE  eXTREMESLAND 2018 – Australian representatives on Mirage and Inferno with scores of ‘16-4’ and ‘16-10’, respectively.

Grayhound breezed past Chiefs without facing any hassle or competition, making their way to the Upper Bracket  Finals. 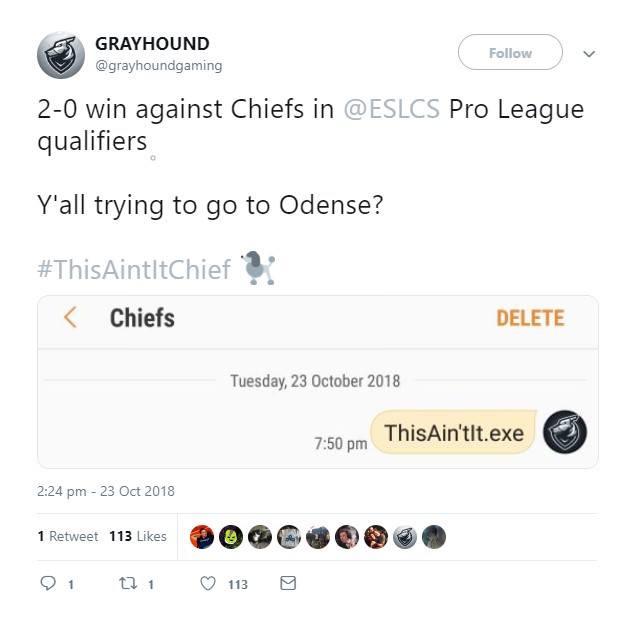 Tainted Minds lost to ORDER, who took the victory with a score of ‘2-1’.

The first match was won by ORDER after a long fought, double-overtime victory on Inferno. Tainted Minds were definitely stepping up to the competition, as they took the second match held on Nuke with a score of ‘16-14’.

But it was the last match on Cache where ORDER showed the difference in both skill and experience that set the two teams apart. They shook Tainted Minds by defeating them with a score of ‘16-2’, completely shutting them down and dominating them with some godlike plays that took them by surprise and definitely left them in a state of awe. 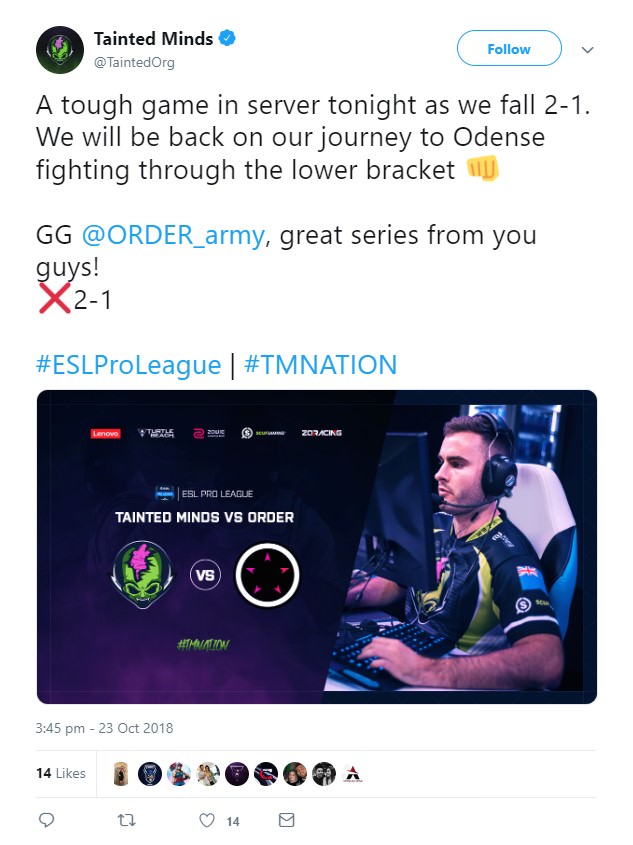 The first two eliminators of the qualifier took place with Paradox Gaming and Madlikewizards reaching an end of their journey after going down to Legacy Esports and Ground Zero, respectively.

Paradox Gamers fought hard to extend their stay within the qualifier but Legacy Esports proved to be quite a challenging opponent as they beat them in the decider match taking place on Mirage with a score of ‘16-6’. 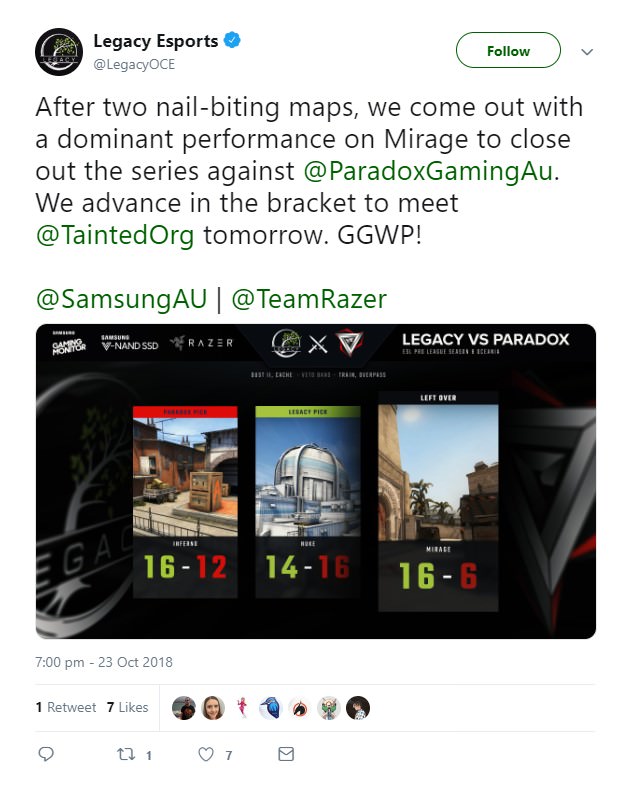 Madlikewizards, on the other hand, stood no chance against Ground Zero, who showed no mercy to their opponents beating them on Cache and Train with scores of ‘16-5’ and ‘16-4’, respectively. 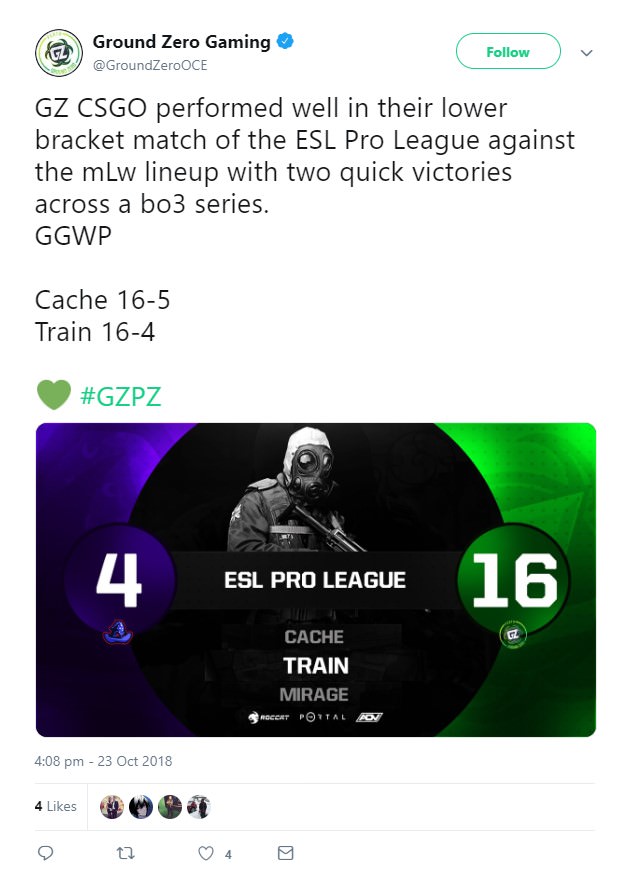 A fierce game of CS took place between arguably the two best Australian teams, as Grayhound went up against ORDER in a BO3 series.

The first match between the two teams was set up on Cache where ORDER faced stiff competition but managed to edge past their adversaries, taking the win with a score of ‘16-14’. The following match was played on Dust 2, witnessing a huge blow for ORDER, standing no chance against a dominating Grayhound, who won with the scoreboard reading '16-2'.

The decider took place on Mirage where the match went into overtime. ORDER was successful in breaking  Grayhound’s astounding momentum that they had gained during the previous match but Grayhound still proved to be quite a force to reckon with. ORDER found it hard to close the match the first time around but was successful in their second attempt, as they won the match with a score of ‘19-17’. 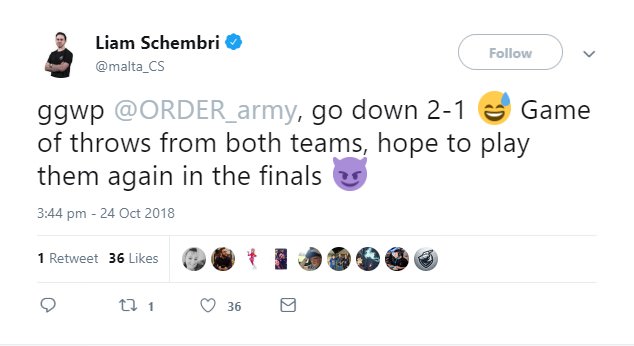 With the win, ORDER moves onto the Grand Finals with a one-match advantage over their TBD opponents, while Grayhound drops down to the Lower Bracket hoping for another chance to face off against ORDER.

Tainted Minds faced off against Legacy Esports and it did not turn out to be much of a threat to them as they beat Legacy quite comfortably in two straight matches taking place on Mirage and Inferno with scores of ‘16-10’ and ‘16-9’, respectively. 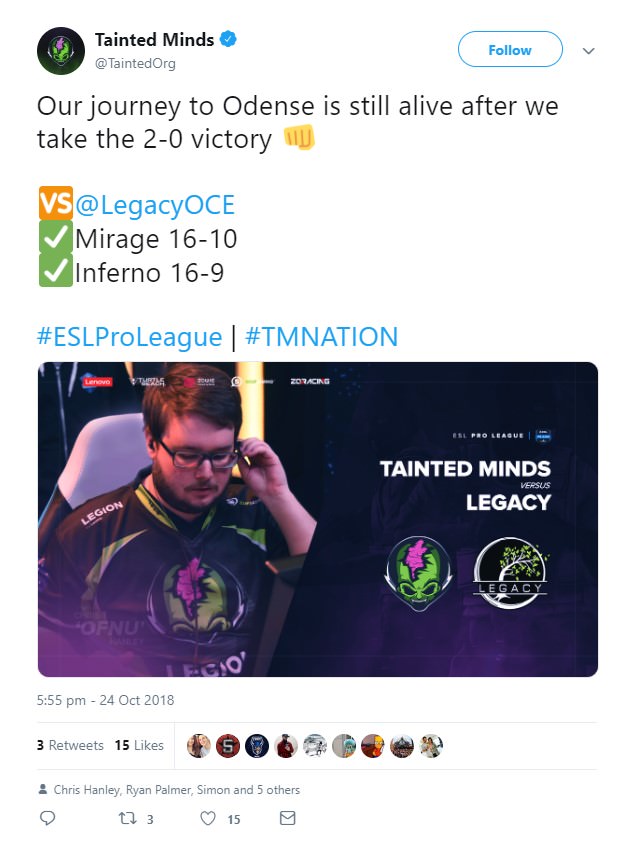 Chiefs, on the other hand, were up against Ground Zero and although most had predicted this to be easy tidings for the Australian top shots, the game still went down to a decider. Chiefs took the first match on Cache with a score of ‘16-12’ which was followed by Ground Zero making a comeback on Mirage with the scoreboard reading ‘16-7’ as they made easy work of their opponents.

The decider took place on Train where Chiefs played cautiously throughout the entire match and came out on top as victors with a score of ‘16-11’.

With this, we complete half of the ESL Pro League 8 - Oceanic Qualifier with the other half left to be played out in the coming days. Stay tuned as we bring you more updates on and about the Pro League.