With ESL announcing that 5 teams have decided to drop out from ESL One: Mumbai, fans were understandably disappointed with a few requesting refunds after their favourite teams/players announced that they weren’t attending the event.

Chaos Esports Club, Ninjas in Pyjamas, Gambit Esports and The Alliance made statements via social media, detailing the circumstances which lead them to drop out of ESL One: Mumbai and apologized to all their fans who were hoping to catch them in action in Mumbai.

Chaos Esports Club were the first to release a statement on their website stating that:

“Unfortunately our team will not be participating in ESL One Mumbai. While we consider the event a great opportunity to compete in front of a passionate and under-served community, the dense dota circuit has caught up with us. At this time we consider it better to pass on an event in order to focus on practice, team chemistry, and avoiding burn out. We take full responsibility for the misset expectations for the fans planning to attend and spectate the event. Our hope is that with better planning and awareness of our players fatigue we can avoid this situation going forward.”

Ninjas in Pyjamas and Gambit Esports soon followed, stating that they had to understandably prioritize their participation in the OGA Dotapit Minor. 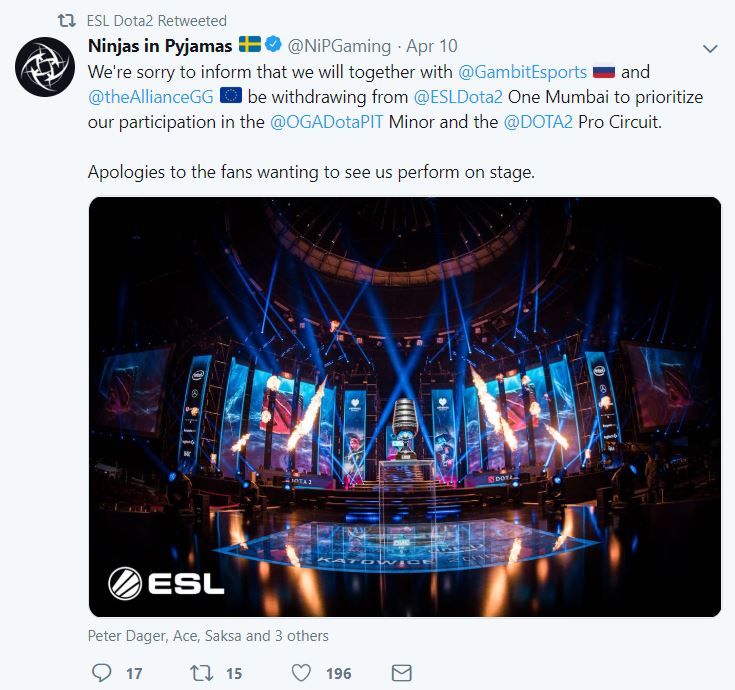 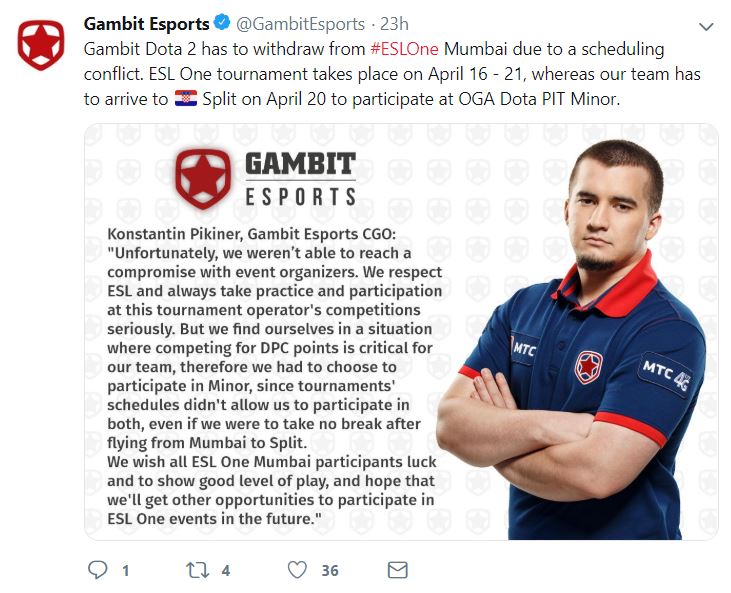 Finally, Alliance wrote a heartfelt apology on their website, with Alliance’s CEO and Dota coach Jonathan “Loda” Berg stating that:

“I am truly sad that we had to pull out of ESL Mumbai. We tried to resolve the situation by suggesting a lot of solutions but we ultimately couldn’t come to an agreement that worked for both organizers.

As the minor is crucial in our goal of reaching The International this year we have to choose going to compete in the Minor at Split, Croatia.

We send our deepest apologies to all fans in India, our entire Dota division was looking forward to competing in Mumbai and meeting everyone there. We hope to be able to attend another event at India soon again.”

Meanwhile, J.Storm hasn’t yet made any statement detailing why they decided to drop out of ESL One: Mumbai, other than this tweet.

Unfortunately we are one of the teams that had to drop out of ESL Mumbai.

Please follow us as we head to WSOE and try to take the throne this weekend! https://t.co/yQpAUj2y4V


Redeye talks about ESL One: Mumbai

The host of ESL One: Mumbai, Paul "Redeye" Chaloner has also made a video detailing why ESL: One Mumbai will still be a special event, despite 5 teams dropping out from the tournament; 5 days before the tournament kicks off.