Earlier yesterday, in a European pub game involving several 7K+ MMR players, OG’s offlaner Sébastien "Ceb" Debs allegedly made xenophobic comments against Russian players on his team. His teammate, screenshotted his remarks and made a thread on Reddit detailing the events of the game.

He opinionated that Ceb was one of the most recognizable and respected players in the world, who “cannot indulge in surges of emotions in solo mmr games”. He goes on to detail the instances of Ceb’s bad-mannered behaviour in the match (ID: 4776898273).

He stated that Ceb’s flaming started when the TI winner picked up the Aegis of Immortal on his Necrophos, instead of the player who was playing Storm Spirit. He said “I warned him that I really needed the Aegis, because this is a pretty hard game for the storm. But he simply silently picks up the aegis.”

Post this, the player claims that he told Ceb:

Well, then I will not go anywhere until I get an orchid."After that, I began to farm, and Ceb died 2 times alone on the bot, when he saw enemies coming on our vision. I told him: “Well played, Ceb, good implementation of Aegis”.

To which Ceb responded with these unsavoury comments:

The community responded to these statements with many claiming that these comments were racist and similar to the ones made by Kuku earlier this year. 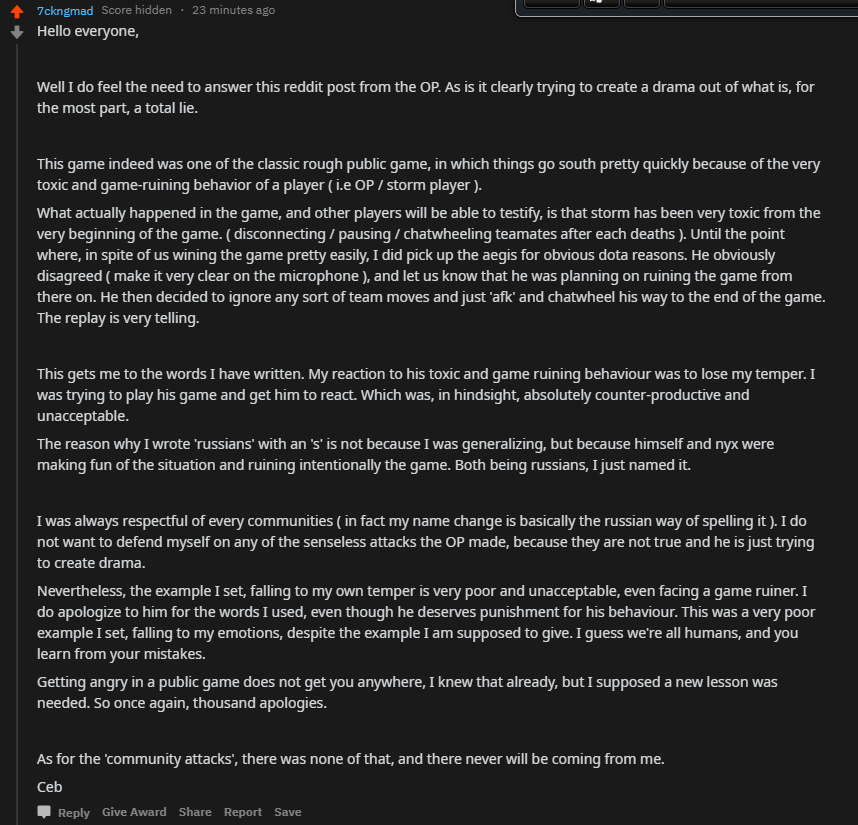 Following all this, Solo has posted on his personal VK page stating that:

I would like to share my personal opinion on the situation that happened with Ceb yesterday and his apology that followed up a bit later.

Russian whores who would sell their mothers for MMR. That’s not the kind of stuff you say even if you get frustrated. Schizophrenic animals from Russia. Third world dogs.

You simply can’t say these things no matter what caused them. I am proud to be Russian and your words leave me speechless. You’re not some young player who can do careless stuff because he might not understand the consequences. You’ve been in this game since the very start, you’ve earned a lot of respect and it makes the situation even worse.

If the best players in the world do those things, what do we expect from our community? Kuku made his mistake and was banned for a far less insulting stuff, so if we really want to get rid of this racist shit in our game, I think it’s time for Valve to act. I was on vacation when Mind Control pulled his Hitler shit last year and did not react properly, so now we have another example. I’ve done my mistakes in the past and took my punishment, but kept loyal to the game. I think I’ve earned the right to speak on behalf of our community and demand justice. Otherwise it’s all hypocrisy and double standards.

I won’t be participating at the upcoming Epicenter Major that will be played in my home country unless Valve openly speaks about this case and ensures consistency and transparency when it comes to treating racism in our game.