B.O.O.T-d[S] take on Beyond Esports today in the finals of PLG Grand Slam 2018 - India & SEA Qualifier

The PLG Grand Slam 2018 – India & SEA Qualifier which started a couple of days back on 4th November will be concluding today with the Grand Finals due to take place at 05:30 PM (IST) between B.O.O.T-d[S] and Beyond Esports.

Three known Indian teams also participated in the qualifier at a chance to recreate something similar to what  OpTic India had done during the Toyota Master Bangkok 2018 – SEA Qualifier. Following are the Indian teams that were part of the Qualifier:

Team Invictus started their journey by defeating Team Gornkawin in the Ro-64, taking them down on Inferno but failed to go beyond the Ro-32 after going down against TP-CSGO, who put up an impressive performance and qualified further into the tournament.

2ez Gaming also found success in the Ro-64 as they defeated Team Soifong on Cache without facing much trouble. The next round was held against Team Bigetron on Nuke, it was a valiant effort by the Indian squad but this time around victory flirted right past their triggers as Bigetron clutched some really crucial rounds in the middle to walk away as the winners.

Entity Gaming faltered in the same round as the two teams mentioned above. They won against Team RYoung on Dust 2 and moved on to the Ro-32, where defeat struck them in the form of Team R5CS.

None of the Indian Teams found success this time around faltering at the Ro-32. More was expected from 2ez Gaming, especially after their incredible run against ViCi Gaming in the currently ongoing ESL Pro League – Asia Finals.

This is how the Qualifier has proceeded so far with the finals between B.O.O.T-d[S] and Beyond Esports to be played out today at 05:30 PM (IST). 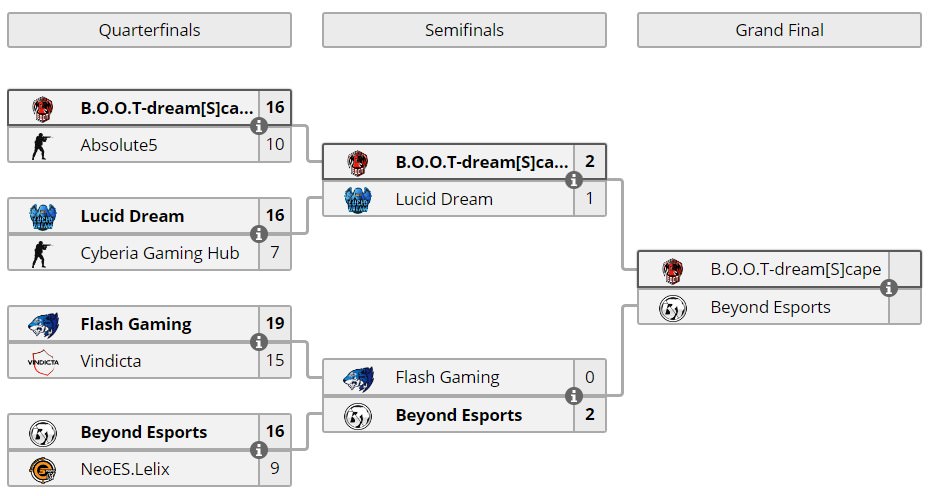 B.O.O.T-d[S] has shown consistent performance on their way to the Grand Finals even managing to go up against one of the toughest teams participating in the Qualifier, Lucid Dream in the semifinals and besting them in an action-packed series which went down to the wire.

Beyond Esports are playing way better than expected, toppling Flash Gaming without breaking a sweat and look confident enough to cause some serious damage in the Finale as well.

The Grand Finale between B.O.O.T-d[S] and Beyond Esports will be streamed on