Best All-Star teams we can build from each region

The All-Star match at DAC 2018, albeit a bit stale, posed us with an interesting question, which region would have the strongest team if they decided to pile up their rosters into one entity. And what would be those rosters? Here’s a list of the Dream teams we could build from each region.

I’ve only included players who are currently active. This list also doesn’t take into account their nationality. It just considers what region the player plays in. For example, Jacky "EternaLEnVy" Mao is considered as an SEA player, even though he is a Canadian national. 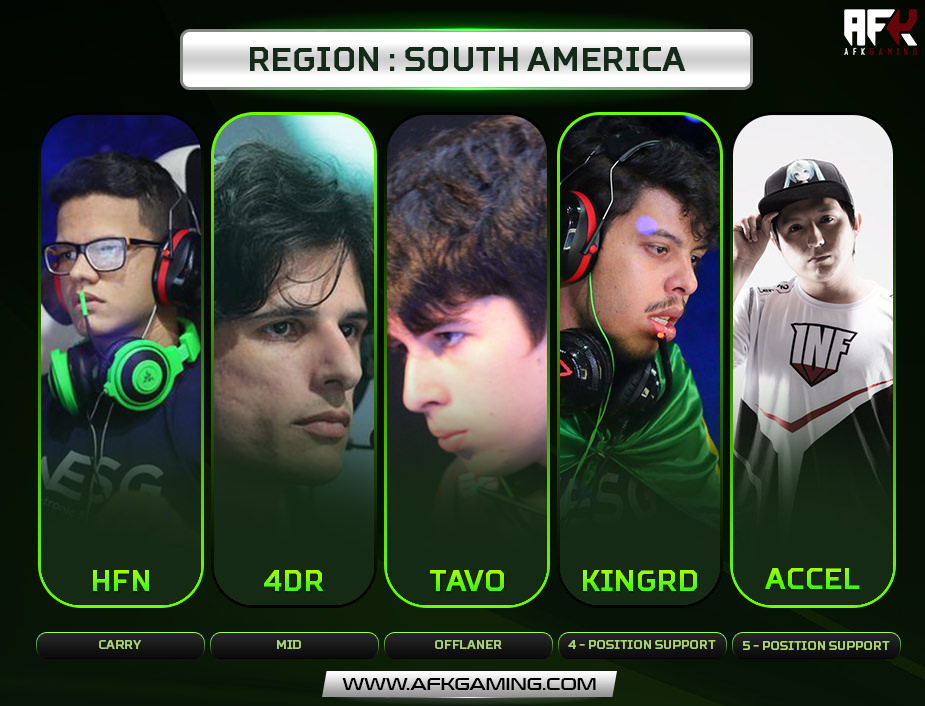 Let’s start with the region that has zero points in the Dota 2 Pro Circuit. South America was expected to do great things after SG – Esports’ performance at the Kiev Major. However, bar a few upsets, the region has largely seemed to have flatlined. But, there are a few talented players in that region who have stood above the rest.

hFn is one of the best upcoming carries in the world with his versatility and his controlled aggressive play. 4DR is one of the better midlaners to have come out of the region. The tavo – Kingd combo is quite scary to play against for any team as they just seem to synergize so well together. Accel is the best 5 position player in the region by quite a margin, his impact with zero farm just can’t be understated. 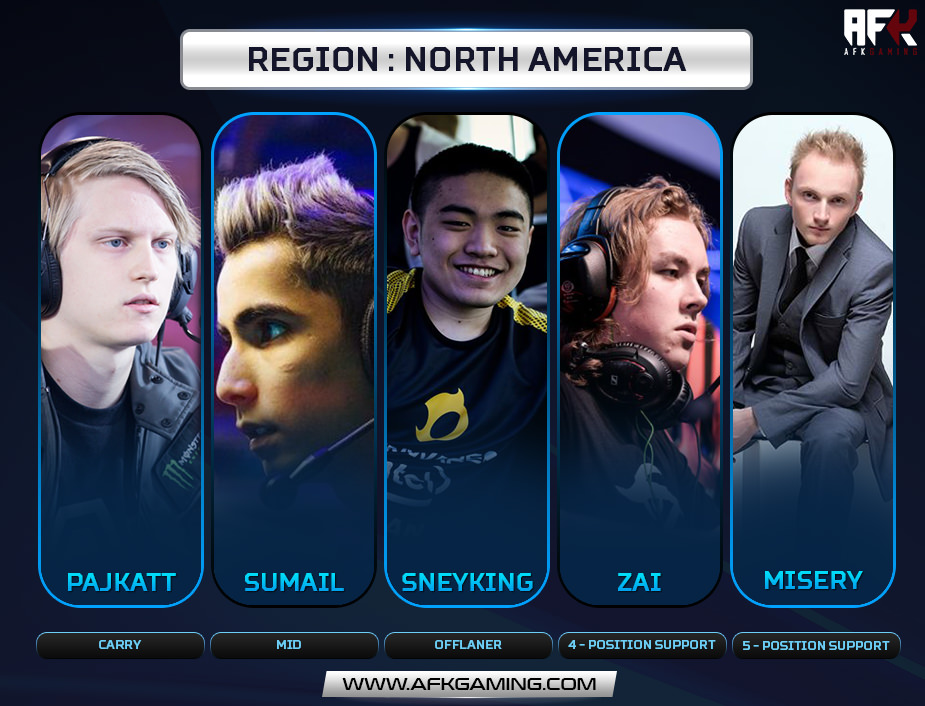 Something that would have been unthinkable last season. NA was blessed with a plethora of talent with highly-skilled individual players and a ton of teams who could take on the best teams in the world and still have the chance to come out on top. Evil Geniuses, Team NP, Complexity, Digital Chaos, Planet Odd were just a few of the squads that made NA one of the most stacked regions in the world.

However, this season has been quite a shocker. The NA region has fallen off a cliff, the teams from the region are quite weak. And even the best teams in the region cannot compete with the best in the world. Evil Geniuses and Optic Gaming’s abysmal performances in the Dota 2 Asia Championships 2018 stand testament to that fact.

However, the talent pool still remains as good as or even better than last season.

Pajkatt has completely reinvented his carry play, becoming a beast no matter what hero he is put on.

You might disagree with me saying that SumaiL now plays in the offlane, that is true. But he still plays the 2-position role, just not in the mid.

The offlane role was definitely one of the harder ones. NA has lacked a star offlaner, ever since Universe left the scene. Players like Fear, 33, Moo have been quite decent; but they haven't really showcased the highest-tier of offlane play. Sneyking, on the other hand, has been one of the biggest factors in VGJ.Storm emerging as a rising force in the scene. Despite his limited heropool, he is currently the best that NA has to offer.

zai was the standout player for Optic Gaming over the last couple of months, he has been showcasing his sheer brilliance in his 4-position role, with innovative and high-impact position 4 heroes like Pangolier, Dark Willow, etc. He is by far the best support in the region.

Evil Geniuses, this season, looked like they lacked a sense of direction and were just winning games by sheer individual brilliance, rather than outdrafting or outplaying their opponents as a team. That was when they brought in Misery, who to his credit has improved EG on this front while still maintaining a high-level of play. EG's immediate future depends on Misery and how much he can extract from his team. 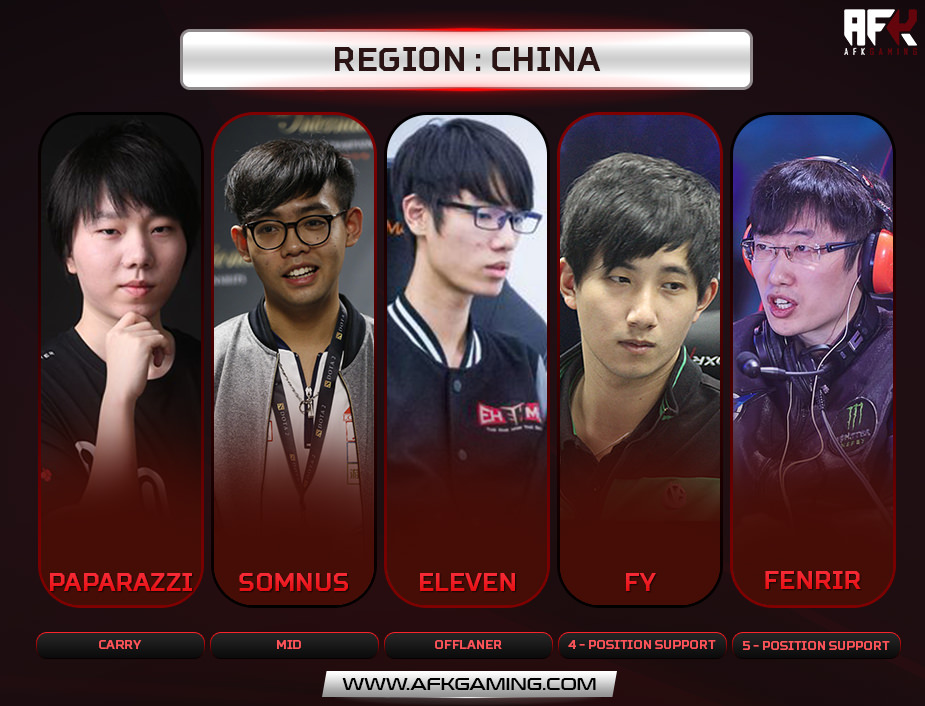 China easily has the most well-developed infrastructure for upcoming players, hence it is no surprise to see them have the strongest tier 2, tier 3 teams. While the region also has a plethora of Tier 1 teams, none of them can lay claim to being the best in the world. Hence there are literally dozens of Chinese players who can lay claim to being the best players in their position. But here are the best, current Dota 2 players from the country.

With the victory at the 1v1 tournament, Paparazzi just proved that he is still, technically, the most mechanically skilled player in the world. But that’s not his only claim to the throne. His performance at the Dota 2 Asia Championships was outstanding. He is easily the best carry in China.

No one from China has kept the level of consistency that Maybe has. He has been in the Top 3 Chinese mids conversation ever since the time he broke into the scene around TI5. While his team has undergone a host of changes, he continues to excel in his role.

The definition of a high risk-high reward player, eLeVeN is a no-brainer as far as Chinese offlaners go. He is easily the best the region has to offer. While he might have some fiftEE|fiftEE moments, he more than often pulls it off in clutch situations. No other Chinese offlaner, has come close to his level ever since he emerged into the scene back in 2016.

There is really no other 4-position player with the experience of Fy coupled with his mechanical prowess. He just proved that he is one hell of a captain in the recently concluded DAC 2018 leading his team to a 2nd place finish.

The yin to Fy’s yan. Fenrir is not only one of the most talented strategists in China, he might be one of the best in the world. Adding to the fact that he was part of one of the most feared 4-5 duos in Dota 2 alongside Fy. There is no reason to pick any other support. 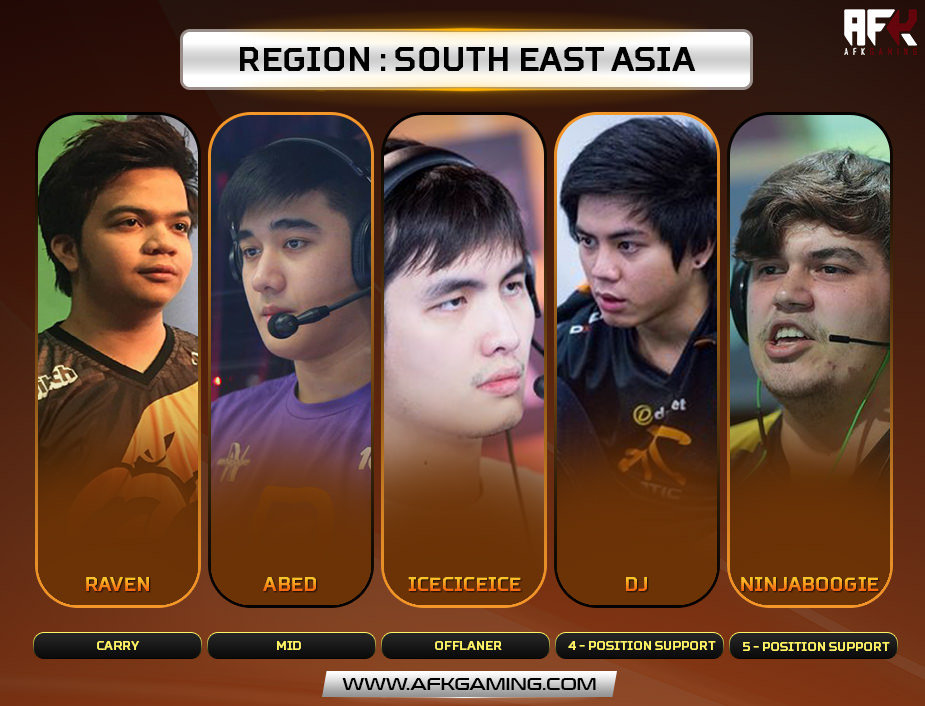 On the back of the recent triumph at the Dota 2 Asia Championships 2018, SEA is now in a really good spot. The talents coming out of the region have been shining all across the world. Indeed SEA houses some of the most mechanically sound players in Dota 2 in it’s three major teams Fnatic, TNC Predator, and Mineski. But who are the best players from these teams?

Raven is quite a no-brainer considering that the other two candidates are Mushi and EternalEnvy. Even though Mushi was an integral part of Mineski’s triumph, one couldn’t help but feel that he could have contributed more in the laning stage. EternalEnvy is way too inconsistent to be put up on this list. Raven, on the other hand, was one of the standout performers for TNC at DAC 2018.

Abed might just lay claim to the title of being the most mechanically skilled player in the world. The first ever 10k MMR player is just so versatile and consistent that it would be a crime to not include the young Filipino on this list.

As an offlaner, iceiceice has established himself as the best in his position, if not the best player in the world. His on-camera personality has made him popular among fans, with his easy going and joking nature and the fact that he doesn’t shy away from using taunts in-game in pro matches. But this is all just a mask to hide his sheer skill level. Iceiceice was so far ahead of his offlane peers at DAC 2018. He won every single one of his lanes, no matter what hero you put him on and what matchup he was put against.

At the end of TI7, DJ was wanted by almost all the teams in the SEA region as well as a few European ones. But he chose to stay back, as the Fnatic organization built a team around him. That is a testament to DJ’s talents as a position 4 player. On his day, he can win matches all on his own and can easily carry the game on the back of his support plays.

I picked ninjaboogie for his warding game alone. The amount of info that he managed to garner with his wards was next only to Solo from VP. And when you are second to a 3-time major champion as well as the captain of the Numero Uno team in the world, you know you are going in the right direction. 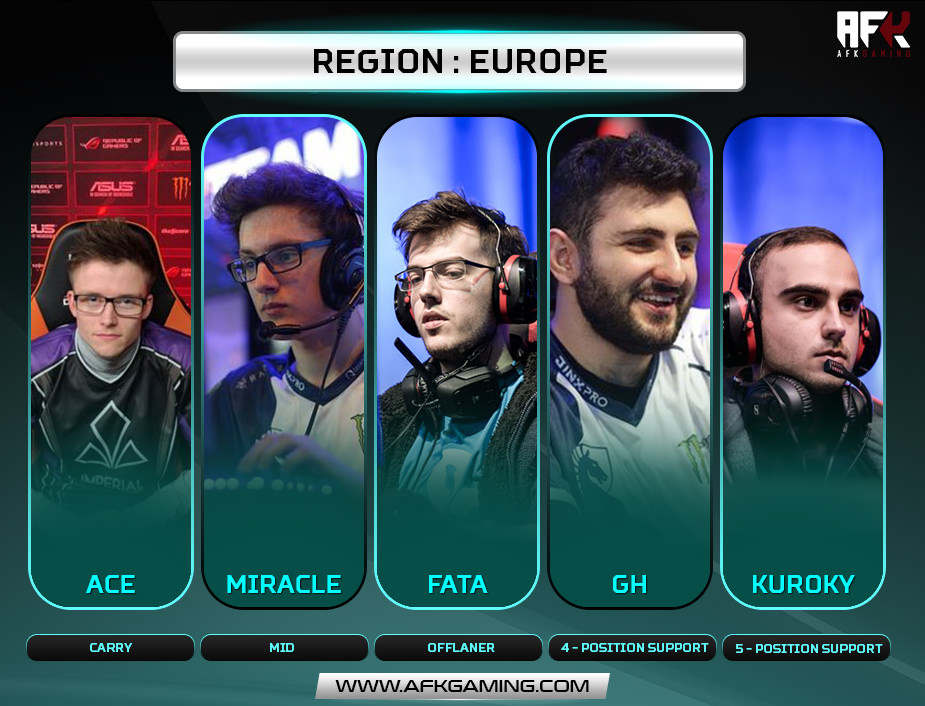 Europe is a weird region. There are two heavy-weights, Team Secret and Team Liquid who can lay claim to being the best team in the world on their day. But after them, the skill level falls off a cliff. A worrying sign indeed, especially after both teams having poor showings at the Dota 2 Asia Championships 2018.
Europe desperately needs to get back on track, a good place to start would be copying the playstyles of the below players.

Both Team Liquid and Team Secret have sacrificial cores in Ace and Matumbaman. Both players receive little to no support from their team, but Ace manages to extract a little bit more from the map. Hence he edges it past Matumbaman in this list.

Many people consider Miracle the world’s best player. And I can see why, his farming patterns, mechanics, decision making are all top notch. There really isn’t anyone who can emulate Miracle or what he can do with heroes like Antimage, Invoker, etc. He is a no-brainer for the Mid position in the European scene.

I know many pros consider MinD_ContRoL the best player in the world. And I do agree to an extent. But I’ve noticed that he only really stands out when he gets sufficient farm, which he only receives thanks to Matumbaman’s sacrifices. Meanwhile, Fata manages to create quite the impact even when he has little to no farm. A mark of a great offlaner. I also rate his synergy with Ace as one of the strong points of Team Secret and hence he gains an entry over MinD_ContRoL  on this list

It is just unfair of how many players from Liquid can be considered the best in the world on their day. GH is yet another one, who constantly receive praise from Pros and Fans alike thanks to the sheer number of plays he pulls off on his heroes. He edges it over YapzOr, since he isn’t as greedy as the latter. I also rate his synergy with Kuro being better than the one between YapzOr and Puppey.

Really? Just watch this video. Kuroky deserves this spot more than Puppey primarily thanks to his versatility as well as his prowes as a captain. 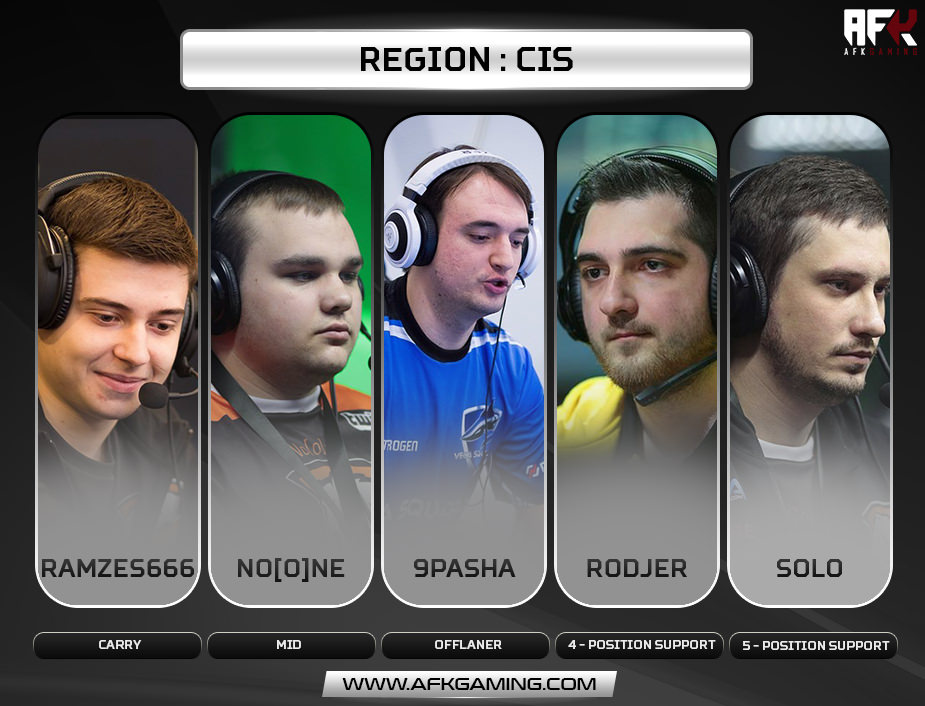 CIS is just like it’s European brethren, only worse. There is really just one World-Class team out there: Virtus.Pro, the rest of the teams are just way too far behind them. Their team reflects that. There is no player from the CIS region who could realistically replace any of their current players and make them better. The only players who might be in with a shot, if someone decides to retire or something, would be Crystalize from Navi and Sonneiko.

So the big question, which of these lineups do you think are the best of the lot? And which players do you think deserve a spot on this list? Let us know by commenting below or tweeting at us @afkgaming
About UsContact UsServicesRSS
DisclaimerAdvertise With UsArchiveEditorial Team