In an event that took place earlier today and has slowly unravelled bit by bit with the day coming to an end, we have some players that strongly stand by the side of the accused while there are those that agree with Nicolaj ‘NiKo’ Jensen.

Astralis who lost to MIBR today at the ongoing ECS Season 6 – Finals, surely was the talk of the global CS:GO community after NiKo pointed fingers at Astralis for using some special type of ‘Smoke Settings’ while referring to the following clip which shows Xyp9x pick off coldzera in a 1v1 clutch through a smoke.

NiKo made a statement where although he did not mention Astralis, it was quite easy to infer that it was directed towards them.

I'm not calling anyone out and they are not the first players which are using it and it's not their fault. I hope @csgo_dev will look into it and try to fix it somehow.

In another statement that was made by NiKo shortly after, he points out to the following being the reason that gives Astralis that cheeky advantage.

Well maybe, but to clarify it, I believe that there are some settings either in CS, Monitor or Nvidia that helps you with this, even though it sounds stupid but I find it unfair :D

Gla1ve was quick to respond to the allegation by dismissing the rumors about using these special graphics settings while also stating the usage of the in-game radar and their game sense.

Btw i saw some people talking about Nvidia settings to look easier thru smokes. I can say for sure that no one from our team would ever use something like that and none of us have any idea what that bug even is. We use our radar and gamesense.

Xyp9x tweeted about the incident claiming to have seen coldzera’s feet on his screen while pointing out to the spectator smoke bug, which has been a problem for the CS:GO client since forever.

I have never known of those “nvidia settings” I could see his feet from my screen. Don’t know why the clip doesn’t show it

Super sad that pro players jump to these conclusions. They should know that smokes bugs while spectating after all those years https://t.co/QHfVQSY1sl

Fallen himself defended the unfair allegations against Astralis by talking about the difference in smoke visualization as seen by the player and a spectator.

Astralis played very well, stop the hate on them regarding the smokes, what you see on spectator mode can be different of what a player is seeing on his client. Every csgo client has its “own smoke” spinning on its own it seems. It happens to us too. All good!

Janko Paunovic, MIBR’s coach also sided with what Xyp9x had to say about the whole incident confirming that MIBR has no doubt that Astralis play a fair game. 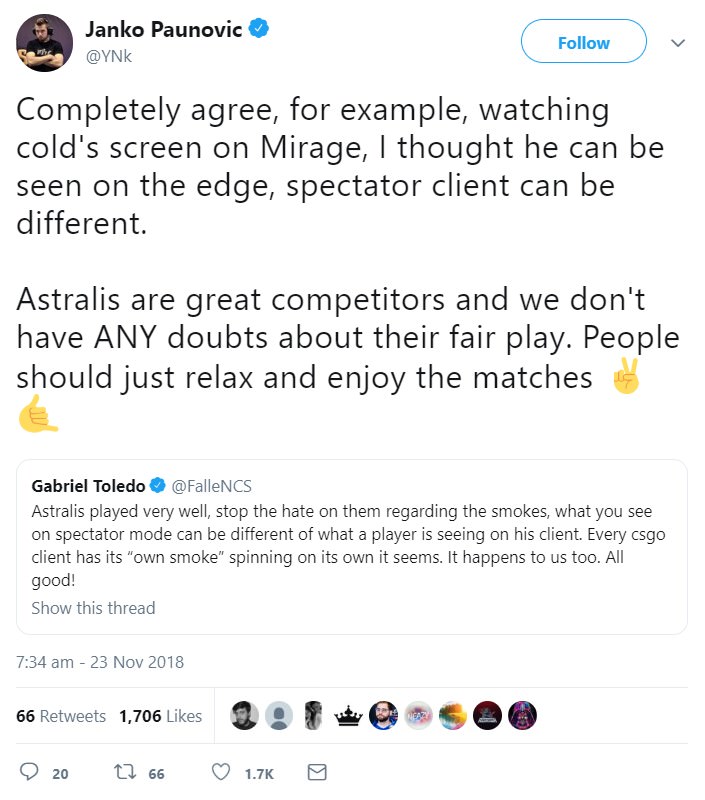 Although it is safe to say that Astralis might have been playing a fair game taking into account that MIBR themselves came to their support while providing enough evidence that it might have been a spectator smoke bug indeed.

There are still some concerns over the use of this special setting that helps teams or players engage their opponents with a slight advantage through a smoke. These concerns have been backed by TACO, who spoke out about the situation with a very obvious tonality to it.

Superman big balls. But i’m gonna help you. Players don’t talk about it but we all know that certain players have been using it for months now. I never thought Astralis was using tho.

The matter which has now subsided could be an eye-opener for many including the CS:GO dev team, to try and figure out a way around both the unfair smoke advantage that players acquire through tweaking certain settings and the spectator smoke bug.