Artifact is inching closer to release

7th, May, 2018
It’s been quite a while since the last Artifact update we put out, but there has been plenty of progress behind the scene of Valve’s latest card game. The game has only received positive reviews from a wide variety of gaming media houses such as PCGamer, IGN, etc. This has only lead to an increased sense of hype amongst Valve, CCG fans and the Dota 2 community who are all optimistic about this game.

With regular updates from a variety of gaming media, we now have a clearer picture of what to expect. So here’s a breakdown of everything we know about Artifact.

First off let’s start with addressing the concerns regarding the payment model that Valve will use for Artifact. No one wants to be paying hundreds of Dollars, Rupees, Ringets, Pesos or whatever for a new deck everytime an expansion drops (cough Hearthstone cough).

Richard Garfield, Artifact’s lead designer, explained that “Common cards will be the most useful ones, they will be the cards that you need to be able to play the game competitively, while rare cards will be there to add a bit of spice to your deck”. He compared it to golf clubs, while an expensive set of clubs will give you an edge if you are evenly matched in skill, the fact is that Tiger Woods would beat you with the cheapest ones. What he was trying to say was that there will be a payment aspect but it will be tailored in a way such that the stronger player will always beat the weaker one no matter how much they spend on the game. 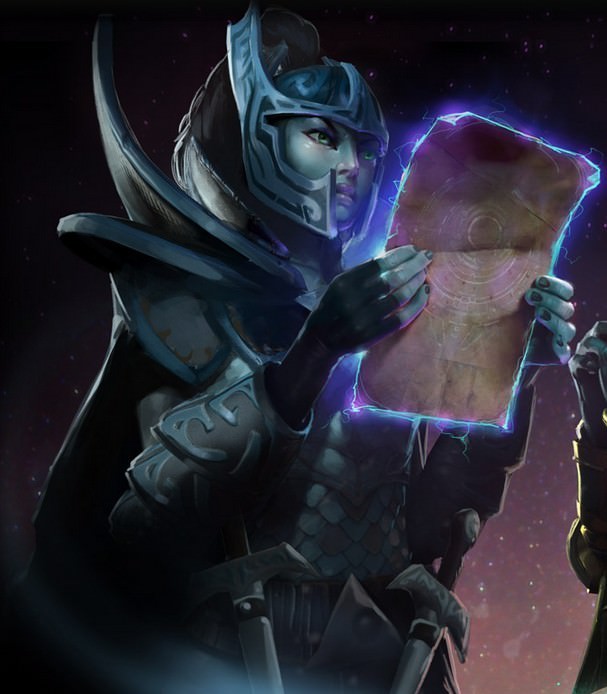 While Artifact is in many ways connected to Dota 2, it appears as though Icefrog hasn’t had any hand in the development of the game. In fact, most of the Dota 2 department has stayed away from the game. However, Steve Jaros – The man behind the lore and setting as the Creative Lead of the Saints Row series, joined Valve recently and has been writing parts of Dota 2 to prepare the Dota 2 community for the Lore of Artifact.

It appears as if Artifact is inside the Dota world, the cards themselves manifest in this world through some sort of unknown magic and we are related to the events that happen within it. All this information was provided to PCGamers via an interview with programmer Jeep Barnett. He says that the first set of cards will explore “a big three-way battle between various factions.” The set will feature Dota’s Bronze Legion , the invading Red Mist, and the Vools (another warrior race whose forest the Bronze Legion has occupied), and will focus on a struggle between the three groups. It looks like our prediction that Artifact would flush out the lore of the Dota world is coming true.

Just like in Dota 2, Heroes will have voice lines as they interact with the world and the characters around them. One tease set of interaction (Between Axe and Legion Commander) was revealed in the same article. When in the same team, Legion Commander will call to Axe saying "with our powers combined we can take on any foe" but when they’re matched against one another she will reference his betrayal.

All the lore in the world wouldn’t save the game if the mechanics are trash, so news of mechanics of the game are very important right now as we currently have little ideas to how the game is played. So many of us are really hyped about the game, but we don’t know if we will enjoy how it plays out. However, we can all sit down and rejoice as it has been revealed that the gameplay will largely be controlled by us and not RNG.

Richard Garfield explained that while he does believe RNG is good for card games, it has to be done properly. It needs to be at the player’s command such that it allows the game to be played out different everytime it’s loaded up but it also needs to help separate the higher skilled players from their lower skilled peers.

The Card limits were also discussed. Unlike other games like Hearthstone, and Gwent, there is no limit to the number of cards you can have on a board or your hand. In fact, Jeep Barnett says, that a developer apparently put 20,000 cards on his side of the board to see what would happen. They left it to play overnight and just 8 hours after the game started, his twenty thousand strong board won.

We know that each Deck contains 5 Heroes. And of those 5, three of them are placed from the start of the game. Your 4th Hero will be deployable on turn 2 and your 5th on turn 5. We even got to see some cool mechanics in the Euro Gamer playtest.

When your Hero dies, you need to wait for them to respawn (just like Dota 2). While this is old news we got some new additional info. When a hero dies, he goes to the fountain – which is essentially a queue for your heroes who are not the board to return. All heroes will take 1 whole turn in the fountain before they can be redeployed.

We also see a quality of life update with regards to Hero stats - if you hover over unit stats, you can see how they got to the current scores we see. This should help anyone who is new to the CCG genre and is overwhelmed by the sheer amount of information on the screen.

We know that Artifact will allow, in-game spending just like Dota. But until now we didn’t have much info about the shopping mechanics. We learned a lot about the shops and items in the latest gameplay footage thanks to Eurogamers. The shop consists of three sections. One for consumables one for any random item in the shop and a final section for cards you bring with, called ‘Item Deck’.

The rightmost item in the shop will be one of four consumables: Potion of Knowledge, Town Portal Scroll, and Healing Salve. We don’t know what the other card will be, perhaps it will be a fountain flask.

The leftmost part of the shop is the random item. This can be any of the types: Weapon, Armour, Health or consumables and represent some of the RNG in Artifact.

The final/middle slot is called the Item Deck. For those unfamiliar with Card Games, the Item Deck is something you create before the game and bring with you. It must contain at least 9 items, but like everything else in the game, it has no maximum.

Items might seem like an unnecessary complication. But one of the developers, Icefrog Bruno Carlucci summed it perfectly in an interview to RockPaperShotgun: “All colors have specific powers and weaknesses, and the item deck sort of circumvents that”. It provides a balance and will be an integral part of Artifact.

Jeep Barnett explained to RockPaperShotgun that each hero has a premier spell that comes with them. Three of these premier cards are included with your deck. So 15 cards in your deck are already set in the very beginning, as each of your five heroes will bring three copies of their premier spell with them. Bruno further explained that the hero cards and the premier cards are a package deal, saying that “If you really like Thunder God’s Wrath but you don’t like Zeus, you don’t get that option. That’s part of the trade-off that you’re making when including a hero.”

All in all, this game is very intense and is slowly inching towards completion. Artifact is a card game capable of challenging the entirety of the genre when it releases. The fact that the game will have RNG, but mostly relies on skill to separate the best from the rest along puts it head and shoulders above every other card game out there. This is why Artifact is so appealing for fans of Collectible Card Game genre.

It has plenty of elements that made Dota 2 so successful. With the immersive lore, and the renewed take on gameplay amongst many other things. Artifact looks like it’s all set to live up to the hype of being Valve’s first game in 8 years.
About UsContact UsServicesRSS
DisclaimerAdvertise With UsArchiveEditorial Team