Artifact 101: Things to know before you play the game

However, the game could seem quite complicated and might be hard to learn for the more casual audience. So here’s a brief guide to help new players understand Artifact and how it is meant to be played.

Just like Dota 2, there are two sides (Radiant and Dire) with three separate lanes. Each lane has a tower that starts with 40 health and 3 mana. Whenever a tower is destroyed, an Ancient bursts from the ground, creating a new target for the opponent. Each Ancient has 80 health.

The objective of the game is to either destroy the enemy Ancient or to destroy a total of two enemy towers across two different lanes. Achieving either of these objectives results in a win for the attacking player.

Artifact is played on 3 lanes, so you are basically playing 3 minigames which are connected to each other. Each of the three lanes has its own mana resource pool, which controls the cards you can play at any given stage of the game. Each lane's mana pool begins at three and increases by one point as each turn plays out. The cards dealt to you, are playable in all 3 lanes. So the choice of how you distribute your resources resides with you.

This means that balancing and calculating how to expend resources is a necessity to win the game. Over-committing on one lane could mean that while you might be winning on that one, you could be losing on the other two. Getting heroes to “teleport” from one lane to another is possible in several ways, but it is not always viable so you normally don’t want to have 3 of them stuck in the same lane.

Before you hop into a match you will be required to do something elementary in all Collectible Card Games: Deckbuilding.

Artifact cards, with the exception of Items, are divided into four colours.

To build a deck, first, you have to choose 5 heroes. Each hero comes with 3 copies of a single unique card that you must play if you want the hero included. This brings a dynamic where you sometimes play a great hero with a horrible card attached and hope you just don’t draw it much, or on the other side of the spectrum, you play hero with weak stats just for the amazing card he comes with, as there is no other way to get these cards to your deck other than playing the hero.

The Main Deck has 40 cards, so once you have your heroes ready, 15 slots are already filled, and you get to decide what your other 25 cards will be from the whole collection.

In addition to the main deck, you will also have to choose your Item Deck which consists of 9 Items. These are not cards that you can draw from your deck, but you will be able to buy them in a shop during the game, and then equip them on your heroes to make them stronger.

Start of the Game: 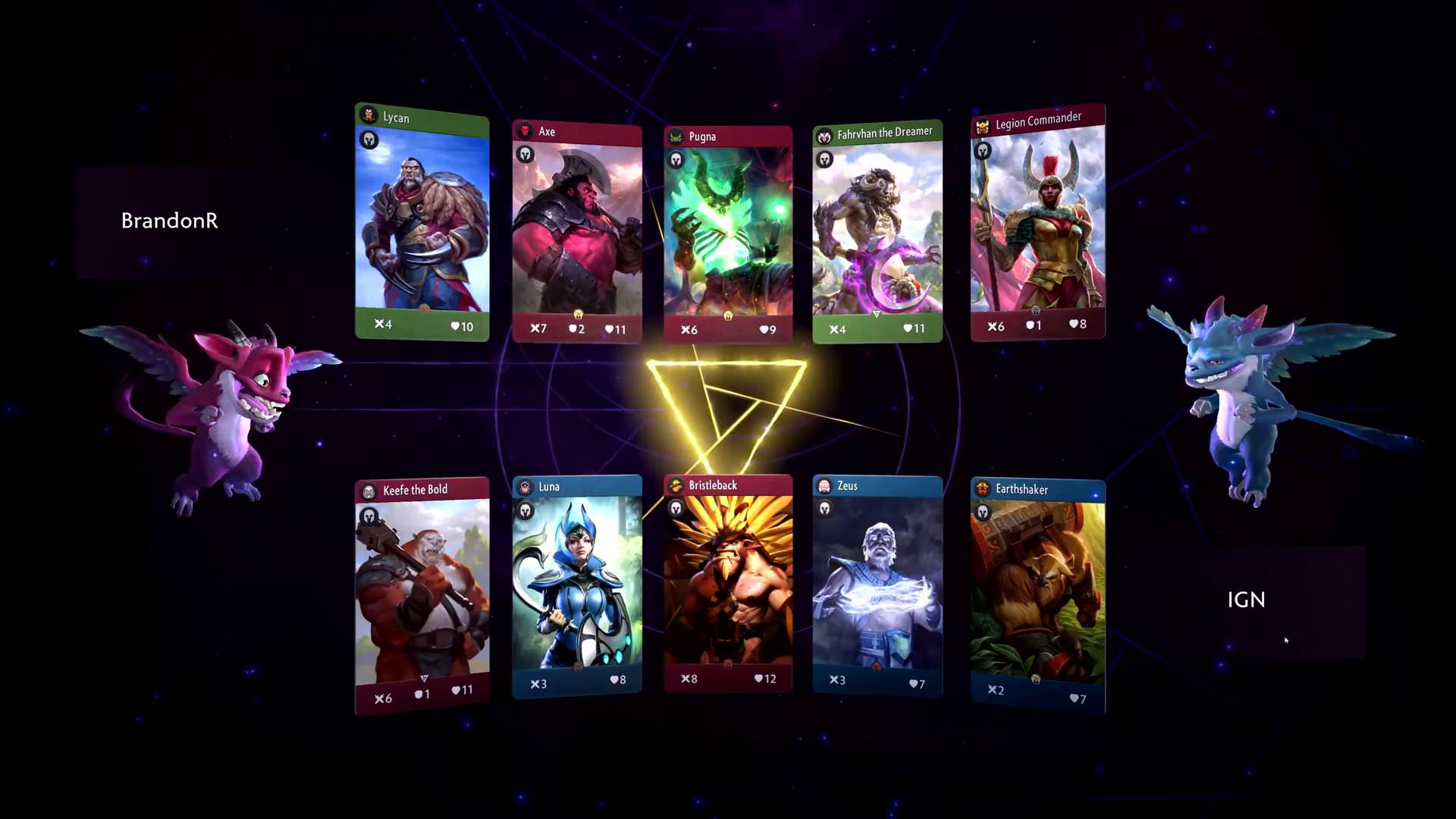 Although you choose these 3 heroes that you start with, they will be randomly placed on the battlefield, one to each of the 3 lanes. 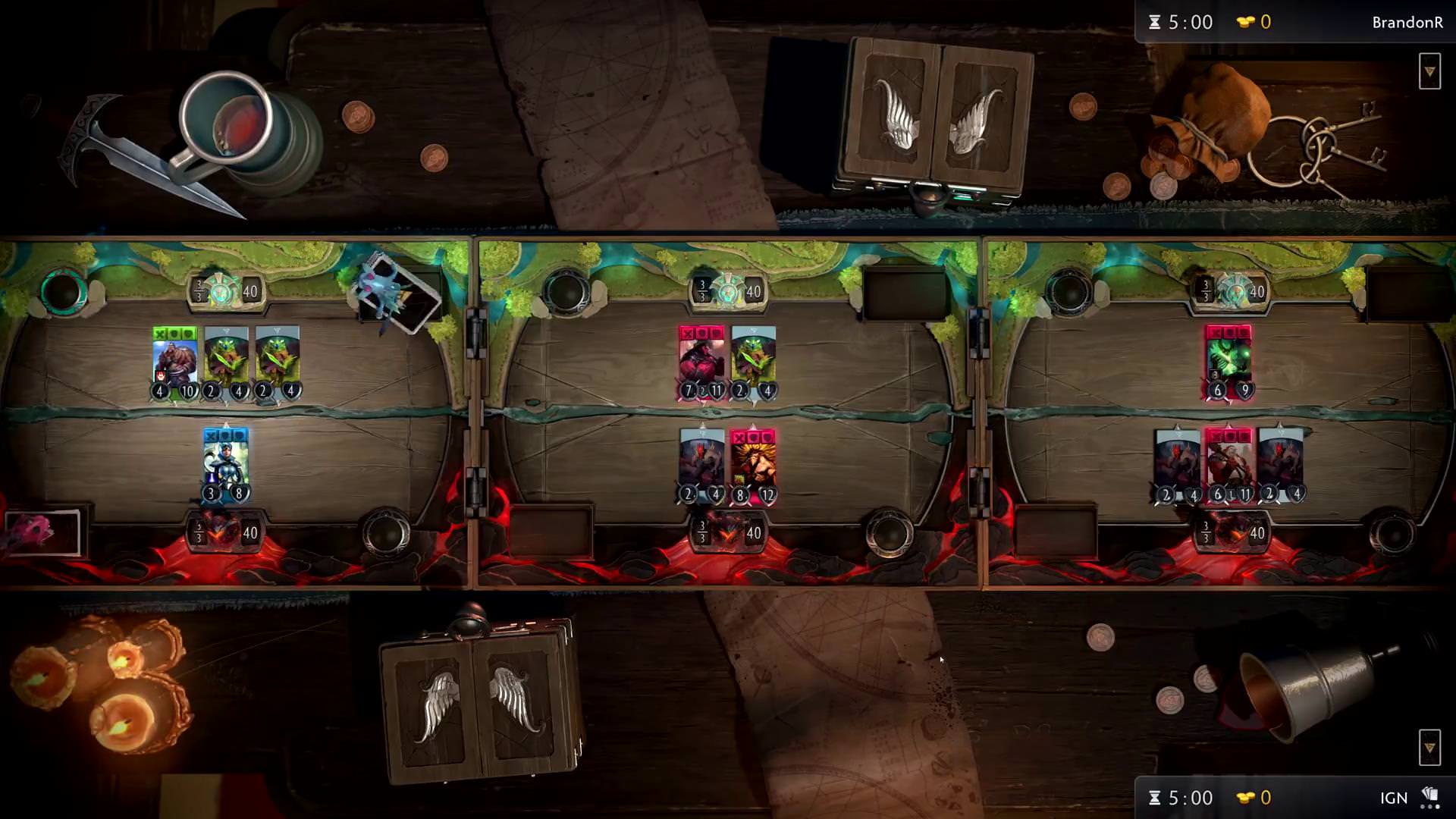 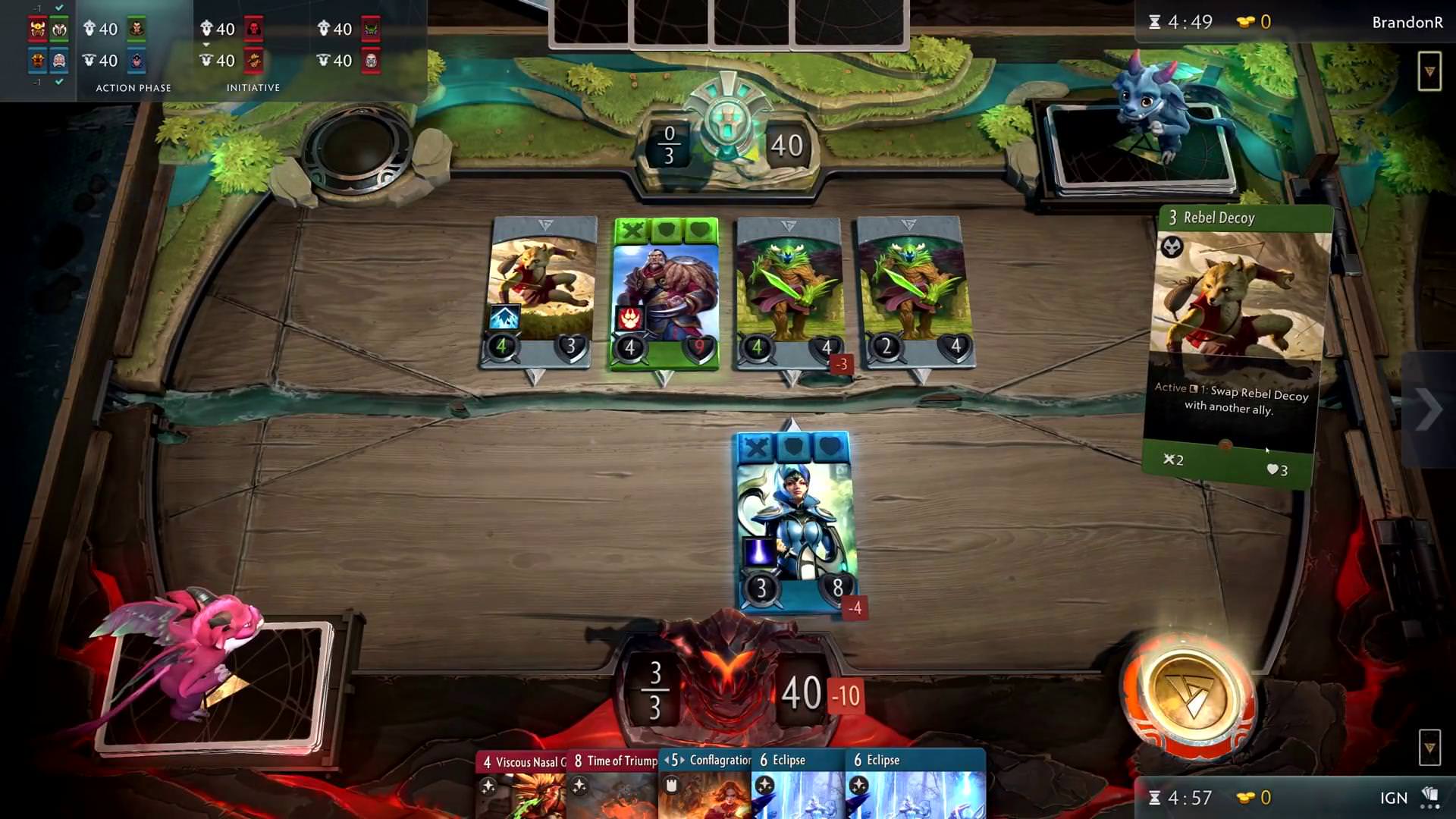 When the game finally starts, the game zooms in on the first lane and the starting player can do exactly one action or pass the turn.

Actions you can do:

Unlike Dota2 cards are divided and grouped by colours. Any coloured spell can only be used if a hero with that particular colour is placed on that lane. If you have no hero in a certain lane, you will not be able to cast any spells there.

Once you make your move, the priority passes to the opponent and so he can make his move. Then it passes back to you, then to him…and so on until both players decide to not do anything and just pass the priority, after which the combat will be activated.

The player that activates the combat will be playing second in the next lane. Or to say it differently, if you pass the priority and your opponent “accepts” by activating combat, you will be rewarded by playing first in the next lane. Playing first on a lane is strong as you get to be the first player that will kill opposing heroes with some spell so that he won’t be able to do anything. Getting to play first in the right turn in the right time is a big part of the game.

Once both players decided to do nothing in lane, combat starts in that lane. Every unit fights with the unit right across it, all heroes, creatures and improvements that can attack, do so. Once all damage has been resolved, the Action Phase begins in the next lane. Once all three lanes have been passed on, the game advances to the shopping phase.

If your hero dies somehow in this turn, they take a 1 turn break and then go back to the battlefield similar to your fourth and fifth hero who arrives later. 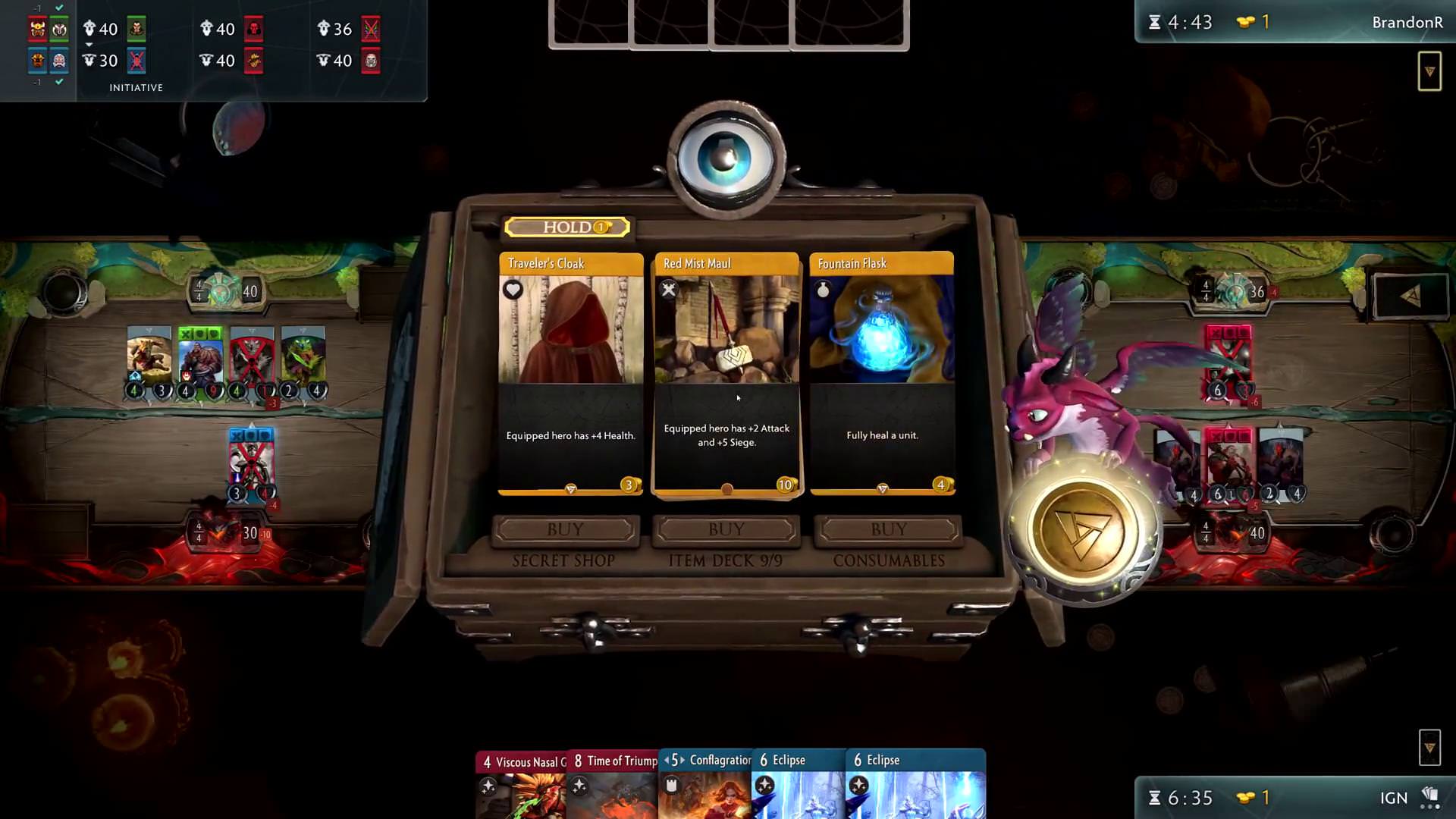 There are 3 parts you can see here.

When you buy an item from Item Deck, another one appears under, unless you just bought the last of them (you usually have 9 items in your item deck, although you can include more). However, Secret Shop and Consumables offer only one item every round, and nothing else appears under it if you buy item from these.

After the end of the shopping phase, a round ends and so each player will now have two creeps randomly assigned to each lane. Then, both players secretly assign any hero ready for deployment to any lane. Heroes are ready for deployment if they are dead and their respawn time has elapsed, or they have not yet to be deployed and the correct turn for them to enter has occurred.

Players then draw 2 cards and the hero deployment phase starts over once again. This repeats every turn until one player loses 2 towers

These are the basics of how to actually get through a game of Artifact. But there’s plenty more to it. We know that right now, it looks like an overload of information, but it is quite easy to understand once you start playing the game.

Just like Dota 2, the easiest way to actually learn the aspects of the game and not to get overwhelmed with the details is to simply hop into the game and play some random matches when the game officially launches!

All images sourced from IGN