An update from the world of Indian Esports - May 2017

11th, May, 2017
Two Indian tournaments with substantial prize pools have been on in full swing over the course of the last two weeks and we bring to you a brief update on them. Both the tournaments have both Counter Strike : Global Offensive and Dota 2 and most of the major Indian sides (as well as a few foreign ones) have been a part of the action in both.

The Cobx Indian Esport Championship is the inaugral event by Cobx, a relatively new organization with big plans with regards to Indian esports. This tournament has been held only for Indian participants and is hosted online. The tournament kicked off with a huge Open Qualifier for both Dota 2 and CS:GO, with over 150 teams playing Dota 2 and another 112 in Counter Strike. The teams fought it out in a ruthless single elimination bracket till only 8 remained. From here on the format was pretty simple – a double elimination bracket with a bo3 format. A very comprehensive format for the 8 teams who made it, as bo3’s are generally hard to come by in online tournaments.

Dota 2: Aggressive 5 were the most recognizable team of the 8, but a surprise 2-0 loss to Go Figure Red, in the winners bracket finals knocked them down to the lower brackets. They await one of teams from Buriza, Team Dynamite and my personal favorites, Baap Ko Marega who are still fighting it out. The Bangalore boys comprising of Archmage, Milky and co wait in the grand finals. 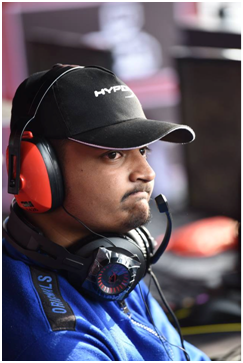 CS:GO : The Counter Strike brackets are full of recognizable names, and this has already led to some high profile encounters. Entity have more or less cruised through the brackets and now find themselves in the winners bracket finals against Team Wolf, who’ve had a much harder route, no doubt. A very commendable performance from them, having knocked down both Team Brutality and SemperX to the lower brackets. However the biggest talking point of the brackets was Shooting Monkeys’ shock win over seasoned veterans, Team Brutality. They took a pretty convincing win over Brutality winning the series 2-1 including a 16-3 win on cobblestone.

ESL India Premiership -  Summer Season – 1st Cycle
The ESL India Premiership is back for its second season with a completely revamped format. The entire season has three different phases which culminate to 3 different LANs. For a detailed breakdown of the format, check out the official website. The road to the Mumbai LAN has just begun and we are set for a small relegation/promotion process with teams from lower leagues jumping up and those from higher leagues getting knocked down.
Dota 2: Entity Esports are sitting comfortably on top of the Masters table after the first cycle. They obliterated all of the opposition and will now pick up a winner’s check of 10k INR. Meanwhile, Go Figure Red, who are looking strong across all competitions, will be in the Masters League for the second cycle after making it to the top the Challengers League. Team Relax, XRG and Kuroko No Doto will be the 3 teams who will have to fight it out for the last slot in the Masters. 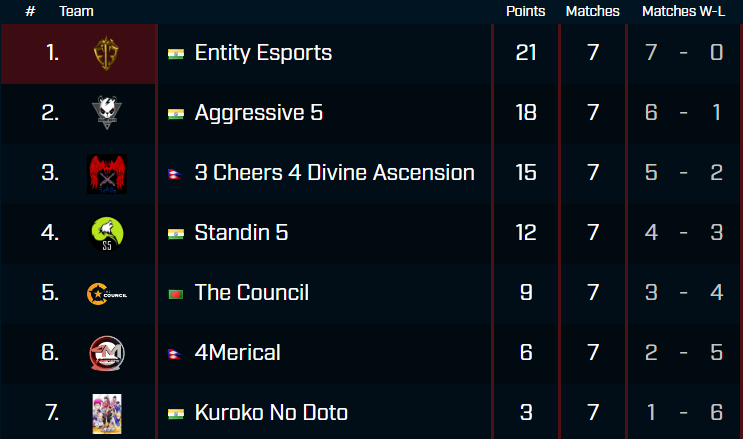 Image credits:www.pro.eslgaming.com/india
CS:GO : The Counter Strike Masters League had a very interesting ending as 5 teams ended up with the same score line (3 wins and 4 losses). It then boiled down to round difference and Team Brutality found themselves on the shorter end along with Elements. They will be facing 2ezGaming in a for a slot in the Masters, in the next cycle. Kolkata based JMD Gaming topped the group and have qualified for the Masters League. However the Challenger was not devoid of drama as a last day forfeit by Gooutfits and the fact that Xtreme Lungiz had their results nullified means that Snrlx's Blitz Gaming will have to fight again in the next cycle despite initially topping the groups.

Not been the best month for Brutality or D2D

Last year’s champions, Risky Gaming had a splendid time in the first cycle picking up 7 wins in as many games and boasting a 61 round difference across their games. Team Dare2Dream looks uncharacteristically out of shape with a somewhat lackluster performance in the Masters League and an even more disappointing one in Cobx, where they couldn’t even get past the open qualifier stage.
No major updates from Ucypher and Nazara Games, both of whom have made no real announcements after announcing their big plans earlier this year.
For details about when, where and how to follow the ESL India Premiership and the Cobx Indian Esports Championship, click HERE
About UsContact UsServicesRSS
DisclaimerAdvertise With UsArchiveEditorial Team