ESL One Mumbai has truly been a landmark event for Indian esports, one that has opened the doors to many new possibilities and dreams and it was different in almost all senses compared to any esport event that we have seen in the country before. Already an established name globally, ESL One Mumbai was the 14th event in a span of almost 5 years for the ESL One IP. Having spanned across 9 cities and 5 countries, it was the 3rd ESL One event in Asia and of course the first one in India.

The expectations from the event were already high as everyone is used to a certain standard when it comes to production online as well as on-stage for an ESL One event. However, the event was still the first of its kind in India so there were some concerns as well. Let’s see how the event performed, what the high points were and where we could have seen improvement.

We will be using the same review metrics as we did for the COBX Masters. To understand the basics of how it works, read our previous article here.


Having done so many events and so many titles, no one expected any production difficulties on stage or on stream. And ESL didn’t disappoint; there were little to no difficulties and the only two major one I can recall is the sound for some of the casters bugging out a few times and one very brief internet outage in the production area.

Both talent and content were top notch, and received praise from the entire community. Big shoutout to Shaneomad for conceptualizing and executing some everlasting pieces that brought out the best of India and Dota 2 combined. All the talent were pretty much tier 1 and even newer faces like Basskip and Danog received praises for their work at ESL One Mumbai. The decision to have the talent wear traditional Indian wear on Day 2 also added a unique flavour to the event.

Delays were almost non-existent and most games started on time. To be fair, the high score in terms of production is almost expected since it was, after all, an ESL One event. 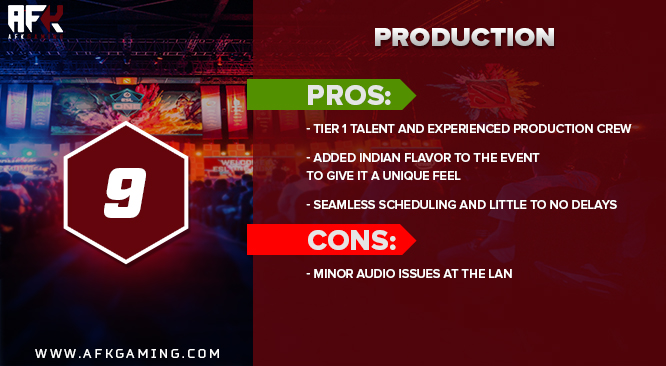 
Everything from the announcement to the match updates were handled with due diligence and promptly. There weren’t any major issues on this front either and it's fair to say, that the content coming out on the various handles was responsible for creating a decent bit of hype around the event. There could have been more efforts to market the event on the ground in an attempt to capture the wider gaming audience however it's safe to say that most Indian Dota fans were aware and incentivized to attend well enough. 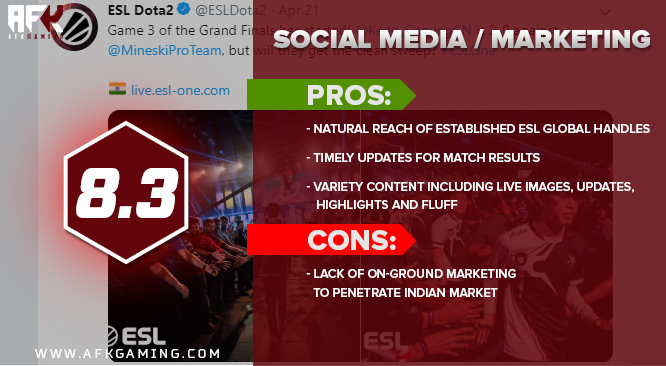 If you did attend the LAN, chances are that you would have found it to be quite the experience, especially if you haven’t attended a LAN of that stature before. From signing sessions to hype crowd interactions with Slacks and Eri, there was something in it for everyone. There were 3 sponsor booths outside as well where activities were happening throughout the day. 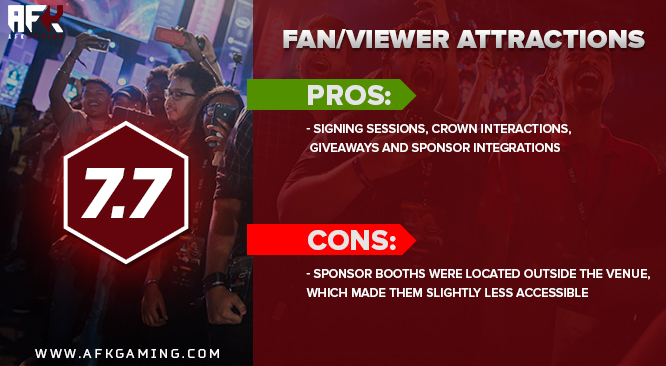 
NSCI Dome is one of the most premier venues to have been used for an Indian esports LAN. In terms of the setup, it looked really immersive, with multiple big screens which made viewing easy, no matter where you were seated. However, one thing to note is that the rank seatings were far more comfortable than the floor seats, despite being priced at a much lower cost. However, floor seating did allow viewers more access to talent and players. The second tier of floor seating had the least value by far as they were neither as comfortable as the ranks nor did they have access like the premium floor tickets.

There were some concerns regarding ticketing and the fact that people were incentivized to attend the event, however, we were not able to to find any conclusive evidence to prove the same. We tried to approach the ticketing booth as discreetly as possible and tell them that we were from 'the experimental hub' (in accordance with the screenshots going around) but we were told that we either had to show them a ticket QR code or purchase one on the spot to be allowed entry.

Choice of food and beverages had very subjective ratings by different reviewers in our survey and the variance is quite high. However, we have factored it into the overall rating for this parameter. Restrooms were slightly old and worn out but it wasn't too much of an issue since there were quite a few and it never got crowded. The location itself was also pretty nice since it was right on the sea face. 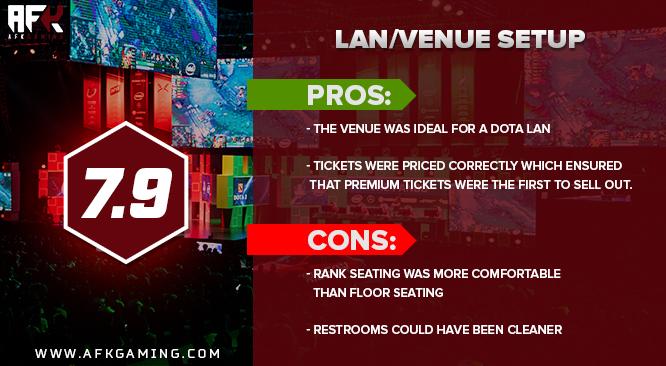 
While India has had a few infamous incidents with regards to upholding the integrity of esports competitions, few expected any real issues at the event itself. Most of the teams and players have played in DPC events and TIs, which leaves little room for any doubt.

The 8 team format saw 2 GSL groups heading into a double elimination playoff. Lately, there has been a discussion of switching up the groups in the final match of the groups to ensure more diverse matchups. However, ESL stuck to GSL but tried to avoid repeat matchups as much as possible in the playoffs. 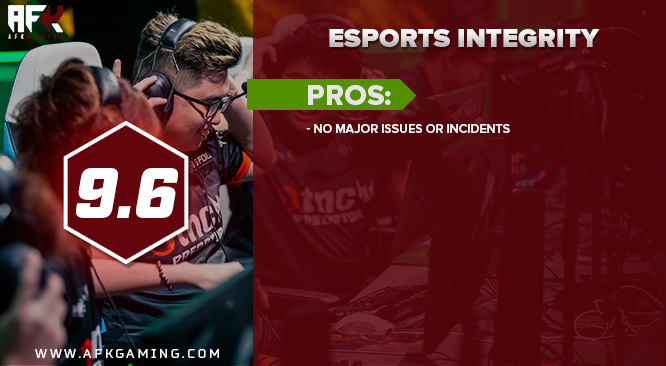 
In all fairness, its unrealistic to expect other Indian tournaments and first-time TOs to meet the expectations set by ESL One Mumbai. The sheer budget, experience and stature of the event outscales many other local ones. However, above all things, the event made it very clear that India is quite ready to serve as an esports destination. From passionate fans to the vocal crowd, talent, players and even the ESL One crew seemed to be quite impressed by what India had to offer. Bear in mind, that the LAN did not have a tier 1 Dota team playing in it and many of the names that were playing, have had mixed results in recent times. While Indian TOs may not have the budgets to implement many of the positives from ESL One Mumbai into their events, they can certainly take a few tips to increase the quality of their own events. 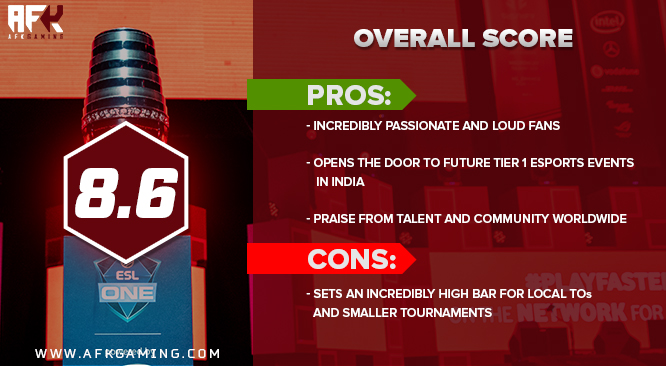 This was by far the best esports event in the country by far, but there is also a sense that it is just the beginning. ESL One Mumbai has put the spotlight on India for sure, and one can only hope that more TOs begin to take notice of the region.

Disclosure: NODWIN Gaming were involved in organizing the tournament and are also clients of and minority investors in AFK Gaming.