A look at the Dota 2 Tournament Formats

14th, Apr, 2018
With the introduction of the Dota 2 Pro Circuit this season, several different organisations have hosted Majors and Minors. 17 tournaments featuring 53,766 DPC points and $8.4 Million in prizemoney, have been played over the span of just 6 months with a lot more yet to come. In such a long season several factors including fatigue, mental stress and other factors may cause a lot of issues for the players. These cannot be avoided.

However, last week, in the middle of the Dota 2 Asia Championships 2018, EG COO: Philip Aram and OG’s captain Tal “Fly” Aizik where some of the personalities who raised concerns about the fact that no two tournaments that they’ve participated in have had the same format. This lack of uniformity is being perceived as detrimental to teams' ability to prepare for and perform at DPC events.


EG Dota hasn't played the same tournament format twice this season. That's a huge issue. Variety is fine, but every LAN is some experimental format. Not a single one has been good enough. You need bo2 RR or GSL groups, an 8 team or more double elim bo3 bracket, and a bo5 GF.


It is about time we stop with the Bo1s. Having a chance to adapt and improve during a series is what helps evolve dota and the tournaments meta game.


This is a problem, we as a community can look into and maybe rectify for the upcoming season.

The fact that Dota 2 has several different organizations hosting majors and minors across different regions; is the main cause of this discrepancy. Each tournament has its own ideologies and funding capabilities, leading to varying tournament lengths and formats.

Each format appears to have some flaws, starting with the unforgiving Single Elimination brackets of several majors such as Boston, Kiev, and Katowice; the unconventional ‘Summit 8’ bracket; and the BO1 lower bracket rounds of Dota 2 Asia Championships 2018 and The International 7.

So what would be the requirements for an ideal format for the players? Here are some recommended parameters :
With all this in mind, we would say that a 16 team Major with a GSL format group stage leading into a double elimination playoff bracket would be the most suitable for the players and the teams. From previous tournaments, we can estimate that this would take at least 9 days to play through.


However, from a tournament organizer’s point of view, this may not always be viable. Our sources say that on average, a day of renting a large sports venue for a major is estimated to cost around $15,000. Adding to this hotels, traveling and other miscellaneous expenses while hosting these events push the expenditure even higher. For some perspective: The good folks at Natural Selection II revealed that they spent around $65,000 for hosting their world championships. But that was quite a modest tournament which doesn't nearly cost as much as hosting a Major Dota 2 event where the organizers ideally have to provide for 16 teams along with their managers/coaches as well as the talent that come to work at the event.

Adding this to the fact that tournament organizers are expected to put up a prizepool of $150,000 for Minors and $500,000 for Majors, it is quite unrealistic to expect tournament organizers to host 9-day events unless they are financially backed by massive institutions like Perfect World or have other streams of revenue such as broadcasting rights from Facebook, massive sponsorships from companies like Mercedes Benz, etc.

Most tournament organizers will not have this luxury and hence will resort to shorter tournaments to reduce operating costs.

Several players like EternalEnvy have suggested that the players would be willing to play more games before the main stage, and would rather get eliminated in a BO3 which is played behind closed doors rather than in a BO1 on the main stage.

Unpopular opinion: teams being eliminated b4 main stage is fine. Rather than playing a bo1 main stage. I hate this band wagon omg post TI4 the most fair format.

While this may seem fair to the players, they must understand that fans who attend the tournaments will want to watch as many series as possible, live. When a tournament says that they’ll only showcase a couple of series on the main stage, it will turn away a number of potential spectators who might opt to watch it from the luxury of their homes which will in-turn have a negative impact on the sponsorship revenue as events need to present a minimum amount of footfall to secure sponsorship deals.

One way to judge this would be to compare viewership figures between different Majors and Minors and use that to infer what the spectators want. For the sake of parity, we will be ignoring The International’s viewership numbers. 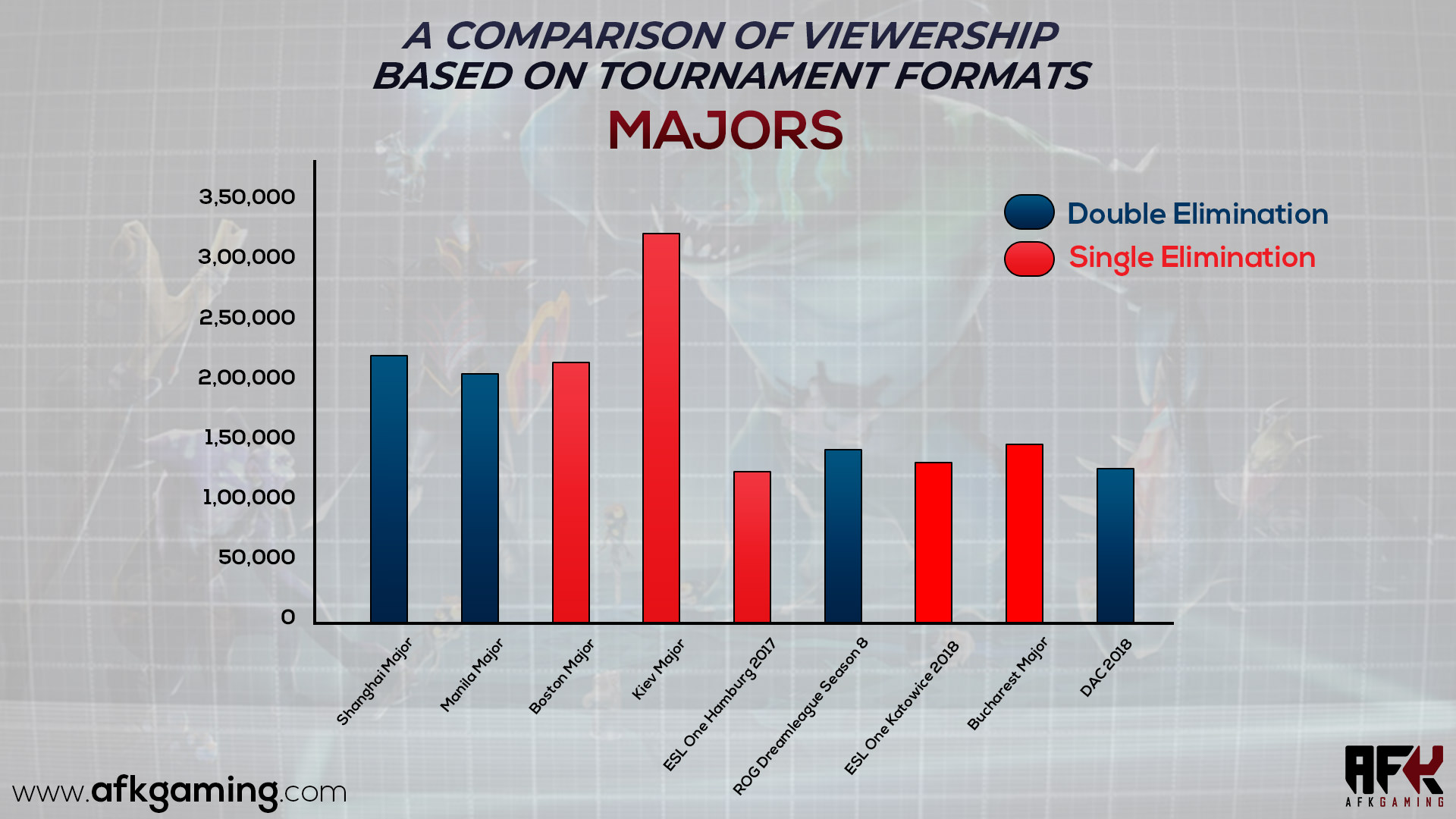 We can see that there is not really much of a change in the average viewership with regards to the formats used in Majors. Spectators will watch tournaments no matter what format is used as long as the world’s best teams are playing at the event. 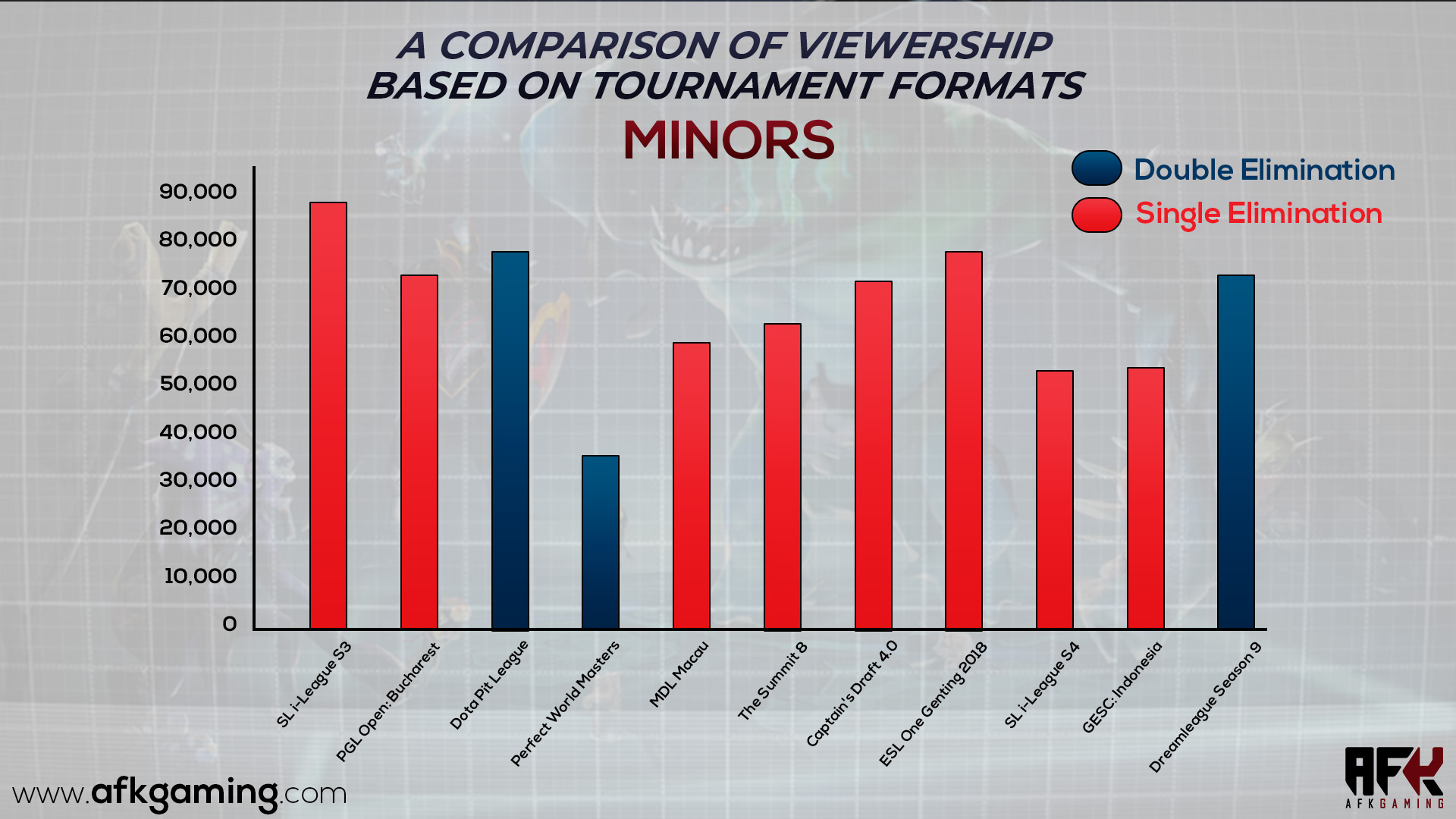 The same goes for the Minors, the viewership numbers just do not seem to be affected by the formatting of the tournament. Which means that online fans will watch the tournament no matter the format/size of the event.


So it's quite clear that fans really aren't put off by the tournament formats no matter how much they complain about it on /r/dota2. They still tune into the Majors and Minors, no matter the format.

With Valve announcing that tournament organizers will be compulsarily required to bring in 16 teams to qualify as a major we expect the financial requirements to host a major to go up even further, which will most likely mean shorter tournaments aka Single elimination brackets. This will probably antagonize teams further.

An obvious fix to this would be the formation of a player's union akin to NBPA which would ideally function as a communication channel between Valve, the Tournament Organizers, and the Players which would in turn help avoid such problems. But, since we don't see that happening any time soon, Should we expect Valve to step in and issue guidelines for tournament formats?

We expect them to not to, considering the fact that the primary reason for the inception of the Dota 2 Pro Circuit was to let organizations like PGL, Epicenter, and Dreamleague flourish and diversify the scene in a way which wouldn’t be possible with the old Major system.


What do you think? Should tournaments start catering a bit more to the players? Or are the organizers right? Is it just a case of sour grapes? Considering that none of the teams in the Top 8 of the DPC points table have complained about the formats.

Which tournament formats do you prefer, as a fan? Let us know by Tweeting at us @afkgaming or by commenting below.
About UsContact UsServicesRSS
DisclaimerAdvertise With UsArchiveEditorial Team