A bloodbath at TI 7 - Execration vs HellRaisers

4th, Aug, 2017
Execration’s opening series of day two started off as nothing short of a massacre!

Game 1 was a brawl fest with 83 combined kills over the course of a 50 minute game, eventually producing a victory in their favour. Hellraisers made their intentions to push mighty clear with Dragon Knight, Pugna and Clockwerk as their cores. Execration responded with heroes like the Void, Earthshaker and the Queen of Pain to hold the fort. Despite a fairly even early / mid game stage, Hellraisers managed to take a lane of barracks against Execration with Dragon Knight (Keyser) and Clockwerk (33) carrying the team on the back of their itemization and talents.

However, 57 minutes in, things went horribly wrong for Hellraisers when a highground attempt at the middle lane was derailed courtesy Raging Potato. Keyser’s DK was holding on to a cheese for a bit longer than necessary in hopes of maximizing its efficiency. Raging Potato (Earthshaker) recognized this and didn’t hesitate to commit an echo slam exclusively for him. This resulted in an untimely death on the DK which snowballed into a team wipe in Execration’s favour. The pinoy squad capitalized on this by barrelling down the middle lane to claim a second lane of rax and soon after winning another skirmish in the Radiant base to close out the game. 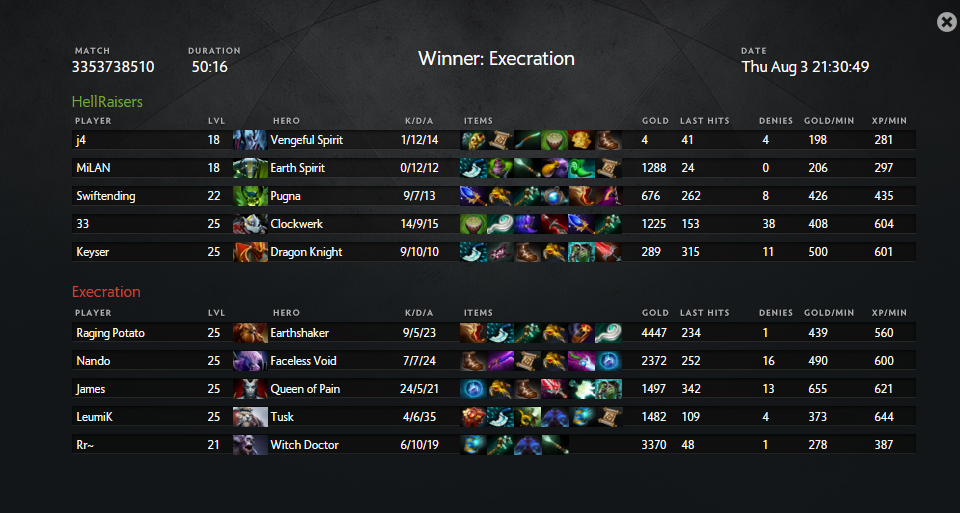 Game 2 saw Execration go up against a much more lategame oriented draft featuring a Sven, Ember Spirit and a Batrider from HellRaisers . Execration drafted a pickoff/ short skirmish oriented lineup with a Queen of Pain, Legion Commander and a Spirit breaker. Razer was picked up as their primary tank and tower pusher. However they chose to throw a curve ball at HellRaisers by laning the James Legion Commander against the Keyser Ember in the midlane and let the Raging Potato QoP solo the safelane against the HellRaisers’ aggressive trilane.

Although Execration won the top lane handily, the midlane was very even and Raging Potato on the Queen of Pain was getting heavily pressure and as a result was getting no CS at all. But to his credit Raging Potato transitioned into the mid game phase and started to make plays around the map catching up to the enemy cores.

However, a couple of botched initiations and some misplays from James (Legion Commander) and LeumiK (Spirit Breaker) coupled with some key rotations from MilaN (NightStalker) lead to Keyser(Ember Spirit) getting a ton of kills in the midlane which let him snowball heavily into the lategame. He continued to build on this momentum and started getting kills left, right and centre.

He made a massive play after Execration killed off 3 HellRaiser heroes and went into the Rosh pit to claim the Aegis. Keyser jumped into the pit at the perfect moment causing chaos along with the Batrider and snatched the Aegis of the Immortal from the jaws of Execration.

They followed this up with a double racks takedown and despite a valiant effort from Raging Potato and company to hold their final racks, Keyser ripped through the entirety of the Pinoy squad, tying the series a 1-1.

Execration is slowly building momentum taking games here and there from top European Teams. Can they keep this up?
About UsContact UsServicesRSS
DisclaimerAdvertise With UsArchiveEditorial Team