6 controversies that shook the SEA scene

Dota and drama have been partners in crime for a long long time and the community thrives on it. The SEA Dota 2 scene is no stranger to controversy either and has had its fair share of learnings with incidents involving teams, players, personalities and tournament organisers. Here's our list of the top 6 controversies that shook the region.

Arrow Gaming and the 322 incident

One of the biggest controversies in Dota 2 was the match-fixing scandal that rocked the entire SEA Dota community in 2014. The players of Arrow Gaming were caught in a case of match-fixing and banned from all Valve events immediately. The ban initially handed out to two of the Malaysian players was eventually extended to all 5 after they were implicated in a match-fixing scandal. Lance, ddz, Mtr, Mozun and xiangzhi are banned to this day.

After admitting to their crimes, ddz would make a statement citing the harsh conditions and lack of money having forced him and his team to do this. However, his initial attempt at covering things up and providing questionable evidence on the Dota 2 subreddit didn’t go down well with Valve or the community. 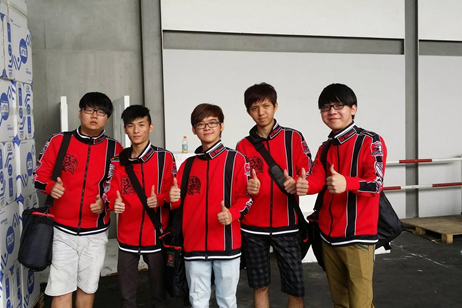 The team was one the best ones in SEA at the time having qualified for TI4. While the some of the players have still been playing under the same banners and tags, the fact that they can’t still play in a Valve event means that their careers are hanging by a thread especially with the DPC season coming into play.

Ohaiyo goes to a pizza party

One of the more recent events to have taken place, this one isn’t so much of a controversy as it was drama. After some initial struggles, EternalEnvy’s Fnatic side were on an upward trajectory with their offlaner Ohaiyo being viewed as a fair contributor toward this. However, after helping his team qualify for ESL One Katowice, Ohaiyo found himself kicked from the team in favour of ex TI champion Universe.

What added salt to his wound is the fact that he learnt that his team had already made the decision to bring in Universe but didn’t tell him till after the qualifiers were over. In an emotional statement, he went on to explain how he was hurt because he felt that the team lied to him and that they ‘used’ him for their own reasons. It also gave rise to the infamous pizza party meme.

While the parties have made up and Ohaiyo has since moved onto LFY, the roster switch which took everyone by surprise has been one of the biggest roster related drama’s that got the entire community talking.

The announcement of DPC 2017-18 was met with joy by most Dota fans across the world and in SEA it meant that there would be bigger and better tournaments with international teams from across the world coming in. The only Major however scheduled to be in the region was the Galaxy Battles II Major which were to be held by Fallout Gaming. With SEA crowds and events having been some of the most explosive in the past, much was expected from this Major, that is until its Major status was rescinded by Valve. 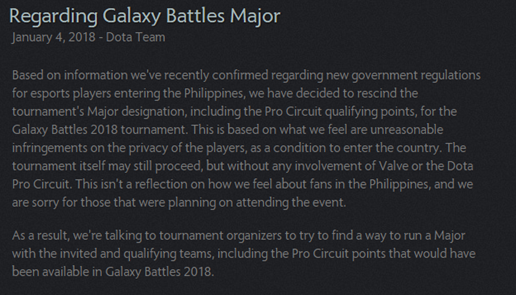 The tournament already had a bit of skepticism surrounding it but in the end, it was the laws set down by the Philippines government that required Valve to step in.

The tournament still went ahead as planned but many of the bigger teams like VP, Secret and even Liquid dropped out after Valve’s decision. Eventually VG.J would pick up the trophy in what was a pretty solid tournament in all respects, however, the SEA community will still be upset over the fact a proposed Major was taken right away from under our noses.

Not so pleasant - Major All stars

Another tournament related incident, this one took place in 2015 and was one of the bigger tournaments in SEA then involving teams like Na'Vi, NiP and iG. Not only was the tournament badly organized and managed, it was marred by technical difficulties and issues since day 1. Players and personalities complained of bad conditions and ill-treatment and the constant delays and changing schedules left a bad taste in everyone’s mouth. However, Fallout Gaming, the organizers behind the tournament seem to have learned from their mistakes and redeemed themselves via Galaxy Battles II.

Dota Talk is one of SEA’s biggest Dota 2 community platforms and has been for a while but one embroiled in constant controversy. They have often been accused of stealing content from other platforms/players and personalities, conducting fake giveaways and their owner Jaren Gan has been involved in some of the aforementioned questionable incidents in the SEA scene. Not only was he the owner of Arrow Gaming when the 322 incident occurred, but many people accused him of threatening them and using muscle power to get his way.

A particular ugly spat took place between him and Masterramen which was highly publicized and all over social media much of which can be seen in this interview with GosuGamers. 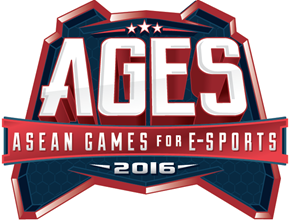 This tournament involved teams from the ASEAN region and boasted a significant prize pool of 250,000$. Thailand’s Signature.Trust would go onto win the event and win the major part of the prize pool. However, payments have still not gone through till this date with the organizers, Esports Malaysia often shifting blame onto their sponsors and delegating everytime the issue has been brought up. AGES was part of an initiative to bring together various SEA esports organizations such as PeSO (Philippine Esports Organisation), IeSPA (Indonesian eSports Association) and more. The event itself had a variety of issues ranging from delayed starts and false accusations against Face-it to blame shifting regarding prize pool payouts between Esports Malaysia and Platinum Eden. Things escalated to a point where the matter reached courts of law.

Today, the SEA Circuit boasts a healthy tournament circuit with teams capable of competing with the very best the world has to offer. Think we've missed out an incident? Let us know in the comments below or on twitter @afkgaming
About UsContact UsServicesRSS
DisclaimerAdvertise With UsArchiveEditorial Team